You are here: Home / Departments / RV Industry News / Hall of Fame to Induct Nine
This post may contain affiliate links or mention our own products, please check out our disclosure policy here. 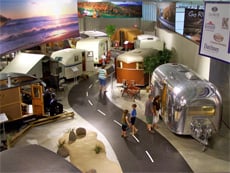 The board of directors of the RV/MH Heritage Foundation has selected nine people to be inducted in the RV/MH Hall of Fame at a dinner ceremony Aug. 5 at the Hall of Fame in Elkhart, Indiana.

The nominees include Lawrence C. Lippert, who built Lippert Components of Goshen, Indiana, into the largest component supplier in the RV industry; Kirwan Elmers, an innovator in converting bus shells to RVs, and Thomas Walworth, who has led Statistical Surveys of Grand Rapids, Michigan, to become the recognized official source for sales data in the RV and manufactured housing industries.

Also added to the Hall of Fame will be two deceased men who were RV leaders: C.M. Fore, the founder of the luxury RV builder Foretravel of Nacadoches, Texas, and Mathew Perlot, who pioneered the concept of an affordably priced diesel pusher and the automatic awning with Safari Motorhomes in Harrisburg, Oregon.

Others to be inducted are manufactured housing leaders Craig M. Bollman of Littleton, Colorado; Theresa M. Desfosses of Old Orchard Beach, Maine, and Thomas P. Meyers of Louisville, Kentucky.  Claude N. Palmer, a deceased housing retailer from Waverly, New York, also will be added to the Hall of Fame.