You are here: Home / Top Stories / Can High Winds Flip RVs Parked In A Campground?
This post may contain affiliate links or mention our own products, please check out our disclosure policy here.

by Rene Agredano
March 1, 2017March 10, 2018Filed under:
Table of Contents show
Can high winds flip RVs?
Is the wind over 180 miles-per-hour?
How to feel safer in heavy winds

Sitting out a wind storm while parked in a campground makes you wonder just how much force it takes to flip a RV. As your rig bounces around you’ll feel like a tornado magnet. But can high winds flip RVs?

There’s no need to panic. High winds can flip RVs driving on the highway but it takes a perfect storm to toss your rig when you’re parked. Here’s why. 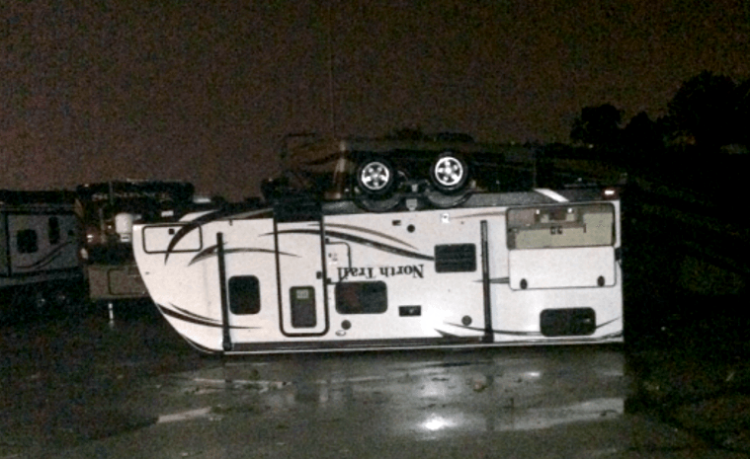 What does it take for wind to overturn RVs? Image: iRV2 member DandS

Each time you drive down the highway your RV is battered by high winds. As that moving air meets the front of your RV, it creates a high pressure that turns it into a force. The intensity of that force is known as “wind load” and all RVs can withstand a certain amount of it. 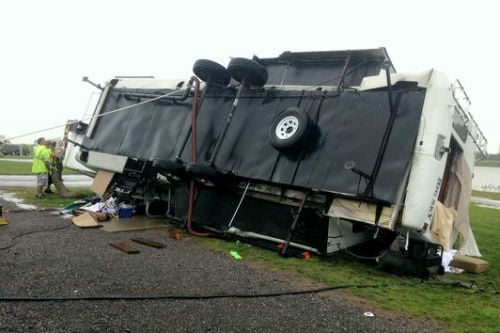 A RV over turned after a violent storm at a campground in Missouri. Photo by Oakman www.forestriverforums.com member

You need to do the math to calculate wind load on RVs, but you can drive in a straight line knowing that RV bodies can withstand head winds at highway speeds. Wind is more of a problem when it blows sideways against a vehicle in motion, which causes trailer sway.

When RVs are stationary, cross-winds also wreak havoc but for a different reason. Sideways winds can destroy awnings, ruin slide-out toppers and toss patio furniture. But unfortunately it’s difficult to be specific about how high winds flip RVs that are stationary.

The good news is that it rarely happens. Few studies about high winds flipping cars and RVs are actually available. However, a group of scientists did examine this concern in a report called titled: wind speeds required to upset vehicles. According to the report, whether a severe wind will upset a RV depends on:

In the remainder of this study, the scientists go on to share good news for RVers worried about heavy winds. They conclude that:

“The few instrumented vehicles exposed to severe winds indicate that stationary vehicles in open terrain are not upset by winds of about 45 m/s (100 mi/hr). . . Thus, it appears unlikely that a stationary vehicle will be upset by winds on the vehicle of less than 52 m/s (115 mi/hr). The probability of upset, and thus the percentage of vehicles upset, will increase as wind speed increases above 52 ms (115 mi/hr). At some wind speed, perhaps greater than 81 m/s (180 mi/hr), most vehicles in the wind field will be upset.”

How to feel safer in heavy winds

Many RVers who endured heavy wind storms verify what the scientists discovered. The weather is rarely so bad that high winds flip RVs. You can minimize the impact sideways winds have on your rig by doing the following:

The last step to feel more comfortable during heavy winds is to move your RV out from under any overhanging trees. Ultimately, your RV is at greater risk of wind damage from falling tree limbs than from the wind itself.