You are here: Home / Columns / Tech Tips / How to Stabilize Your RV
This post may contain affiliate links or mention our own products, please check out our disclosure policy here.

On walking through your RV, you may find yourself singing a refrain from “Rock Around the Clock.” It’s true, RVs, being built light for easy (and economical) travel, are not “rock solid” in camp. The longer they are, the more they tend to rock and shake as folks move about inside. To that end, most travel trailers and fifth wheels are equipped with stabilizer jacks.

On a fifth-wheel, the “landing gear” acts as a stabilizer up front, but additional stabilizers are typically found at the rear. Travel trailer fans, if you unhitch from your tow vehicle and rest the trailer on the jack foot, you’ll certainly know the lack of stability. Many travel trailers have at least four stabilizer jacks, some have more.

How can you safely and effectively use your stabilizer jacks? First, try and park on level ground as much as possible. That saves you from having to do a lot of wheel blocking. Prior to unhitching either a fifth-wheel or travel trailer, chock your wheels to prevent any rolling. On a couple of occasions we found that standard chocks can be woefully inadequate. Hearing the shout from occupants inside the trailer as I, as chief of setup, also watched the tongue jack foot slide a couple of feet as one of those chocks let loose was a remarkably frightening experience. Visions of the trailer rolling off downhill left me with a cold sweat. We finally gave up on triangle chocks and use stop chocks that go between the tandem tires and lock them against one another—and we use them on BOTH sides of the trailer. 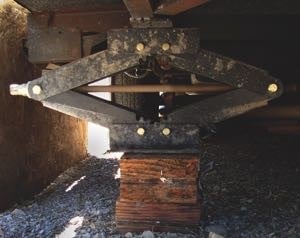 Stabilizer jacks are just as they are described: They’re for stability, NOT for attempting to level the rig, as you’ll find if you still have the original documentation for your stabilizers. So before you set out to deploy the stabilizers, you’ll need to ensure that you’ve already leveled your rig properly.

Assuming you have your stabilizer jack instructions, we urge you to read them closely and carefully. But it’s more likely you’ll be like us, and find the original owner lost the paperwork, so we’ll fill in some general guidelines here.

First, on the subject of jack pads. It’s not a bad idea to slip a piece of wood between the bottom of the stabilizer jack and the ground. It can protect asphalt from damage, and on mooshy ground, prevent the jack from digging into the terra-not-so-firma. HOWEVER, there is a danger of using too much blocking. 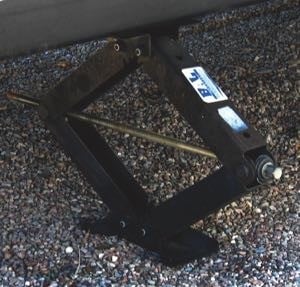 Right way: The jack is extended in a way that allows for maximum load carrying capacity. Photo Credit: Russ and Tina De Maris

Here’s a position on which we’ve had to personally repent: Scissor style stabilizer jacks have their rated strength ONLY after being extended out to a certain point. Here’s a quote from one jack manual: “This jack’s weight capacity is 5,000 lb. only between 13-3/4” and 23-1/2”; the weight capacity drastically reduces as the height drops below this level. Do not apply a load to this jack below 13-3/4” in height.”

In the past we’ve used stacks of blocks under our stabilizer jacks, in part because there was less work involved—don’t have to run the jack out so far. But with this information in hand, we now use much less in the way of blocking. Yes, scissor jacks can get wobbly if extended w-a-y out. Therefore, a higher stack of blocking might be in order if you have a long way to crank out the jack.

So crank out the scissor jack until you hit resistance. Then turn the crank another rotation or so and call it good. Don’t try to crank the trailer up, and NEVER use a stabilizer jack to raise your trailer for tire changing. If it lets go at the wrong time, serious damage to the jack (not to mention the jack’s owner) can occur.

We’ve found that it was easier to repent of our past stacks of blocks misdeeds when we knew that the work would be lighter. We now use an electric drill, equipped with a “power wobbler” that allows us to install a ¾-inch socket on the drill, which fits right onto the stabilizer jack to drive it up or down as required. Using a battery-operated drill is great, as you can set the torque on the drill and not overdo it.

We also have a few “stacker” jacks that we stash away in our storage area. These critters are portable units that use a screw type device for assisting with stabilizing. Here, place the head of the jack directly under the trailer frame, NOT under an axle. Crank the jack to the resistance point, and then add another turn or two.

Properly using your stabilizer jacks can make life a lot more comfortable in the old rig, and reduce the costs of damages incurred when ignoring stabilizer jack manufacturer recommendations.

Check out Russ and Tiña’s Internet blog on a variety of RV topics at ICanRV.com.