You are here: Home / RV Trailers and Motorhomes / I Drive The 2011 Monaco Vesta
This post may contain affiliate links or mention our own products, please check out our disclosure policy here.

The first time that I saw the 2011 Monaco Vesta was at the Louisville RVIA Exposition this past December. At that time my impressions were that Monaco RV LLC wanted to make a statement and step away from the usual box appearance that so many motorhomes manufacturers present nowadays. Monaco states that Vesta is fully vertically integrated thereby giving Monaco complete control over all aspects of the vehicle engineering beginning on the drawing board to the modeling shop to prototype development and then on to production.

I recently attended the Family Motor Coach Association (FMCA) 85th Annual Family Reunion and Motorhome Showcase in Perry, GA. From vendor parking area we could see the demo lot. Looking at a row of perhaps 25 or more motorhomes, one would be hard pressed to identify one brand from the next at a distance. Now when your eye makes contact with the Vesta, there’s no mistaking what you are looking at. The statement that is conveyed by the styling alludes to a creativity that is typically missing by the common look of so many RVs in the industry. You can stand on a street corner and watch a dozen RVs go by with little to differentiate one from the next aside from minor suggestions of styling. A bold step, an attention grabber and a head turner is what can be said about Vesta even when the most casual observer sees one coming down the road.

When I arrived at the rally and saw a Vesta in the demo lot I was determined to get a test drive since I had read and seen so much about it in the press releases that I have been putting up, but this would be my chance to get hands on. While setting up a display area in aisle 700 at the FMCA Show, I happened to see Ryan Lee walking past who is the Marketing Director for Monaco RV LLC. Ryan approached looking for the MaxxForce crew which at the time had just left the display area for the evening. Ryan recognized me from Louisville and in our conversation I asked him if it would be possible to take a test drive in the Vesta. Ryan responded that he would be able to do that and he would call me with a time. Later that evening, I did get the phone call and a time had been set for tomorrow to take the test drive. 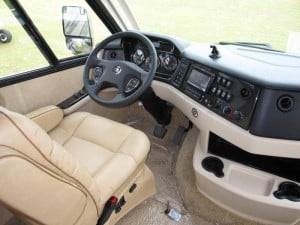 The Vesta driver’s compartment is well appointed. The push button shifter is on the right of the steering wheel on the dash and the flat panel radio display is visible just to the right. The leather wrapped steering wheel contains the most commonly used controls in left and right pods.

The day was like a blur and before I knew it, my 2:00pm time slot came around. I gave the guys that I was working with a nod sort of speak and I began making my way over to the Monaco Exhibit which was located in the coach display area. At the rally there were over 260 display coaches of all types. The largest dealership at the rally was Lazy Days and they had staff in all the manufacturer brand exhibits that they sell in their stores. When I arrived at the Monaco exhibit, I saw that both Vesta models the 32PBS and the 35PBD motorhomes were in front of the display as well as majority of the full line of RDP coaches that Monaco RV currently builds. At the appointed time I met up with Ryan and we hopped aboard a golf cart and made our way out to the demo lot. As we arrived at demo parking and I took the opportunity to take a quick photo before we climbed aboard.

The Vesta is described as being powered by a front engine, MaxxForce7, twin turbo V8, in cylinder, 2010 emission compliant engine featuring 260HP and 660 lb/ft of torque. The engine is coupled to an Allison 2500MH 6 speed electronic transmission with a rear axle ratio of 4.78 to 1. The Vesta has a GVW of 29,000 pounds and a combined rating of 33,000 pounds which is available on a 220 or 265 inch wheelbase. Reportedly, the Vesta’s fuel economy gives it a 550 to 600 mile range using its 51 gallon fuel tank. Equipped with 4 wheel ABS air brakes and a 4 bag air ride auto leveling suspension, the Vesta takes safety and comfort quite seriously. Featuring a 6,000 hitch, owners will have greater options in choosing a suitable toad that meets their needs.

The seating surfaces in the Vesta are all leather and the cockpit is very well instrumented and features a steering wheel with controls for the horn, radio, wipers, cruise and lighting. Although the Vesta is designed to be measurably narrower and less high than a typical Class A motorhome, the 80 inch ceiling height does not convey the sense that the vehicle is smaller in any way. For a complete listing of specifications please click on the following link …. Standards and Options. 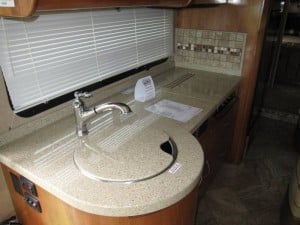 The Vesta galley space is adorned with hard counter surfaces and tile back splashes. The fully tiled floor is seen as well. MCD shades are used throughout.

Entering the vehicle from the mid-ship door the tile floor takes you to the carpeted cockpit which guys like me would appreciate since we don’t often like to drive with our shoes on. The leather driver’s seat holds you comfortably while the steering wheel is adjusted. Turning the key to the ON position awakens the instrument panel as the diagnostics run through their routines. Continued clockwise pressure on the key causes the starter to engage and the engine fires up quickly. The insulation in the doghouse and firewall of the Vesta is well implemented because the sound of the 6.4L diesel is not at all obtrusive.

Applying the brakes, the parking brake is released via the air brake release button and a gentle push on the shifter panel into D imperceptibly engages the drive train. Releasing the brake brings in the majority of the available torque at idle and the motorhome begins to inch its way forward on the uneven terrain of the parking lot. A slight push on the accelerator hastens our arrival on the paved surface of the entry road and we continue to make our way out of the fairgrounds. Applying the brake for me was a bit difficult since I am used to a heavy foot on a hydraulic system however on this air brake system the slightest touch of the brake pedal brought in a lot of brake. I knew that this would take me a little more time to come up to speed on applying the brakes.

The ride was excellent as we motored along the access road and into a 180° right hand turn to make our way out onto GA 26. As many of us are familiar with the entry ramp at Exit 127, it descends onto the I75 with a pretty good slope. Getting on the accelerator moved this vehicle out quickly and by the time I got into the granny lane we were exceeding the posted speed limit. In regard to gradual acceleration, I did not see that at all and this engine felt very much like it wanted to wind up easily and move out smartly. During the acceleration phase the engine sound was not all that severe as one would imagine with a front engine placement. I was quick to remark that the engine sound between the gasoline engine that is in my motorhome and the MaxxForce7 was not at all out of proportion when entering the Interstate.

Quickly achieving highway speeds the directional control of the Vesta was quite unremarkable as it tracked straight down the road. At speed, the engine sound was noticably toned down and a normal volume of conversation between driver and passenger was enjoyed. The large leather wrapped steering wheel was comfortable to the grip and the steering inputs were well mannered and precise. The instrumentation is complete however it would take me a bit more time to memorize the locations of all the gauges. The radio displays a full panel of information when it’s not rendering images from the color turn signal and backup cameras. 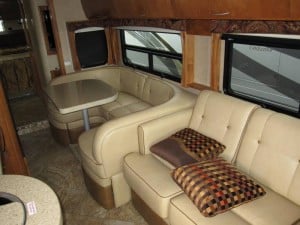 The seating in the Vesta features all leather seating surfaces. Seen with the slide in, one can move from front to rear without any problems. Note the details in the seating and the walls and how everything seems to blend in. A large flat panel TV is on the wall directly behind the slideout.

Driving down the road the ride was comfortable and I would say that one would be hard pressed to find fault with how the vehicle handled while being passed by trucks and impacted by side winds which were obvious by looking at the trees. On our test drive the sky opened up and I had the opportunity to try the wipers on the one piece windshield. For all intents looking out of the windshield gave the illusion of driving a large SUV. As we continued to make our way north, we exited the highway and although absent an exhaust brake a downshift to 4th did provide a reasonable amount of deceleration, coupled with the air brakes, (which by now was getting accustomed to), brought the vehicle to a effortless stop.

On our southbound return trip I engaged the cruise control and set it for 65 MPH. For the entire time that we were on the road, the Vesta maintained that speed and never downshifted. Observing the speedometer and the tach while negotiating a slight grade not 1 MPH or RPM were observed to have changed. This I reasoned is entirely due to the light weight of the vehicle and the 660 lb/ft of available torque of the engine.

As we exited on the southbound side of where we entered the highway, I had a new appreciation for what the MaxxForce7 engine and Allison transmission would deliver to a new owner. Personally I could easily make the transition from my motorhome to this one because the handling and performance of the powertrain was more than I expected. The trends that are seen by today’s RV buying public, suggest that they are moving into smaller and more fuel efficient vehicles. The Vesta is slightly smaller on the outside and large enough on the inside for comfortable living. Although I did not have the opportunity to evaluate the MPGs ratings, comments offered by the ferry driver indicate that the mileage on the vehicle on the way to the event was better than he expected. I expect that the Vesta and its companion alternate the Holiday Rambler Trip will be a big hit for 2011.