I weaved my way through town and headed out toward our closest stream. Where the sunshine hit directly, the road was pretty clear, but the curves, shaded areas, and bridges were skating rinks. I made sure the truck was pointed straight going in and then eased through the icy patches. The trip usually took about ten minutes, but I devoted most of half an hour to the journey.

All Alone
The parking lot was empty when I finally reached the stream. Folks from the city weren’t about to challenge the passes in this weather, and the locals didn’t want to take the chance either. I broke some ice in the lot as I got my gear out of the truck bed, and eagerly headed downstream. Out this far the weather was even colder than in town and I crunched through almost eight inches of powder as I ambled slowly down the path. Mine were the only fresh tracks; I had the whole stream to myself!

The water level was just right, high enough to hide the fish and move the lure, but clear and low enough to keep fish in the holes. My first effort was on the tail end of a big hole. I didn’t wear hip boots or waders this trip, I opted out for comfort with some warm waterproof boots, but that limited my access a bit. I made a cast from a high bank and watched my line slide through the slot.

“Whack!” The rod whipped downward as a big fish took my corkie. I leaned as far out on the bank as I could to keep my line clear. The fish charged up and down, going airborne a couple of feet. The red stripe on his side was in bright contrast to the white wonderland surrounding the little stream. After the fish tired a bit, I worked my way down to the streamside and beached the big buck. I gently guided him up on the snowbank, took a quick picture, and released him to spawn. He was a bit too dark to keep, but I was happy—catching a fish on a day like this was a real treat.

Keeping Warm
I headed downstream and tried a few runs with no success. I was glad that I had taken my Filson cap with the wool earflaps. I usually reserved it for frozen duck hunts but the 28-degree weather was pinking up my nose and I was glad for the warmth of the headgear.

Finally I reached my last good hole, and cast into the bubbling cauldron. The line backlashed a bit as my chilly fingers were a little slow to react. I was unlooping it from a little bolt on the side of the reel when my rod nearly jumped out of my hand. A huge silver shape charged out of the white water and headed downstream. I set the hook and it exploded on the surface, sending a spray of silver over the icicles hanging from a streamside alder branch. This was exciting, hooking a big fish in the prettiest hole on the river!

I had my doubts about landing this brute. I was up on a bank, four feet above the stream, and there was no decent streambed to beach the fish. But I was a long way from getting this one anywhere near the shoreline. The big hen was using the current to help her escape efforts. She’d swim upstream into the pocket of boiling water and hold tight to the bottom. When I put enough pressure on the line to make her move, she’d charge downstream, tailwalking along the current, swinging her head to throw the line. Every time she bolted I was sure she’d throw the hook.

Then, as I was trying to gain line, everything stopped. I was cranking the reel, but nothing was happening. I looked up at my rod tip to see if the line was tangled. It was clear, but then I saw the ice shining from my guides. The air was so cold that the water was freezing in the eyes of my guides, locking the line to the sides! I plunged my rod into the water. Even though the stream was plenty cold, it was warm and fluid enough to melt the ice and free my line. During the battle I had to repeat the effort half a dozen times as my guides would ice up.

Worth the Effort
The fish gradually started to tire. As I brought it closer, I could see it was a bright fresh hen, great for eating and for bait eggs. Picking a spot where the water was shallow, I lowered myself to the river. The icy liquid was right at my boot tops, but I figured to call it a day after I landed the fish, so I could stand a few minutes of wet pant legs. My first effort to beach her proved futile. As she neared the bank, I tried to lift her between my feet and the bank so I could pin her to the steep clay wall. As soon as her stomach touched the gravel she took off for deep water, right between my legs!

I threw my right leg into the air, clearing the line from my boot and giving the fish a clear path downstream. The water splashed and I managed to get soaked clear up to my crotch, but the fish was still on. We replayed the scenario, (a little less dramatically) a couple of more times before I was finally able to wedge her against the bank, get my fingers in the gill plate, and throw her up to the deep snow on the ridge above.

She was a beauty, nearly three feet long, weighed in at a touch over 15 pounds, and was my best steelhead of the season. As I walked back to the truck I couldn’t help smiling. Here I was, in a scene from a Christmas card, bringing home a fine fish and a couple of really good stories. It was well worth the effort it took to challenge the icy roads. 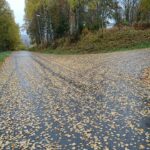