You are here: Home / Top Stories / Idaho’s Hidden Gem
This post may contain affiliate links or mention our own products, please check out our disclosure policy here.

Spectacular scenery, abundant wildlife, year-round recreation and rich history define Harriman State Park in the Idaho town of Island Park, 28 miles south of West Yellowstone, Montana. Many tourists are unaware of what lies tucked away just off Highway 20 as they wheel past on their way to Yellowstone  or Grand Teton National Park, but this is a hidden gem that should not be missed.

In The Beginning—The Railroad Ranch
It was the turn of the century, and Island Park had already been discovered by early homesteaders, who established ranches, raised cattle, operated fish farms, ran stage stops and offered guide and outfitting services. The area became popular as a retreat for wealthy families, who built summer homes. Weather conditions were extreme, and that led many enterprises to fail. One such failure was a cheese factory operated by Swiss homesteaders.  Unable to sustain their business, they sold their land and holdings to several investors associated with the Oregon Short Line, a subsidiary of the Union Pacific Railroad.  In 1902, these early investors formed the Island Park Land and Cattle Company to raise and sell livestock, but they also began to develop their ranch as a sporting retreat. And fittingly, due to the shareholders’ occupations, their retreat became known as the Railroad Ranch.

The Harriman and Guggenheim families were long-term shareholders. Three Guggenheim brothers bought shares soon after the ranch’s inception, and one of them, Solomon Guggenheim, visited the ranch often with family and friends until his death in 1949. In 1908, E. H. Harriman, chairman of the Union Pacific Railroad, bought Morris Guggenheim’s share and cabin sight unseen, at the encouragement of another shareholder, Silas Eccles. Harriman died the next year without ever visiting the ranch but his widow, Mary, and three of their children, Averell, Roland and Carol, became regular visitors.

W. Averell Harriman had an extraordinary career as businessman, diplomat and politician, serving as U. S. secretary of commerce and governor of New York. He also was the developer of Sun Valley Resort in Idaho. His partner in investment banking was his brother, E. Rowland Harriman, who also served as president of the American Red Cross and trustee of the Boys Club of New York and the American Museum of Natural History. Another shareholder in the ranch was Charles Jones, who purchased Solomon Guggenheim’s holdings after his death in 1949. Jones was president and chairman of Richfield Oil Company, one of his last projects being the merger of Atlantic Oil and Richfield, known today as ARCO.

For decades, the Railroad Ranch was a working cattle ranch as well as a hunting and fishing retreat for its wealthy owners, but the time came when they no longer wished to operate the cattle ranch and maintain the property.

Preserving and protecting this prime wildlife habitat was a concern for all of the Railroad Ranch shareholders and prompted the philanthropic Harriman family to donate this spectacular property to the state of Idaho. The transfer process was a long one, with much discussion of how the land was to be managed and wildlife protected.  Provisions of the agreement also stipulated that the staff be professionally rather than politically chosen, which led to the formation of the Idaho Department of Parks and Recreation in 1965.  After years of negotiation, the ranch became a state park in 1977 and opened to the public in 1982. 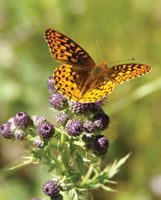 Year-round recreation opportunities abound in the 11,000-acre state park.  Thousands of anglers are drawn to the North Fork of the Snake River, more commonly known as the challenging Henry’s Fork, one of the best fly-fishing streams in the nation.  This blue-ribbon, world-class trout stream meanders eight miles through the park, also providing a tranquil, non-motorized waterway for drift boats, kayaks and canoes.  Visitors who enjoy hiking, biking and horseback riding can navigate more than 20 miles of trails that snake through meadows, crawl along riverbanks and wander through forests. With trails of varying length and difficulty, there is something for everyone.  In winter, an average annual snowfall of about nine feet turns the park into a wonderland for cross-country skiing and snowshoeing. The historic Jones House serves as a warming hut on winter weekends.

The park offers many opportunities for photography and wildlife viewing, so if a little slower pace is your thing, take a leisurely stroll through the woods or around one of the lakes, and be sure to bring your camera.  Moose wade in shallow ponds or hide just off the path; sandhill cranes glide across open meadows, and elk and deer gather at the forest edge. The elegant trumpeter swan, the largest North American waterfowl and one of Harriman’s main attractions, graces the lakes and rivers year-round. Two thirds of the wintering trumpeters in the U.S. spend the season at Harriman State Park, thanks to the foresight of Roland Harriman in creating a wildlife sanctuary for the previously endangered birds.  And as you walk through this historic refuge on a summer day, you’ll be surrounded by the pinks, reds, whites, yellows, purples, and blues of some of the most beautiful wildflowers in the country.  Our first visit was after a late winter and wet spring and the wildflowers were exceptional, lining the highway as well as blanketing most of the park. 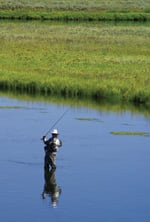 Aside from the unparalleled recreation, a visit to Harriman State Park provides a walk back in time. During the summer, tours of some of the historic buildings are offered, allowing visitors a glimpse into the lives of the wealthy owners and providing an interesting insight into the historic Railroad Ranch.  Additionally, a few of the buildings are open as rentals, offering comfortable, charming accommodations in the heart of this recreational wonderland.  Imagine spending the night where the cattle foreman or ranch manager lived so many years ago!  Facilities range from smaller cabins and yurts for intimate getaways to large dorm-style housing perfect for family reunions. Whether or not you consider yourself a history buff, Harriman is a special place where you can do more than just read about history; you can feel it and experience it.

Jill Iuculano is a writer, photographer and full-time RVer.

IF YOU GO:
Harriman State Park is 18 miles north of Ashton, Idaho, on the west side of Highway 20.  For information, see parksandrecreation.Idaho.gov/parks.harriman or call (208) 558-7368.