You are here: Home / Top Stories / A First-Timer’s Look At An RV Rally
This post may contain affiliate links or mention our own products, please check out our disclosure policy here.

by Patrick Buchanan
October 11, 2019Filed under:

I recently attended my first RV rally. I had the unusual distinction of being both a rally club member as well as a sponsoring vendor. Even more unusual was the fact that I flew into the rally location, previous commitments keeping both my wife and our diesel pusher at home.

Held at Ocean Lakes Family Campground in Myrtle Beach, South Carolina, the 100 rigs that showed up with 200 or so very active forum members represented just a portion of the regular members from the popular iRV2 forum (www.iRV2.com), a part of RV LIFE.

iRV2 regularly has several thousand of it’s nearly ¼ million members online at any given time. Surprisingly, roughly 70% of this year’s group were first-time iRV2 rally attendees, myself included, an iRV2 member for 5 years. 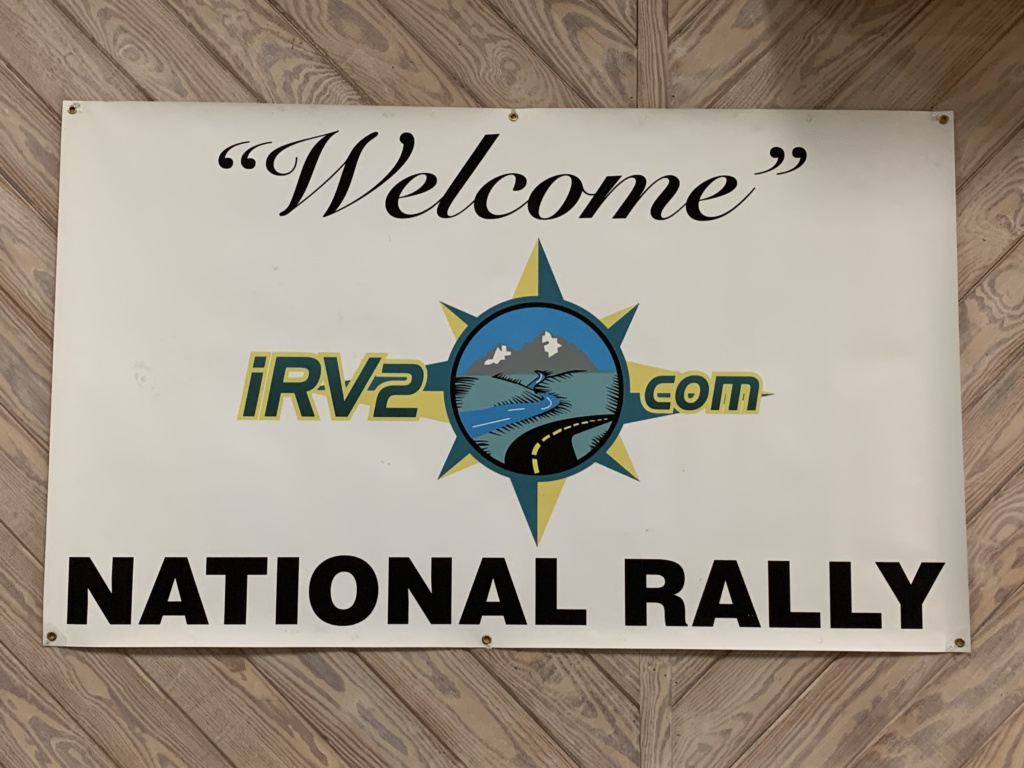 What struck me as a newcomer was the bond and familiarity shown amongst all of the members, including us first-time attendees. This speaks volumes about not only the RVing community, but of the strong online ties that regular participation in a forum such as iRV2 can build.

Whereas social media often has an instant shallowness to it, committed forum members have much deeper digital relationships. Seeing folks IRL (In Real Life, for you Sandra Bullock fans) that you have conversed with for months or even years is a fun and rewarding experience. This group was very comfortable together, sharing laughs, stories, and prayers. 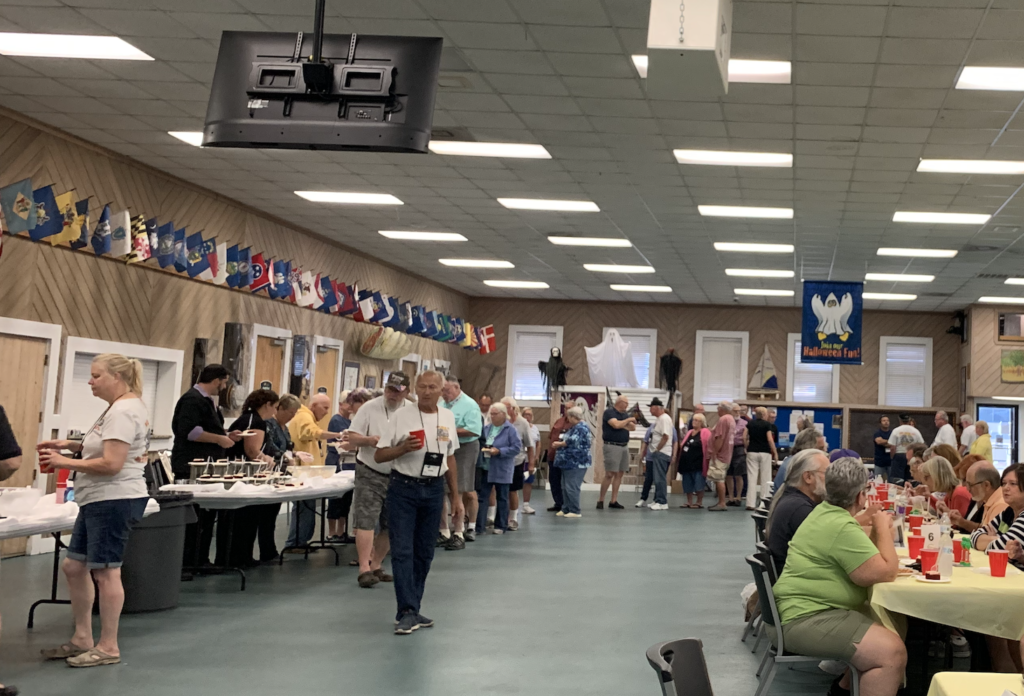 Group meals were few, but spirited, with folks jumping in as volunteers to serve food as needed. Here too the camaraderie was evident, and the relaxed atmosphere was the epitomization of the selflessness and togetherness that often defines the RV lifestyle.

RV rallies always have a commonality that brings people together. For some, it’s the brand of their RV or club they belong to that joins together the mutually interested. Here, participation in the iRV2 forum is the tie that binds.

RVers not only had their names on their rally name tags but their iRV2 profile name as well. Clever names such as “DriVer”, “NLOVINIT”, and “Lady Puffin” offered clues to participants’ online personas. 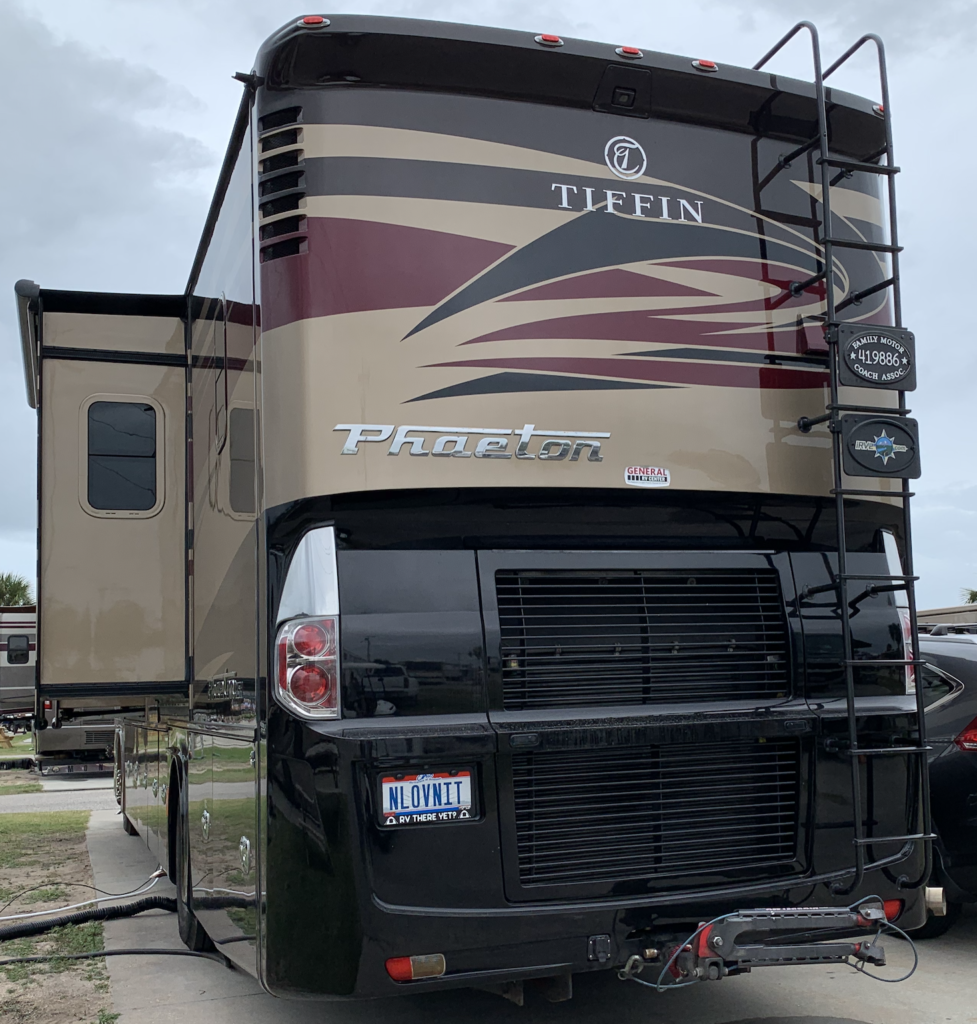 Not having my motorhome available, I couldn’t throw chairs out under my awning and lure in curious passerby, so I opted to cruise around the vast property in one of the rental golf carts. Cruising up and down the rows of beautiful RVs made me homesick for my own camper, but also offered a great view of folks getting together, hanging out, and swapping RVing war stories.

Whether it was getting a meal outside the property or checking out one of Myrtle Beach’s many attractions, people wanted to do things together. However, a few newcomers would have preferred more on-site meals to get to know and be part of the group as a whole.

Bingo, likely to be a rally game for another 50 years, was supplemented with an iRV2 rally favorite called Gotcha, which was apparently complicated enough to require training and a practice session. A two-hour presentation about cooking with the new electric pressure cookers was a big hit as well.

The rally dinners were good, alternating between catered and on-your-own, providing a chance for members to hit the town together or hold a campsite potluck. Meals together always included drawings and giveaways, and RVers became one with the collective as rally T-shirts made their way from the goody bag to member’s backs. 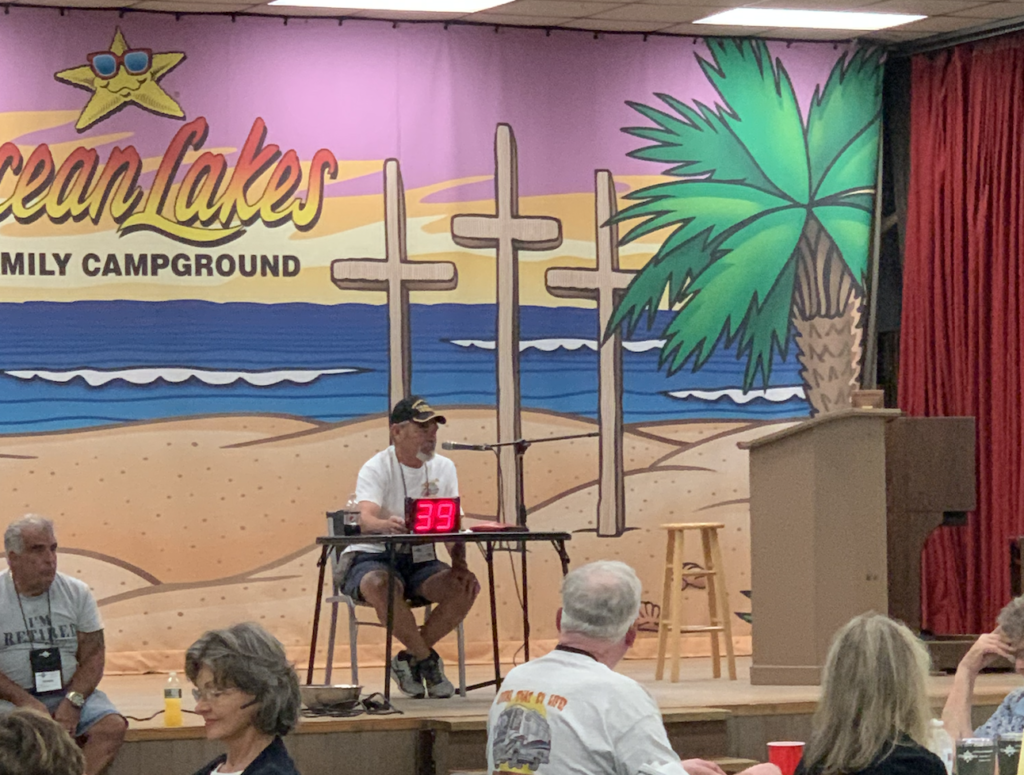 I had to fly out before the final dinner, entertainment, and awards commenced but based on my four days there, I trust it was fun and meaningful.

Though small in scale, this rally was big on heart. While it didn’t have on-site service techs and dozens of vendors, it was representative of the small club rallies that happen all over the country every week. With large RVing clubs reporting huge numbers for their big annual rallies, it’s clear that the classic RV rally is not dead.

The question becomes, what will entertain the next generation of RVers? A younger demographic would require school-friendly rally times during peak periods that campgrounds typically don’t allow.

What types of activities are today’s newest generation of RVers going to crave, or require? Will a laid-back schedule with lots of downtime work with the upcoming always-on age group, or will the RV rally continue to be an activity for empty-nesters north of 50?

Time will tell. Until it does, I’m ready for another rally.