You are here: Home / Top Stories / Is Joining a Caravan Worthwhile?
This post may contain affiliate links or mention our own products, please check out our disclosure policy here.

{mosimage}Still, my husband and I had several reservations. We like being by ourselves and enjoying each other. We like to do what we like to do: sleep in, eat at nice restaurants, enjoy quiet time and not have any responsibilities. Sometimes we don’t want to participate or be obligated. Part of being an RVer is to be free to do what you want, when you want. And, finally, I have a job! Although my husband is self-employed, I work at RV Life, where my job is to make sure the bills and people get paid.

After talking it over, we agreed that joining the caravan would be worth the cost and effort, since we would never discipline ourselves to see and experience these great rivers, lakes and mountains on our own. I contacted my publisher and explained that I wanted to take off for three and a half weeks to go on an RV caravan and rally.  Well, this is what RV Life is all about, RVing!  My boss said, “Just remember to come back.” I promised I would.

{mosimage}The price to join the caravan was $1,050 per rig and included 13 stopover days, all RV camping (except for a stay at Apgar campground in Glacier National Park), and several meals and tours. The caravan leader based the price on the actual cost, plus scouting expenses and a small budgetary buffer, and anticipated that 25 rigs would sign up. But only seven rigs committed to the trip. Nevertheless our leader was willing to go ahead with the caravan, operating without a buffer for unforeseen expenses and assuming any extra cost. In the end, one planned excursion was canceled when a tour boat broke down, and we wound up getting a small refund.

Organizing the Caravan
Our caravan met near Wenatchee, Washington, at the Wenatchee River County Park.  After everyone was parked, we all got together for a driver’s meeting, where our leader passed out binders with our daily schedules mapped out. Our book included maps, points of interest, an activities calendar, rules and biographies.

Our leader, a retired Boeing manager, had scouted and mapped the trip and made all the reservations. The plan for the caravan was for the leader to start out, followed by everyone else, with a couple designated as assistant leaders following behind like a caboose to make sure everyone was present and accounted for. The assistant leaders also had the job of making last-minute safety inspections before departure, so that no one would take off with their steps down, their antenna up, or their clothesline attached to a tree.

{mosimage}Later we all introduced ourselves, and got acquainted. Of course, we already had something in common—we owned Airstreams!

Trouble on the Road
The next morning, the caravan left for Dry Falls, Washington. The Columbia River Basin was a must-see on our journey. From there, we headed for Blackwell Island RV Park in Coeur d’Alene, Idaho. Shortly after leaving Dry Falls, the first problem arose. The truck carrying the assistant leaders broke down.  There was nothing that could be done to help, and our leader made the decision for us to continue on, while the assistant leaders’ truck was towed to Moses Lake. The rest of us arrived in beautiful Coeur d’Alene, and we were happy campers, even though the food for our dinner was in the rig at Moses Lake. We all found nice places to eat on our own, and saw beautiful Lake Coeur d’ Alene.

Our leader asked my husband and me to fill in as temporary assistant leaders. Oh no, here came the responsibilities we didn’t want!  How were we going to keep all these people in line?  Nevertheless, we were up the next morning to make the safety checks, and everyone drove off to Sandpoint, Idaho.

I thought Sandpoint was going to be just another place along the way.  I was wrong.  It is wonderful. The town has a lot of interesting and beautiful sights, and I recommend it as a destination. We stayed in Hope, about a half-hour from Sandpoint, in a rustic RV park with plenty of deer amid an animal preserve. We had some time to explore by ourselves, and found a nice sandwich shop on the lake and ate and sipped on cool drinks while drenching ourselves in the sunshine. It had been a cold winter in Seattle—finally my feet were warm.

Meanwhile, the assistant leaders got their truck fixed and let us know that they would be catching up with us. The caravan met at the floating restaurant in Hope.  Our assistant leaders arrived to a standing ovation just in time to enjoy a wonderful meal. They had spent two days in Moses Lake, but their truck now had a new starter and alternator, and they were ready to go.

The following day we enjoyed a cruise on Lake Pend Oreille. This area is so beautiful I think I want to live there, but I promised my publisher that I would return.

Meeting Friends
In Hope, my husband found an old friend of his, Ray Millard. Ray and his wife, Carol, invited us to join them for dinner at an RV park they run. We had a gourmet salmon dinner in their beautiful home at Trestle Creek RV Park. They have a great house alongside a rushing creek, living the American dream.  Ray says the “best thing is meeting RVers; they are the greatest people in the world.”

{mosimage}The next day, we headed for Polson on Montana’s Flathead Lake. On our way, we stopped at St. Ignatius Mission on the Flathead Reservation.  In 1831 an Indian delegation went to St. Louis requesting missionaries for their people.  It wasn’t until 1854 that their beautiful church was built. The mission has frescos that are breathtaking. They were done by Brother Carignano, a cook at the mission who had no formal art training.  If you can’t go there, you should read about this place.  It is like no other.

The next day we were off to Glacier National Park, where we stayed at Apgar campground. At Glacier, our leader and his wife could not open the door of their RV. The locking mechanism had worked its way into a permanent “locked” position.  What to do?  Everyone in the caravan had an idea.  Several plans of action were considered. Could we pry this, or open that?  The Auto Club could not help, and there was no cell phone service.  After much thought and planning, the assistant leader came through with a plan, and he became the hero of the day. We shall not disclose the solution for security reasons, as we don’t wish to promote larceny, but the door was opened and our leader and his wife were saved from having to sleep outside with the bears. This is an important point I want to make. The more people around you, the more resources you have. These frustrating moments had turned into a very funny memory.  We all had each other, and it made us all feel safe.

More Trouble
On to Helena, Montana. We drove Highway 2, around the southern end of Glacier National Park to the continental divide. We had stopped for a photo opportunity when I noticed a truck’s engine was boiling over onto the road. Someone had filled the radiator overflow tank and forgot to replace the cap. Again, a group effort saved the day. The liquid was replaced, the cap was secured and we were off to Helena for more adventures, and a cruise along the Missouri River Gorge.  Our caravan arrived in Bozeman safe and sound.

After this trip, there was no doubt in my mind that a caravan, or a tour, is without a doubt the best way to go. It is safer and you get more for your money. The camaraderie is fantastic. Whatever brings you together is the substance of what you have in common—that might be the kind of rig you have, or where you are from, or where you are going. It keeps you focused, organized and on time. Your adventure is much more valuable. Your leaders are there because they want to be there. They are experienced and have taken much time to make your trip the best it can be. My husband and I are ready to sign up for the next caravan.  Maybe I shouldn’t let my publisher know that. n

Karen Meredith is the office and accounting manager at RV Life. 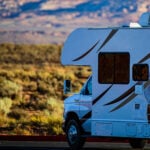 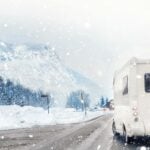 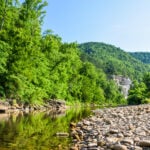 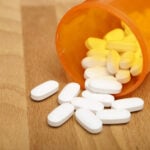