You are here: Home / Top Stories / Island Delights
This post may contain affiliate links or mention our own products, please check out our disclosure policy here. 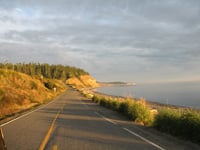 Whidbey and Camano islands, roughly 35 miles north of Seattle, are billed as “The Shortest Distance to Far Away.” You can relax at sandy beaches and campgrounds, play golf, go fishing, drive along farmland and meadows and explore fascinating small towns.

Whidbey is Washington state’s largest island with nearly everything but mountains rolled onto a 35-mile by 12-mile piece of real estate.  To Whidbey’s east, considerably smaller Camano Island doesn’t have any mountains either. But you will be blessed with unparalleled mountain views if you lift your eyes on a clear day to the northeast to see the Cascade mountain range and majestic, snow-covered 10,795-foot Mt. Baker.

Whidbey Island has two south entrances by ferry, either from Port Townsend on the Olympic Peninsula to Coupville or from Mukilteo, north of Seattle, to Clinton. The easiest route leads to the north end of the island by driving west from Interstate 5 on State Highway 20 and then south over the dramatic two-span Deception Pass Bridge. The bridge is always teeming with sidewalk photographers taking treasured photos for the family album. This bridge, listed in the National Register of Historic Places, is 200 feet above the turbulent channel that connects the Strait of Juan de Fuca with the Saratoga Passage.  Do not miss a sunset jet-boat tour through the pass whirlpools to hear the historic tales as only guides can tell them.

Nearby Deception Pass State Park is both a marine and camping park with 77,000 feet of saltwater shoreline, and 33,900 feet of freshwater shoreline along three lakes. Rugged cliffs and old-growth forests provide another dimension. Just beyond that is the Naval Air Station Whidbey Island, originally commissioned as an active U.S. Navy installation in 1941. 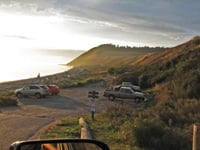 The Whidbey Island Scenic Isle Way is the first USA Scenic Byway completely on an island.  It follows two-lane state routes 20 and 525 through gently rolling farmland and meadows and along lakes and coves to a variety of small communities. For a more relaxing visit while you take in the sights, board a bus. Bus routes, schedules and stops throughout the island are convenient and free.

Preserves, reserves, passages, and points of interest—Camano and Whidbey have them in abundance. On either island, you are never far from a state park for picnicking or RV camping. The Island County fairgrounds and several private RV parks and resorts offer the amenities. If you aren’t into camping,  you will find cabins or bungalows, and bed and breakfast or inn possibilities in profusion.

Fort Casey (established in 1900), Fort Worden at Port Townsend (1902), and Fort Flagler on Marrowstone Island (1899) were all part of a 106-gun naval defense system known as “The Triangle of Fire.” The forts, created to guard Puget Sound and Bremerton’s naval shipyards, installed disappearing guns.  Once discharged, the guns were pulled out of sight, quickly reloaded, then swung back into place for shooting again.  Fort Casey has a pre-World War II fort with battlements and tunnels to explore, as well as the Admiralty Head Lighthouse.

Retro Park
Camano Island is quieter and more relaxed than Whidbey. It can be reached from Interstate 5 by taking Exit 212 and driving west on State Highway 532. The island’s Cama Beach State Park offers a 1930s-style fishing resort with rentals, and the Camano Island State Park has an underwater park for scuba diving. Check out this island’s remarkable history of sawmills and lumbering and if you wake up some morning feeling less like yourself and more like, say, Tarzan or Jane, you might enjoy the following:

The Canopy Tours Northwest features a zip line, but the story goes deeper than that. The Kristoferson Family bought the land in 1912, and they are using this new activity as a means to save their farm from development. They want to continue forest management and keep the land unspoiled for upcoming generations. Canopy Tours has forest trails, a swinging log bridge, and six double-cable zip lines. Other than this tidbit of information, you’re on your own to experience a little zip.

Isaac Ebey, the first European-American settler on Whidbey, claimed he “raised the best potatoes, onions, carrots, cabbages, parsnips, and peas on the Pacific.”  In 1978, local residents and committed citizens came together to protect Ebey’s Prairie, a rural working community on central Whidbey Island, from being developed. Their hard work established our nation’s first historical reserve.  Ebey’s Landing is a non-traditional unit of the National Park Service, with most of the land under private ownership.

Managed by a trust board, the reserve contains 17,500 acres, 18 working farms, 400 historical structures, native prairies, two state parks, miles of Pacific shoreline, hiking trails, and Coupeville, the second oldest town in Washington state. They work together to keep the historic and natural resources protected for the enjoyment of those coming behind us.

While efforts have so far been futile in turning the old-growth forests and productive prairies into green cash for high-rise developments, another kind of green living is proliferating. It would be a travesty if these islands were without the Greenbank Farms, Meerkert Gardens, and others that are growing rhododendrons, lavender, blueberries, loganberries and raspberries.  Along with the flowers are the alpacas, goats and sheep.  Farms have their own character and offer wine, gifts, tastes and tours.

Distinctive Houses
Historic Coupeville, with nearly 2,000 residents, is known for its charming Victorian houses and the oldest working wharf in Puget Sound. The 450-foot pier was built in 1905 for the Mosquito Fleet to bring supply ships to Whidbey Island and transport local farm produce to its intended market.  It continues with a restaurant and shops. Pleasure craft have mooring space via floats that are attached to the wharf. 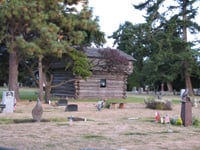 Tours are given at nearby Sunnyside Cemetery. This is the final resting place of island pioneers, Civil War veterans, descendents of Indian tribes, sea captains, and those who struggled across the Oregon Trail. The occasional ghost sighting is thought to be a grieving relative of Isaac Ebey. Tragically, a raiding northern tribe beheaded Isaac on his very doorstep.

Together with seven smaller islands Whidbey and Camano form Island County in the center of Puget Sound. While the Northwest has a reputation for a rainy climate, the islands lie at least partially in the southwestern Olympic Mountain rain shadow, allowing them a range of precipitation. The shoreline constantly changes with the ebb and flow of the tide, providing creature-filled marshes and a diverse and dense population of birds, plants and animals.

The islands have seasonal whale-watching, horseback riding and marinas offering fishing and boating. The week-long Whidbey Island Sailing Regatta is in July. Take a tour of area farms and wineries and you may be surprised by the wide variety of locally grown produce and products. Restaurants with world-class chefs are abundant, and simpler fare is available in unique taverns and seaside breweries.  In season, you might get your fill of clams and mussels. 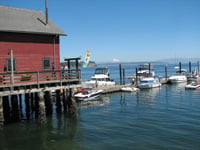 The islands offer visitors both constant action and the opportunity for rest and relaxation. Skimboarding, scuba diving, kayaking and canoeing are popular. The islands have ongoing studio tours for sculptors, glass blowers, painters, writers and performing artists. If you’re up for a little intrigue, try Langley’s Murder Mystery Weekend or step lively at Coupeville’s Summer Swing Dance.

The roster of year-round activities could keep anybody in a spin. Walking around any arts and crafts festival on a warm, sunny day is perfect for enjoying good friends with a great combination of artisan booths, entertainment and the inevitable food vendors. Consider doing something simple like kite flying or walking on a wharf to spy on starfish clinging to the pier poles down under.

Along with this multitude of recreational activities is the history. The County Historical Museum has a collection of woolly mammoth artifacts found in glacial deposits right there on Whidbey Island. The paved two-mile-plus biking-hiking Kettles Trail that connects Coupeville and Fort Ebey State Park skirts more Ice Age interests with geologic formations known as “kettles.”

Many visitor information centers are eager to provide you with guidance and maps to spice up your visit.  Both islands can be covered in a single day with a single tank of gas but what fun would that be.  Stay a while and become an Islander.

Sharlene Minshall’s e-book novel, Winter in the Wilderness, is available at most Internet book sites.

IF YOU GO:
Tourist information for Whidbey and Camano islands can be found at whidbeycamanoislands.com

For information about ferry service and to make reservations, call (888) 808-7977 or visit wsdot.wa.gov/ferries.

Vehicle admission to Washington state parks requires a Discover Pass, although that requirement is waived during your stay if you have paid a camping fee. For information, visit parks.wa.gov