You are here: Home / Top Stories / With Thanks to Kay Peterson, RV Industry Leader and Trailblazer
This post may contain affiliate links or mention our own products, please check out our disclosure policy here.

The RVing community has lost one of its most influential members. Kay Peterson, RV industry leader and co-founder of the Escapees RV Club, passed away after a long and joyful life filled with friendship and decades of adventures on the open road.

Kay Peterson: RV Industry Leader Who Made RVing the Best it Could Be 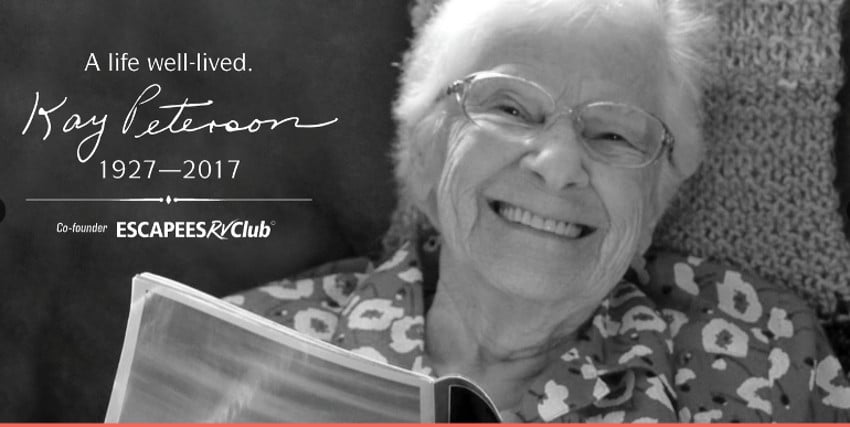 “While this news is deeply saddening, we must all remember that Kay lived one of the fullest lives any ninety-year-old could ever hope for. She accomplished every goal she set for herself, and her every dream has been realized.”

Few people have left such a legacy behind in the RVing world – and even fewer women in the industry. The Escapees RV Club that she co-founded with husband Joe back in 1978 is now the world’s largest support community for RVers of all ages. Each day thousands of RV travelers are well-served by club benefits and programs ranging from mail forwarding to RV park co-op ownership to the club’s innovative CARE facility. The non-profit CARE center (which stands for Continuing Assistance for Retired Escapees) opened in March of 1995 in Livingston Texas. Today it is the only place where full-time RVers whose travels are temporarily or permanently halted by medical or age-related issues can live in their RVs while receiving skilled daily assistance by staff and volunteers.

“Kay claims there was no ‘lofty vision’ involved when they started the Escapees Club,” writes RV Life author Sharlene Minshall in her Escapees tribute, “Quite a Journey.” Minshall says Kay humbly stated that “We were simply two working travelers enthralled with the RV lifestyle who wanted to make RVing the best it could possibly be for ourselves, our friends, and our fellow travelers.”

When Kay and her late husband Joe hit the road in an Airstream trailer with their two school-age children, their choice to go full-time RVing with kids was unheard of in most circles. With Joe working as a freelance electrician and Kay licensed nurse, the unconventional duo tolerated dire warnings from friends and family who feared the children would go astray with such a non-traditional lifestyle. But the Petersons followed their heart and kept rolling on to the next adventure. After encountering many other full-timers like themselves, Joe and Kay published a regular newsletter that evolved into the Escapees RV club. Long before the internet, the Petersons found an effective way to help friendships thrive among people with nomadic tendencies.

Leaving a Thriving Legacy for All RVers 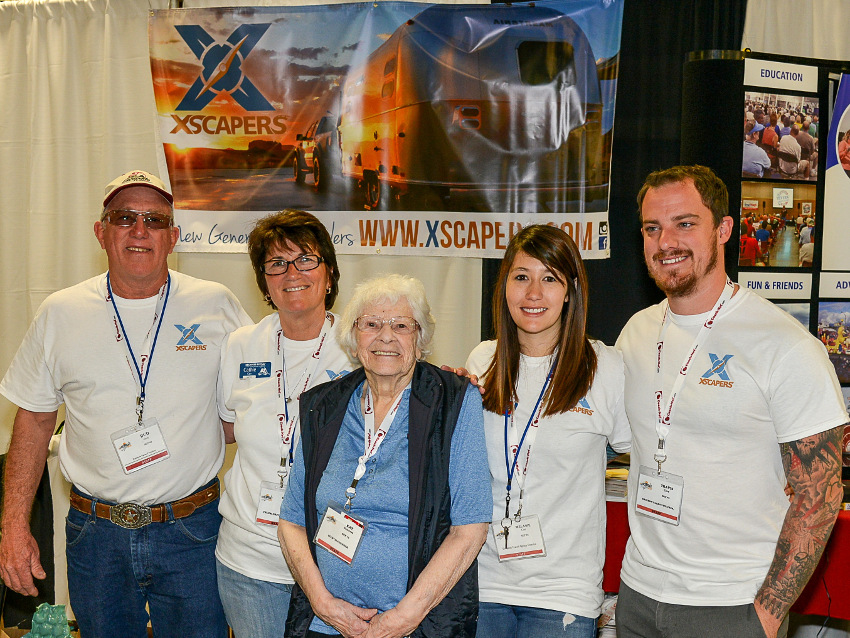 Kay and Joe exceeded their goals in endless ways that will continue helping other RVers far into the future. In 2001 their work in RV advocacy, support and community-building was recognized with an induction into the MH/RV Hall of Fame. Later in 2010 RV Business Magazine included them in their list of the 100 most influential people in the RV industry. The club’s leadership is now guided by the Petersons’ grandson Travis and wife Melanie. And just like Joe and Kay, this energetic team is guiding the club while full-timing with young children in tow.

Kay was 90 years old when she passed, but to anyone who had the pleasure of meeting her it seemed that she could go on living forever. Her bright smile and upbeat attitude served her well into her senior years long after she hung up the keys. She stepped away from daily Escapees operations many years ago, but continued reaching out to the RVing community in other ways, like sharing her passion for the written word. She was an accomplished author who inspired countless others to embark on their own travels, through books such as Chasing Rainbows “an anthology of short stories inspired by people she met while traveling, (which) is a favorite among RVers thanks to her wry sense of humor and candid way of writing,” notes the club announcement.

Escapees representatives say the family has asked for privacy at this time. Cards and other sentiments may be sent to the Carr family via Escapees headquarters at 100 Rainbow Drive, Livingston, TX 77351. Memorial service arrangements will be announced at a later date.