You are here: Home / RV News / Keystone Insane Concept RV Reveal and Updates
This post may contain affiliate links or mention our own products, please check out our disclosure policy here.

Did you miss the Flippin Nomad Keystone kickoff video? Watch it first, then return here and scroll for more progress. 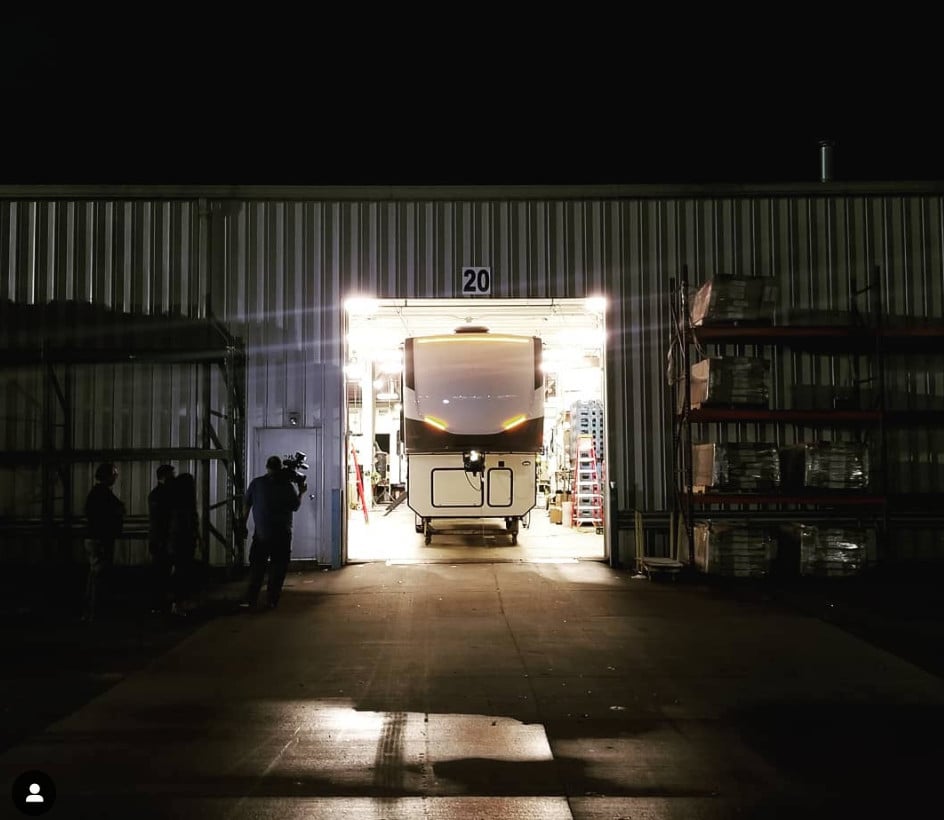 As full-time RVers, Cortni and her three-person team (one of which includes her mom) know what they want in RV interior living spaces. For this first of its kind industry project, the team is taking a hot-off-the-assembly-line Keystone Montana fifth wheel and gutting it. The goal is to transform the rig into a modern, stunningly beautiful RV interior. The team has been at it for four weeks.

Keystone left out some major components when manufacturing this dream fifth wheel. Flooring, furniture, window treatments and other interior design details were omitted to make it easier for the Flippin Nomad team’s renovations.

The new interior is being redesigned one small section at a time. The front bedroom area construction zone is underway, and the new design will gradually transition to the rear living room.

The real head turner is going to be the bathroom. “It will be the most insane and extreme RV bathroom you have ever seen!” says Cortni. The renovations are happening off-camera and include two wall treatments to turn the RV bathroom from ordinary into a luxury spa experience.

Most fifth wheel RV bedrooms are built with the same bed and wardrobe layout. But not the Flippin Nomad RV. Cortni’s team has removed the existing wardrobe and headboard in order to give the bed a north-south orientation.

A wardrobe is being constructed in the bedroom slide out. It even has space for a cozy cubbyhole dog bed.

“It is going to blow your mind when it’s all said and done,” says Cortni.

In this project phase, the Flippin Nomad interior designers wait for bedroom parts to arrive, while kicking off the RV kitchen redesign. Like any home build, a few construction glitches held up progress. But that didn’t stop Cortni from celebrating a major win, like installing the first of three modern fireplaces for the unit.

The RV fireplace Cortni picked uses a technology called “Ultrasonic water vapor.” According to the experts at ScienceDirect.com, the electric fireplace uses water to create hot looking but cool to the touch flames. No, it can’t be used for heat, but this RV fireplace is great for ambiance. It also won’t generate carbon monoxide and you don’t need to burn logs, making it totally safe for RV use.

The Keystone insane concept RV project has a long way to go, so watch this space for future developments.