You are here: Home / Top Stories / Las Vegas: Away from the Casinos
This post may contain affiliate links or mention our own products, please check out our disclosure policy here.

People come to Las Vegas to gamble and be entertained, and the thought of including a visit to a museum seems like trying to mix oil and water. With its exciting casinos and wild entertainment, Las Vegas offers plenty to see and do, particularly in the evening and early morning hours, and as the saying goes, “All it takes is money.” But only the most committed gamblers spend all their time in the casinos. Late mornings and afternoons provide an excellent opportunity to explore another side of Las Vegas through a visit to its interesting, varied and unique museums.

There was a time when crooks, racketeers and murderers were not only frequently seen in Las Vegas, but the “dirty money” they amassed by criminal means helped build the city’s opulent casinos.

Members of organized crime began investing money in Las Vegas in the 1940s, and to protect the tourist industry, they made Las Vegas a safe zone where contract killings were forbidden. Mobsters were raking in enormous profits from gaming and didn’t want to jeopardize the money flow.

A U.S. Senate Committee headed by Sen. Estes Kefauver held hearings across the nation in 1950-51 to expose organized crime, and those hearings and federal prosecutions led to a reduction in organized crime and a gradual loss of its influence on Las Vegas. One of those Senate hearing was held at a federal courthouse in downtown Las Vegas that has been converted to the Mob Museum. The museum, which opened in 2012, tells the story of the battle between law enforcement and organized crime and how it affected Las Vegas.

Like so much of Las Vegas, this museum is for the adult crowd—mainly because of the black and white photos that show the abrupt endings to the lives of mob members. Exhibits detail the life stories of notorious figures such as Al Capone, Whitey Bulger, Bugsy Siegel and Lucky Luciano.  Although many died violently, some of the worst criminals surprisingly died of natural causes at an old age.

There are interactive exhibits, including a room where visitors are invited to stand behind a one-way mirror and hold up a number, just like suspects in a lineup, and get a mug shot.

The museum was created at a cost of $42 million, and offers a lot to see and explore.

It may be hard to imagine that walking through a lot that has old signs scattered about, like a bone yard, could be an interesting side trip in Las Vegas. But every sign at the Neon Museum is part of the city’s colorful history. Most of the Vegas Strip is now lit with LED bulbs, but it was neon that glowed in the colossal signs that first dominated the skyline.

A guided, narrated tour through the lot reveals that each sign has a story to tell. In a town like Vegas some of the stories, well, should stay in Vegas. 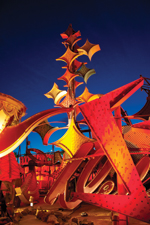 As you wander among the signs, you learn fun facts. Carpet was first installed in casinos to keep cowboys from riding their horses into the buildings. A casino owner whose sign is on display came up with the idea of placing chairs in front of slot machines so that gamblers would stay longer. He also was the first to offer free or discounted meals to draw customers into his casino. Yellow signs were used in the 1950s because yellow was associated with uranium, used to make nuclear weapons. The town was quite proud of the atomic bomb testing that created mushroom clouds that could be seen over the mountains to the east.

The museum is home to about 150 signs dating as far back as the 1930s. There are iconic signs that once beckoned visitors to the Moulin Rouge, Desert Inn, Flamingo and Stardust, along with signs for bygone restaurants, hotels and other businesses.

The museum’s visitors center is the picturesque La Concha Motel lobby that was built in 1961 next to the Riviera Hotel and was saved from demolition and moved to downtown Las Vegas in 2006. Tours are available year-round.  Most of the signs are not electrified, but custom-designed lighting has been installed to illuminate them for night tours.

Sure, you will see animals, birds, fish and dinosaurs. But this museum has an attraction that is unique to Las Vegas. The exhibit is called “Treasures of Egypt.” Visitors walk through an underground archeological excavation of King Tut’s tomb. Inside there is King Tut’s gold-covered casket and objects he needed in the hereafter. Of course this is Las Vegas and the entire display is a reproduction and has a Vegas Strip connection.

The pyramid-shaped Luxor casino and hotel opened in 1993 with an Egyptian theme. A sphinx welcomed visitors at the door, and inside was an elaborate venue that included King Tut’s tomb. Later, managers of the casino decided that the display was too much of a distraction, drawing patrons away from the slot machines, and the entire display ended up at the natural history museum.

If children or grandkids are along on the trip, a visit to this museum would be a highlight. The life-sized dinosaurs on exhibit are very impressive.

A group of Mormon missionaries were the first non-native settlers in the Las Vegas Valley who built a fort and farmed the area. Remnants of the fort can be found at this Nevada state park, which, like the mob, neon and natural history museums, is in the downtown area north of the Strip.

The missionaries built a primitive fort with adobe bricks using water from a spring. Wagon trains began passing through from Salt Lake City to California, taking pioneers and supplies. The Mormons had a hard go of it trying to grow enough food to sustain their stay, and Indians didn’t like the traffic passing through their territory. Contending with sporadic Indian attacks, marginal food supplies and housing, the Mormons abandoned the buildings. Some of the buildings have survived and there is a small but informative visitor center that fills in the rest of the story, as hardy immigrants started homesteading and ranching in the vicinity of the original fort.

There are many other museums in the Las Vegas area. One of the most notable is Springs Preserve, which offers interactive science and nature exhibits, botanical gardens, hiking trails, and live animal shows. It also is home to the Nevada State Museum.

Enter “Las Vegas Museums” on Google and you will get a long list of museums exploring everything from atomic testing to erotica. Obviously, people do go to museums in Las Vegas.

Mike Broadwater is a travel writer who lives in Coeur d’Alene, Idaho.