You are here: Home / Columns / On the Road for Good / Life as a Camp Host
This post may contain affiliate links or mention our own products, please check out our disclosure policy here.

“It sure beats just sitting at home just doing crossword and Sudoku puzzles,” he jokes.

On a warm sunny winter day, Dave and I sat down under a giant cottonwood at Big Bend’s Rio Grande Campground so I could learn more about what it’s like to be a volunteer for the park service. The natural-born cynic in me was prepared to hear stories about belligerent tourists, borderland crime and wild animal encounters, but the reality was quite the opposite. 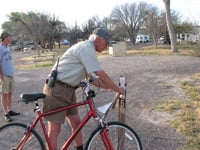 “I can honestly say I haven’t had a bad experience,” said Dave. “People come here to have a good time; they come here to relax. Sometimes they’re still keyed up, but they are winding down. People are amazingly cooperative.”

Dave’s love for the national parks dates back to family camping trips he took as a young child to remote places like Mesa Verde and the Grand Canyon. As an adult, Dave’s entrepreneurial lifestyle gave him a flexible schedule that enabled him to take long breaks between jobs. With ample time to himself during the best seasons of the year, he heeded the call of the National Park Service, and in 1997 began logging hours as a volunteer. He enjoyed the work so much that he continued to volunteer, working in different roles at some of America’s most majestic locations.

His first experience as a full-time volunteer was at Bryce Canyon in Utah. Later, he fell in love with the beauty of its neighboring landmark, Capitol Reef National Park. That’s when he decided to carve out a job for himself after noticing that the historic orchards surrounding the Fruita Campground were badly in need of maintenance. “I marched into the superintendent’s office and said ‘I want to work here!’” Impressed by his can-do attitude, park management presented him with a new volunteer position that required pruning trees and maintaining the lush orchards. “I spent three weeks pruning deadwood and eating my way across the orchards. I never grew tired of those peaches!” he fondly remembers.

Through the years at different jobs, including summers at Maine’s Acadia National Park, Dave learned that the greatest asset a volunteer can possess is a willingness to work within the fiscal constraints of the park service; it’s the key to happiness within the organization, he says. As the park system undergoes increasingly severe budget cuts, each location must do more with less, and workers must learn to go with the flow. For example, the antique pickup truck Dave has been assigned to use on his rounds isn’t the most reliable vehicle and often is hard to start. Instead of fighting with the old truck, this athletic camp host just hops on his bicycle.

What Makes a Good Camp Host? 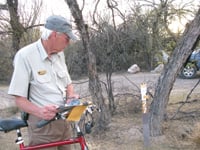 When it was time for his evening rounds, I followed Dave on foot as he patrolled the campground on his bicycle to look for newly occupied campsites. While reaching down to pull an expired camping tag from a post, he told me “You have to come with the attitude that you are here to support the park service, not to reform it. You have to fit yourself into the organization. It’s all right to offer suggestions, but anything that costs more than a dime, forget it. They’re always open to ideas, but just don’t try to reform things.”

When volunteers arrive at a park to begin their service, they receive a comprehensive orientation to the park and its surroundings. Dave says, “It’s an incredible amount of information delivered with the potency of a fire hose, in which you are introduced to virtually every key player in the park (including the border patrol) with virtually the same message: ‘You guys will probably meet more visitors than we do, do not hesitate to call in.’”

As the first point of contact with visitors, Dave is no stranger to frantic situations within the campground. “Often they come to me asking for help,” he says. “About three weeks ago, a woman stumbled out of her RV, hit the ground and broke her shoulder!” Dave had to manage the situation until rangers arrived to administer first aid while waiting for an ambulance to take the woman 120 miles to the nearest town.

The remoteness of Big Bend is one of its greatest attractions, yet one of the reasons why it’s not suitable for some volunteers. Dave says camp hosts must consider the location of a facility before applying for any job; remote parks aren’t good for anyone with health conditions that require regular medical care. You can still make a good volunteer, but you should seek out a park in a more developed area with better access to the level of care that you require.

At Big Bend, RVers must volunteer 32 hours a week in order to receive a free campsite at Rio Grande Village. Dave doesn’t mind, and says the schedule gives him enough time to explore Big Bend and work on projects like restoring his hand-built rowboat. He encourages anyone who is curious about upcoming volunteer positions to visit the NPS volunteer page at nps.gov/getinvolved/volunteer.htm.

At this point in Dave’s full-time RVing journey, serving as a long-time volunteer camp host for the National Park Service is a great point of pride. No matter where his travels take him, he has the experience and can-do attitude that appeals to management and enables him to wait out winter or cool off in summer at any of this country’s most magical landmarks.

Sounds good to me!

Rene Agredano has been a full-time RVer since 2007. As a working-age location independent entrepreneur she is always on the lookout for interesting jobs that will bring even more enjoyment to her nomadic lifestyle. Follow her full-timing journeys at www.LiveWorkDream.com