You are here: Home / Top Stories / Lithium-Ion Batteries Give You More Power In Your RV
This post may contain affiliate links or mention our own products, please check out our disclosure policy here.

Battle Born Batteries is proud to sponsor this article.

Lithium-ion batteries are nothing new in the consumer RV industry. Yet, hi-tech electronics, appliances, and the use of mobile devices in RVs are—and they all cry for portable power.

Although 12-volt lead acid batteries have been proven over the test of time, lithium-ion batteries are becoming more of a viable choice for RVers due to reliable tech and efficiency. 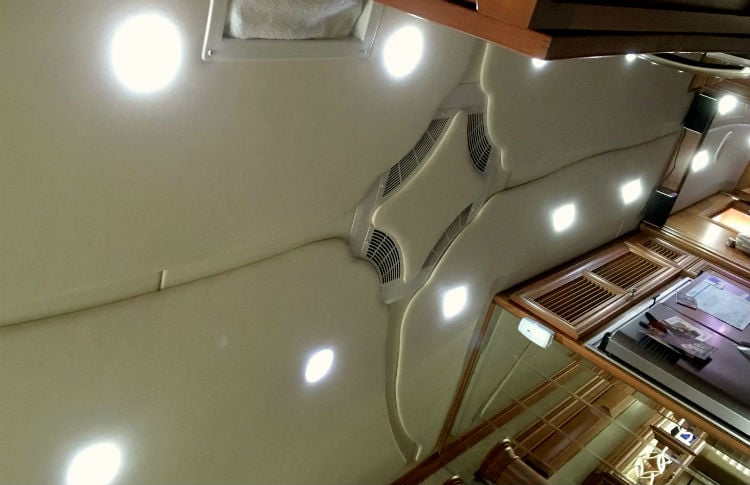 Lighting, appliances, and the array of electronics in an RV all call for dependable power. Be sure you have it. Photo by Trapperbob11 iRV2com member

“Right now, there’s a lot of demand to increase power capacities in RVs,” says Denis Phares, CEO of Battle Born Batteries, a Nevada-based manufacturer of the deep-cycle, 100-amp 12 Volt Lithium Iron Phosphate Lithium Battery (LifeP04). RVers are now looking at new options. And we believe that a lithium iron phosphate battery is the only game in town for this need.”

While the choices are vast in the lithium battery market, so are the power options and benefits. Deciding if a lithium battery is right for your needs all depends on the systems in an RV. Plus, there’s nothing worse than dry camping (or having limited electrical) only to worry about conserving battery power.

It’s easy to get baffled by batteries. But according to company COO, Sean Nichols, Battle Born Batteries’ LifeP04 battery has a group 27 design, allowing it to replace a lead acid battery in its dedicated space.

He explains that the battery discharges at 100 percent. This means RVers get double the capacity over a lead acid battery. Many RVers also build multiple battery banks to expand power capacity on board.

Benefits of the 12-volt lithium-ion batteries include:

“The lithium iron phosphate battery benefits the consumer by providing more power in the same amount of space than a lead acid battery,” says Nichols.“For example, a lead acid battery will discharge 50 percent of its energy before it significantly reduces the amount of cycles that it will produce. With a lithium iron phosphate battery, RVers can charge to 100 percent up to 3000 times and still have 75 to 80 percent of battery capacity left.” 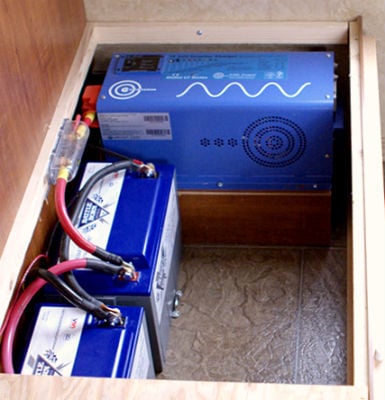 The Battle Born Batteries in an RV’s dedicated storage space.

Charging is simple and efficient

Recharging your batteries is all part of using portable power.  Unlike other rechargeable batteries, Phares says Lithium-ion batteries don’t have a memory effect.

As a result, RVers don’t have to deplete the battery completely to recharge it. Users can also recharge in the middle of a cycle.

Further, lithium or lead-acid battery chargers are applicable for lithium-ion batteries and RVers can gain a full charge in as little as an hour. Yet, for routine charges, a two-hour charge rate of 50-amps, or lower, (depending on the charger) is advised.

“We don’t recommend any specific charger as most work well (such as Progressive Dynamics Inc.),” says Phares. “But with a 50-amp charger, users are limited up to 50 amps. Or, with a 100-amp charger, they’re limited to charging up to 100 amps. It all depends on the battery bank and what current the charger can deliver.”

When it comes to reliability, both Nichols and Phares explain that the Battle Born tech goes through a stress-test by depleting the battery, then recharging it at a one-hour rate, repeatedly thousands of times. Additionally, the battery is designed assembled, and shipped from their manufacturing facility in Reno.

“We design and assemble all of our batteries in-house,” says Nichols. “We’re not just importing a battery for resale. This means we have extra steps in quality control. We get a lot of positive feedback on the quality because of this.”

“The 100-amp hour 12 Volt LifeP04 basically gets rid of the battery anxiety when RVing,” says Nichols. “When RVers are camping, they don’t want to run the generator in the middle of the night or check their batteries all the time. The whole idea behind RVing and camping is to relax and enjoy yourself.”

To look into lithium-ion battery options visit Battle Born Batteries to ensure the right battery pack choice for your rig.