You are here: Home / Top Stories / Living Under Glass
This post may contain affiliate links or mention our own products, please check out our disclosure policy here. 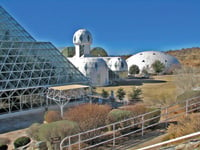 I started full-time RVing in 1986, and was without TV or other communication much of the time, so I was only vaguely aware of the news created in the late 1980s and early 1990s by Biosphere 2.  But this year a visiting Indiana friend accompanied me northeast from Tucson to the base of the Santa Catalina Mountains to see this unique project.

Biosphere 2 is a huge glass pyramid where a crew of “biospherians” lived for two years sealed off from the outside world. From the overlook, this 3.14-acre glass structure, roughly the size of two and a half football fields, seemed unreal. Posted on a sign was this excellent overview:

Biosphere 2 is one of the largest greenhouses in the world, and one of the most remarkable structures ever built.  It houses living organisms from five natural biomes comprising more than 1,000 species of plants and animals, research areas, and the former human habitat.  Beneath this structure, miles of pipes, tubes, and wiring, wastewater tanks, and other facilities make up a “technosphere” designed to recreate the Earth’s recycling functions.  The dome-shaped “lungs” beyond Biosphere 2 are connected to the main structure by tunnels.  They allow for air expansion due to changes in pressure inside the greenhouse.  The whole building is sealed off from the desert soil by a welded 500-ton, 1/8”-thick stainless steel liner.

A warning for anyone with walking problems: although they say the Biosphere 2 tour is a quarter mile with “some” stair climbing, that doesn’t cover it. Thinking it didn’t sound too bad, we took the comprehensive Guided Tour.  Being no longer 22 and with my friend Linda’s history of chemotherapy several times over, we found the tour strenuous. We did a great job of following, but were often the last ones to catch up. (The Self-Guided Tour is more limited but allows wheelchairs.)

Our excellent college-student guide, Josh, was not only knowledgeable and willing to answer questions, he looked at each of us as he talked, and made sure we could hear him even with machines functioning around us. While this might be a “duh” question for some, we all asked, “Where is Biosphere 1?”  Josh explained that Biosphere 1 is our planet Earth. 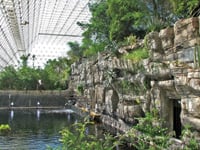 Crew Divided
Mission 1, made up of eight people from various backgrounds and parts of the world, lived within Biosphere 2 from September 26, 1991, to September 26, 1993.  Although most of them had known each other for years, worked together, and had become intimate friends, less than a year inside this “sealed terrarium,” they fell into two groups who were barely speaking. This crew, not able to agree on anything else, really wanted to see this operation carried to completion, and worked together to that end.

Josh took us through the airlock door where the steel tubing and frames and high-performance glass of this marvelous building were designed to be almost perfectly airtight. We went into a misty tropical jungle wilderness area that covered nearly half an acre, modeled after the Venezuelan rainforest. This section has a 60-foot high roof for growing huge trees and over 90 different species of plants.

We descended into a living ocean laboratory, which covers 850 square meters and includes a coral reef. The corals reproduced, and algae were hand-harvested by the crew to maintain ocean system health.  Marching on, we went through the mangrove wetlands, savannah grassland, and a fog desert, realizing all areas had changed drastically in the years since Mission 1. 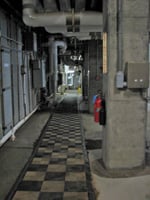 Surviving on a low-calorie, nutrient-rich diet, the Mission 1 crew grew a variety of crops, including bananas, papayas, sweet potatoes, beets, peanuts, lablab (poor man’s beans), cowpea beans, rice and wheat.  Biosphere 2 also housed pygmy and billy goats, chickens, pigs and fish. It was mind-boggling to walk through this huge glass compound and visualize the people living and working within it. The crew not only had to tend all areas and grow and harvest their food but also to raise, milk and butcher animals and prepare them for eating.

Difficult Diet
I suppose it isn’t any wonder that they lost an average of 16 percent of their pre-entry body weight in the first year and were nearly always hungry. It took time for them to adapt to their calorie-restricted diet. Their constant hunger may have fostered the low morale that fed the unhappiness within the group. During the next year, they grew more food, took in more calories and regained some of their weight. The good news was that this food lowered their cholesterol and blood pressure, but apparently their good will toward each other never resurfaced.

With one member of the crew being a medical doctor and with a medical team posted outside, their health was constantly monitored. Besides the hunger factor, eventually they realized the carbon dioxide level was fluctuating wildly and it took some clever detecting and work to get this deadly problem under control. As with any experiment, problems surfaced from almost every source but miraculously, between the crew inside and the expertise of those outside, they were able to work through them.

The basement-level technical infrastructure was where everything happened to supply heat and cooling via water circulation, solar energy and electrical power.  We walked into one of the two domes (lungs) where giant diaphragms expanded with daytime solar heat and contracted with the cool air at night. 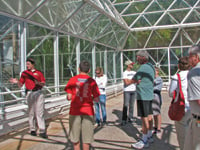 Construction of Biosphere 2 by Space Biosphere Ventures began in 1985 with funding from Texas oil magnate and philanthropist Edward Bass. The cost of construction and operation from 1985 to 2007 was estimated at $200 million. The original plan was to create a web of life systems, involving humans, farming and technology, all under one roof where interactions could be closely monitored.  It was thought that this experiment would provide answers to countless research questions, but the infighting among both the crew and those running it behind the scenes seemed to stir more doubts than foster answers. Early on, it was expected that this closed biosphere experiment would help with future space colonization.  Instead, Biosphere 2 has become a university research laboratory focused on the Earth and its problems.

Columbia University managed Biosphere 2 from 1995 to 2003, using it for scientific research and classroom study. In 1996, the airtight structure became a “flow-through” system, ending further closed-system research.

In 2007, the property and surrounding land were sold to a developer, resulting in fear that Biosphere 2 would be destroyed.  Instead, the University of Arizona leased the facility and then acquired ownership this year as a gift from the developer.  In addition, Edward Bass, who had been giving the University of Arizona $4 million a year for research and operations at Biosphere 2, pledged $20 million in additional support. University research project are focusing on problems such as climate change and water and energy sustainability.

If the Biosphere 2 project interests you, I recommend reading Dreaming the Biosphere by Rebecca Reider and The Human Experiment by a biospherian, Jane Poynter. I found both books as fascinating as I did Biosphere 2. You can find information about visiting Biosphere 2 at b2science.org.

As we came out of Biosphere 2 with its 6,500 glass panes, I heard one tourist remark, “I wouldn’t want to be their window washer!”