You are here: Home / Blog / Lostdom (Lost-dumb)
This post may contain affiliate links or mention our own products, please check out our disclosure policy here. 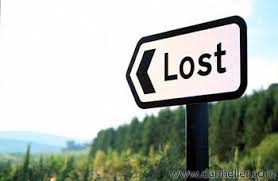 I arrived in Phoenix from the WA trip about 10 p.m. For the first time, I had tried one of the motel offers of free parking with an overnight stay on one end of my two-week trip. It worked out quite well. I hadn’t done this previously because I was usually staying many more weeks than they offered free parking. I chose to drive to the motel during the light of day. I didn’t know where it was and I have an aversion to finding anything at night in any city the size of Phoenix. All went well and on my return, the shuttle picked me up, took me back to the motel where I checked out, retrieved my car, took off, and promptly got lost (I haven’t told my kids that part yet!).

When after a few minutes I drove into a dark, narrow road that looked to be heading into a cow pasture, I surmised I was lost. I made a “U” turn without hitting any cows or snakes, stopped at a gas station for directions (fortunately, I am woman and I can do that!) and discovered I was only a block off I-10. I religiously followed I-10 toward Los Angeles until I turned north on Bypass #101 that took me to Wal-Mart for a gaggle of groceries and on home to North Ranch by midnight. I know you will believe this. As I unloaded the car and put everything up on the porch and dug through my purse, I realized I had no idea where my house key was (on a bright orange springy band so it couldn’t be lost).

I searched the suitcase where I had clipped my car keys and they were not anywhere in the bag. I said a prayer. Hmmm, I thought, I’ll bet they are in the backpack that I took into the hotel with my overnight clothes. I found a springy band with keys on it. Ah, immediate relief! When I reached the light, I realized they were keys I intended to give the new owners of my house. Back to the frustrated drawing board of my mind. I couldn’t even scream because it was midnight and I would have awakened my neighbors. Proving once again that prayer works but God has a sense of humor, I plowed through the stuff in that backpack again and, sure enough, another springy wrist band surfaced with the house key on it. This time it was on the bright orange springy band signifying success.

When I fly to Tracey’s in May, I’m putting the house key on the same clip as my car keys! (Hmmm, I wonder if I can still run fast enough to avoid being put in “the home?”) God Bless until next week.