You are here: Home / Blog / Lure of the Dungeness Spit
This post may contain affiliate links or mention our own products, please check out our disclosure policy here. 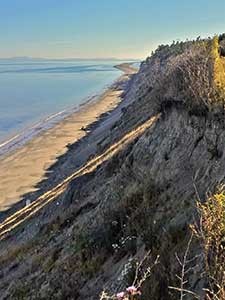 The Dungeness Spit can be seen from the top of a bluff. Photo Credit: Sharlene Minshall

The Olympic Peninsula in Washington provides endless sights and opportunities. Among them are the Dungeness Recreation Area, Dungeness National Wildlife Refuge, and the Dungeness Spit (and lighthouse). To reach them, from slightly west of Sequim on U. S. Highway 101, turn north on Kitchen-Dick Road and continue until you must turn right again. Almost immediately, turn left onto Voice of America Road and that leads you to the recreation area, where you can park during the day or camp. Let’s talk about camping first.

I walked the two primitive shaded camping loops where sites are long and wide enough for large RVs. Before bringing your RV, go to the Dungeness Recreation Area website at Clallam.net/parks/Dungeness.html. Click on any of 67 campsites on the map for pictures and extensive information to see precisely what you are reserving.

If you are a wildlife observer, a life-list bird-watcher, or just someone who loves a day or a week of nature, this is the place for you. However, since this is a refuge, there are stringent rules to follow. Go to the Internet or pick up the brochures on arrival. Knowledgeable volunteers are on hand to answer questions. The signage may vary, but the message is clear—don’t feed or disturb the wildlife. The main ingredient to seeing and experiencing all of this in its great wonder is the ability to be patiently quiet.

The U. S. Fish & Wildlife Service provides a remarkable “Watchable Wildlife” brochure that lists all the critters you might see and the habitat in which you might find them. They are marked as to the season one would likely see them, whether they are common, rare, occasional, or abundantly in residence.

No pets are allowed inside the refuge. An easy half-mile trail leads through Douglas fir, western hemlock and red cedar, Pacific madrone, and red alder, among others. We usually think of a forest as hushed, and you may not actually see the Douglas squirrel, but it is likely you would hear him chatter because you are disturbing his world. However, in mid-afternoon on this day, I shared this adventure with a family of five, with all three children screaming, pretty much at the top of their lungs, at each other, their parents, and anything that moved or didn’t move. If a squirrel had scolded them, it would have been in vain.

I know, they were kids and they were having fun. They went on down the trail, the peace of the forest broken by their screams, the whole point of the quiet refuge shattered. Did they see the huge nurse log that had fallen many moons ago and was decomposing underneath several big trees that were sustained by it? I doubt it. Did they see the Columbian black-tailed deer standing motionless in the thick undergrowth? No, well, I didn’t either, but that’s beside the point. They do live there.

Later, another family ambled along, the father softly explaining to his children about the sign that pictured various objects and how long it takes them to decompose, i.e. a million years for a glass bottle. I prefer teaching to screeching. 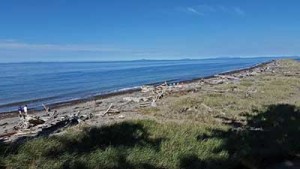 Two overlooks with telescopes are on the bluff above Dungeness Spit. The trail down to the water is steep but worth the view. The trail continues on to the spit and becomes an 11-mile round trip hike to the lighthouse. Be aware of the tide tables. The spit is as narrow as 50 feet in some areas and occasionally powerful waves break over it, carrying anything that is drifting in it. Maps show where areas are closed to the public for the safety of creatures who might be wintering, nesting, resting, mating or birthing on it.

There are no facilities until you reach the lighthouse. Once there, you can have a picnic, use the restrooms, or get a drink of cool, fresh artesian well water. Many years ago, I hiked half way to the lighthouse. This time I turned around and came right back up the hill, which had increased exponentially in steepness since I had walked down.

Orca whales rarely are a part of the scene but occasionally you might see them swimming off the Spit. A bit smaller, harbor seals are often seen bobbing in the water. Sometimes elephant seals, noted by their distinct large, elephantine noses, rest on the beach as they go through their yearly process of replacing skin and hair.

The Dungeness Spit is the longest natural sand spit in the U.S. and among only a few in the whole world. It took roughly twenty thousand years and the help of the wind, rain, waves, and miles and miles of sand and gravel from the Strait of San Juan de Fuca bluffs blowing into the currents to grow the Dungeness Spit. It continues growing, each year adding 14 feet of sand to the already 15 miles of beach.

To someone raised near freshwater Lake Michigan, references to eelgrass beds, sheltered nooks, and salt marshes are fascinating. While we humans stop at Sequim’s #101 Diner for dinner and atmosphere, the ducks and shorebirds who frequent the spit’s mudflats and lagoons think that the mollusks and marine worms that roll in on the tides are mighty tasty. Their music is the sound of the sea.

The job of the refuge is to protect these areas required by native birds, migrating shorebirds, wintering waterfowl, and the abundant eelgrass nursery world that nurtures a variety of fish.

As we all know from our history books, Captain George Vancouver named everything within his sight and he named the New Dungeness Lighthouse after a lighthouse on Dungeness Point along the rugged coast of England.

Finished in 1857, the lighthouse was the first of many but is now one of the few and the only one open to visitors. In 1904, a two-story house was completed and in 1927, due to deterioration, the tower itself was reduced in height from 100 feet to 63 feet. In 1915, President Woodrow Wilson decreed the Spit as a wild bird reservation. Eventually, it morphed into The Dungeness National Wildlife Refuge, managed by the U.S. Fish & Wildlife Service. By 1993, the last of the keepers were gone.

To the rescue in 1994 came the New Dungeness Chapter of the U.S. Lighthouse Society, which signed a renewable lease with the Coast Guard, and the lighthouse became operational once more. Volunteers are now scheduled to “Stay for a week and build memories for a lifetime,” cleaning, repairing, and conducting tours of the lighthouse and museum.

Remember, “Take only memories, leaving nothing but footprints,” and I would add, be choosy about where you leave the footprints. God Bless.

“Winter in the Wilderness,” Minshall’s first novel (e-book & hard cover), and the fourth edition of “RVing Alaska and Canada” are available through Amazon.com.

The daily entrance fee to the wildlife refuge is $3, but various passes are available. The refuge website is at fws.gov/refuge/dungeness.

Refuge maps and tide tables are available online or at the refuge. Do not use the refuge mailing address for electronic navigation instructions. It will not take you to where you want to be. For specifics on boating access to the lighthouse, contact the refuge office at (360) 457-8451.

At the refuge, don’t disturb the wildlife. Leave young creatures alone because if you are watching them, chances are a parent is anxiously watching you even closer.

The U.S. Fish & Wildlife Service is always looking for volunteers to help with surveys, invasive species mitigation, public education, and marine debris cleanup. Age is not a limiting factor and training is given.