You are here: Home / Top Stories / Magical Mesa Verde
This post may contain affiliate links or mention our own products, please check out our disclosure policy here.

Magical Mesa VerdeMesa Verde National Park in Colorado is a place that causes one to think of the past. During my visit, I couldn’t help wondering about life long before cellphones and iPods—when people traveled on trails to visit each other and then chatted while they ground corn and carved images into rock. And as I walked along the trails at Mesa Verde, I thought of the plants that were growing here and how the Ancestral Puebloans had used these same kinds of plants for various medicinal purposes.

It was an awesome time to visit and explore Mesa Verde because the wildflowers were in bloom.
Mesa Verde is the largest archeological preserve in the United States, with nearly 5,000 known sites dating from A.D. 550 to 1300. The sites include pueblos, pithouses, farming structures, masonry towers and 600 cliff dwellings. 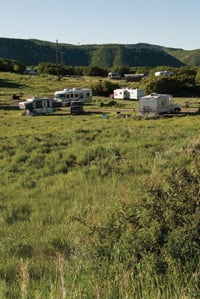 I recommend spending at least a day or two in the park; but if all you have is a few hours, it’s better to see a portion of the park than to not see any of it at all.

Mesa Verde (Spanish for “green table”) was the first—and still only—national park of its kind, devoted entirely to the protection of man-made artifacts. The 52,000-acre site lies on the Colorado Plateau at elevations ranging from 6,900 feet to 8,572 feet.

The Ancestral Puebloan people are believed to have lived here for more than 700 years. The earliest inhabitants built and lived in subterranean pit houses on the mesa tops. By 1000, however, the Ancestral Puebloans had progressed from pole-and-adobe construction to skillful stone masonry.  From 1100 through 1300 they advanced even further, to the building of intricate cliff dwellings.  (Most of the dwellings were built between 1200 and 1300.)

Then, the Ancestral Puebloans moved away, leaving everything—their homes, their kivas (ceremonial rooms), their reservoirs, everything. Their reasons for leaving remain a mystery, but some researchers blame drought and over-farming the land. Others argue that internal conflicts and a series of natural events ended the civilization.  Currently, researchers believe the Ancestral Puebloans didn’t disappear, they just began migrating south into what we now call Arizona and New Mexico.

Today, visitors marvel at the dwellings they left behind. Cliff Palace, the largest and most famous dwelling, is a four-story apartment-like complex with 150 rooms, with roofs of the lower buildings forming porches for the dwellings above.  A quarter-mile trail leads to the amazing structure and 23 kivas, built beneath the rim of a cliff formed of Cliff House Sandstone. The population here probably numbered around 100.

You have to be a little adventurous to visit the Balcony House, for it is accessible via a 32-foot ladder, plus visitors have to crawl on their hands and knees through a short tunnel. Although I didn’t see any guests shy away from the short tunnel, many were obviously leery of climbing the ladder.  But everyone did it and everyone survived!  Billed as the most adventurous cliff dwelling tour in the park, Balcony House is one of my favorite tours because it illustrates how room and passageway construction evolved through time.

Long House is worth visiting just to be able to see the second largest dwelling in the park.  It was excavated between 1959 and 1961 as part of the Wetherill Mesa Archeological Project.

The 12-mile drive out to Wetherill Mesa is long, winding and very beautiful. Vehicle length is restricted to 25 feet or less. Open only in summer, the road has turnouts and overlooks with kiosks that relate information. At the end of the road you’ll find restrooms, a snack bar, an orientation area, a tram-loading area and a shaded area with a ranger to answer questions. You can walk to Step House from this point. It’s a self-guided tour and offers evidence of two occupations taking place in one location.  There’s evidence of a modified basket maker site dating to 626, with the remainder and bulk of the alcove containing a masonry pueblo dating to 1226.

To visit Cliff Palace, Balcony House and Long House you will need to purchase tickets prior to your tour. Tickets are reasonably priced at  $3 per person for each tour. Although the park is always open, tour times and availability are determined by the season. In the winter, the main houses are closed to tours. Spruce Tree House is open year-round.

Nearly all Mesa Verde visitors see Spruce Tree House, located near the Chapin Mesa Archeological Museum.  It’s the third largest and best-preserved dwelling in the park. It was constructed between 1206 and 1280 and discovered in 1888 by two ranchers, Charles and Richard Wetherill, who were searching for their stray cattle.  The dwelling contains about 130 rooms and eight kivas, and was built into a natural alcove 216 feet wide and 89 feet deep.

Visit the cliff dwellings and you’ll no doubt begin wondering about the size of the people who lived here. The doorways were not made for those of stature.  An average man was about 5 feet, 4 inches to 5 feet, 5 inches tall, while an average woman was about 4 inches shorter.  They were the same size as Europeans of the same time period.  The Ancestral Puebloans didn’t live long lives.  The average life span was 32 to 34 years, however there were some who lived into their 50s and 60s. About half of the children died before they were 5 years old.

Like the Ancestral Puebloans, today’s visitors can camp in the park—only with a few more amenities.  Morefield Campground offers campsites amid native Gambel oaks.  In the spring, you’ll find wildflowers and in the wooded canyons you may find deer and wild turkeys.  Several nice trails begin near the campground and offer good views.

Upon arriving at the park you can drive on your own or you can leave the driving to someone else. Aramark, the park’s concessionaire, offers a choice of two bus tours. The tour season will end this year on Oct. 20. For information, see visitmesaverde.com.

The Chapin Mesa Archeological Museum, open year-round, is 21 miles from the park entrance.  It’s a wonderful place to learn more about Mesa Verde and the Ancestral Puebloans. The road is paved, but it’s also narrow and has sharp curves and steep grades. The views from the roadway are extraordinary—you’ll see into four states.  Please note, trailers or towed vehicles are not allowed to proceed beyond the Morefield Campground.  If you are not camping at the park, you may park your vehicle in the large parking lot located near the entrance station.  For more information call (970) 529-4465 or visit nps.gov/meve.

The entrance to Mesa Verde National Park lies between Cortez and Mancos on U.S. Highway 160 in Colorado. While the park is open year-round, the Cliff Palace, Balcony House, Long House, Step House and other facilities are closed during the winter.

The Far View Visitor Center is 15 miles from the park entrance. It will close on Oct. 21. The Long House on Wetherill Mesa will close for the season on Sept. 4, the Balcony House on Oct. 21, and the Cliff Palace on Nov. 11. The Chapin Mesa Archaeological Museum and the Spruce Tree House are open year-round.

Construction is under way on a new visitor and research center at the park entrance. It is due to open this fall and will replace the Far View Visitor Center. It will also serve as a research and storage facility for the park’s archives and the museum’s collection of more than 3 million objects.

Visitor guides containing information on ranger programs, tours and hours of operation can be found at nps.gov/meve.

Morefield Campground has hundreds of dry tent/RV sites and 15 full hookup RV sties, along with 17 group campsites.  It will close for the winter on Oct. 14. For information, see visitmesaverde.com.