You are here: Home / Top Stories / Meeting Rosie the Riveter
This post may contain affiliate links or mention our own products, please check out our disclosure policy here. 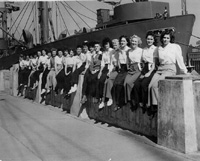 The National Park Service recognized not just the veterans of World War II, but also those who helped win the war at home, with the opening of the Rosie the Riveter WWII Home Front National Historical Park two years ago in Richmond, California.

The park has three points of interest: the Rosie the Riveter Visitor Education Center, where new permanent exhibits were recently installed; the Rosie the Riveter Memorial, which has a walkway with a timeline charting events on the home front during the war, and the Red Oak Victory Ship, which is open for tours.

When Pearl Harbor was bombed, Richmond was a town of 23,000. There was a Kaiser Pullman car refurbishing plant, and Ford had a factory turning out cars. In months, Kaiser had four shipyards working, the Ford factory was turning out tanks and Jeeps, and the population suddenly blew up to 130,000.

Shipyard workers, including all the Rosies Kaiser had lured to Richmond with a promise of $1 an hour and a free train ticket, turned out an astonishing number of ships in very little time. It is also where the Rosies built the Robert Peary Liberty ship in the fastest time on record—a little over four days.

Chat with the Rosies 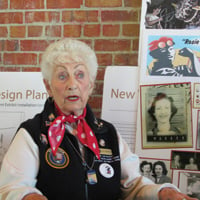 The place to start a tour of the historical park is the visitor education center in what is now the Historic Ford Building Complex, next to the old Kaiser Shipyard #2.

The building that serves as the education center has been lovingly restored, and includes a small theater where documentaries on the amazing home front “battle” are shown. Best of all, on Fridays, there is a chance to meet some of the original Rosies. Women who worked during the war effort chat with visitors informally, telling their remarkable stories and showing pictures.

Marian Wynn, in her 80s, is one of the Rosies. Her family, which included 10 kids, was struggling in Minnesota, where her father earned $69 a month at a WPA job. He and one of his sons accepted the free train ride to Richmond to work in the war plants, but he insisted Marian graduate from high school before joining them. She was 18, fresh diploma in hand, when she boarded the train for Richmond a few months later.

She and other family members got jobs on different shifts so they could share the same bed by sleeping at different times. There was a critical shortage of housing in Richmond with the sudden influx of people from all over the country. People lived in cars, the back of trucks, tents, wherever.

Marian became a pipe welder, joining the boilermakers union. While she was working in the yards, one of her brothers was killed in Normandy.

The male welders at first refused to work with women or with the African-American men and women pouring in from the South. But management told the men to suck it up, and the new workers were quick learners, even though they had to contend with prejudice and insults.

As time went on, respect was gained. People swore they could tell a woman’s welding from a man’s because it was neater and cleaner. Years of needlework had prepared the women for making good seams even if it was in steel. The war effort challenged stereotypes of women and blacks. The new workers joined the unions and took great pride in their work.

The shipyards turned out a startling number of ships—742 in those few years. They used assembly line techniques and prefabricated various parts that they then assembled with “Whirley Cranes.” The saying in the yards was “10 down the ways in 31 days.” Each time a ship was ready to sail, the workers at the yard paused to cheer as a champagne bottle was smashed on the hull, and the ship slid out ready to join the war. 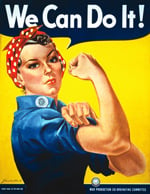 The Red Oak Victory Ship, recently out of dry dock and lovingly looked after by a corps of volunteers, is in the harbor five miles from the park’s visitor center. It is an impressive ship that took an astonishing two weeks to build by the Rosies. It has 5,000 rivets, and 41 miles of welding holding it together—nice, neat, strong, women’s welding. On the docks is a rusting Whirley Crane—the last one left.

The ladies worked well, worked fast and worked hard. Kaiser provided child-care centers for them and also gave them health insurance. But at the end of the war, women and minorities found themselves abruptly unemployed.

“My dad earned enough he went back to Minnesota and bought 80 acres and built a house,” said Marian Wynn. “He took a piece of my welding with him to show off to his men friends so he could prove I was better at it than they were.”
She had married by then, and so stayed behind and went to work in a cannery.

Turned Away
Catherine Morrison, another Rosie who volunteers at the center, was not so lucky. She was laid off as a welder, and sought new work through the unemployment office, but found nothing for six weeks. Finally, the woman who ran the office told her she had a job and handed her a paper. Morrison read the paper in disbelief. 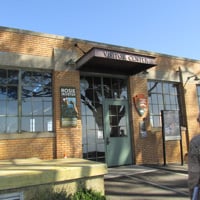 “Is this a joke? This is a job as a waitress. I don’t know how to do that. I am a journeyman welder,” she said.
The woman told her, “ Oh, those jobs are for the men.”

“I was so hurt that another woman would say that to me, but the men had been promised their jobs back, and that was fair. So I went back to obscurity,” Morrison said.

The Rosies are rising from obscurity now. They are rightly proud of their accomplishments. They consider everyone who contributed to the war effort to be Rosies.

“The baby sitters at the child-care centers are Rosies. Without them we couldn’t have worked,” said Morrison. “President Obama’s grandmother was a Rosie. Marilyn Monroe was a Rosie when she was 18 years old.”

Many people think of Richmond as a gritty town because the interstate highway skirts the refineries and goes through a part of town that is only now enjoying a renaissance. But the southern end of Richmond and the “old town” of Point Richmond are picturesque with tree-lined streets, period buildings and a spectacular location on San Francisco Bay. The Miller Knox Regional Waterfront has rolling green grass and trees right up to the water, a swimming beach and a pier. There are kayaks to rent, and a catamaran sailboat that takes people for sails on the placid bay, past the old dry docks of the shipyards and other historical sights.

There’s a lot to do in Point Richmond, but the one memory that will linger longest is a woman in a hard hat building a ship.

Andrea Granahan is a writer who lives in Bodega, California

IF YOU GO:
Rosie the Riveter Visitor Education Center is in the Historic Ford Building Complex at 1414 Harbour Way South on the Richmond waterfront. The center is open from 10 a.m. to 5 p.m. daily except Thanksgiving, Christmas and New Year’s Day. Phone (510) 232-5050, or visit nps.gov/rori/index.htm

The Rosie the Riveter Memorial is an outdoor area with a walkway, sculptures, gardens and panels that include quotes from workers, photos and memorabilia. It is a mile from the visitor center.

The Red Oak Victory Ship is open from 10 a.m. to 3 p.m. Tuesdays, Thursdays, Saturdays and Sundays, but the hours depend on the weather and the availability of volunteers. Phone (510) 237-2933 before visiting.