You are here: Home / Great RVing Destinations / Three Midwest Campgrounds Near Great Biking and Walking Trails
This post may contain affiliate links or mention our own products, please check out our disclosure policy here.

Never go cross-country RVing without your bicycle. Take time to pedal or walk the middle of the US, where Midwest campgrounds near great biking and walking trails make excellent stop-overs. Pedal into rolling hills, wind along river trails or tour expansive farmland for a day or a week. The middle of the USA has more to offer than many people think. 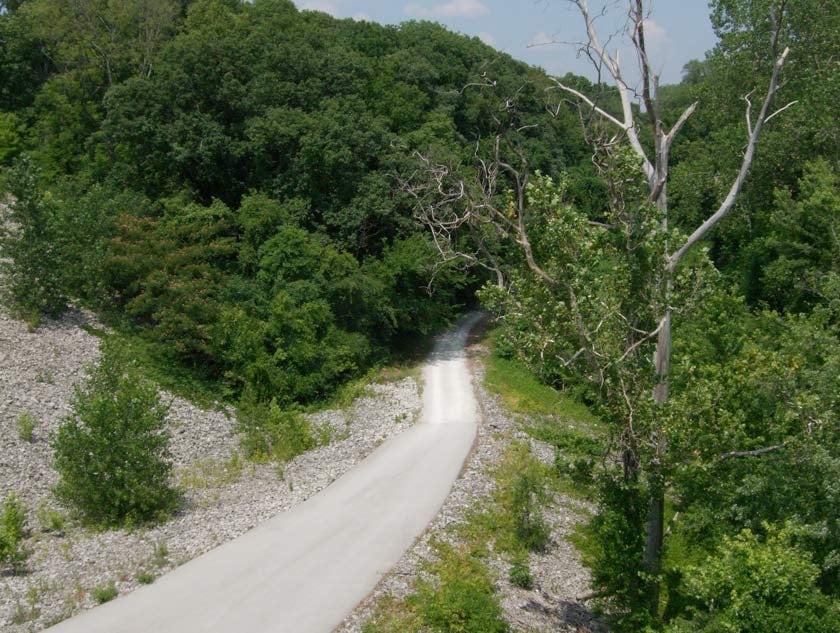 The Midwest is ground zero for many of the country’s most beloved Rails-to-Trails projects. You’re almost always close to one when driving across country. During summer consider charting a meandering course through Nebraska, Missouri and Minnesota. These states have three of the best.

As mentioned in this short list of great western campgrounds near biking and walking trails, traillink.com is a great website to begin your Midwest RV trip planning. It’s managed by the Rails-to-Trails Conservancy, a nonprofit overseeing a nationwide network of trails. Their site can help you plan short and long trips to these Midwest campgrounds near great biking and walking trails.

If golfing in Northern Minnesota isn’t your thing, but walking, running or bicycling is, get on the Paul Bunyan State Trail. It runs for an astonishing 119 miles north to south, making it one of the longest paved trails in the U.S.

Explore the former Burlington Northern Railroad line for a scenic ride through Minnesota’s best wilderness. From the boreal forests, to meadows, wetlands, lakes and rivers teeming with wildlife, the Lakes Region’s rich terrain and wilderness will call you back again and again.

Start your adventure at the north trailhead in Bemidji or in the south at the town of Baxter. Both are great, friendly towns with plenty of RV camping near the Paul Bunyan State Trail.

At the Northern Trailhead of the Paul Bunyan State Trail, you can RV camp at Lake Bemidji State Park, Be warned though, it’s a popular destination, so reservations are a must. Read campground reviews carefully, since the heavily-treed campground may be problematic for some large rigs.

If you start at the southern trailhead in Brainerd, the rustic Crow Wing State Park  has dry camping and some electric hookups for RVs. 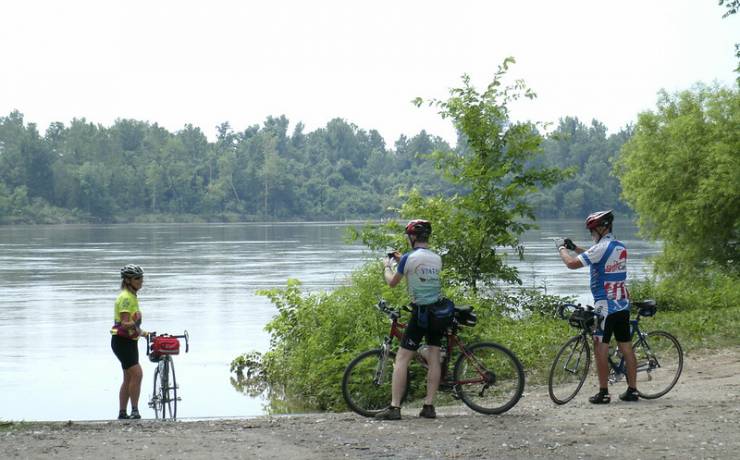 The Katy Trail is the Mother of Rails to Trails projects in the USA. At 240-miles long, it’s the longest continuous trail. Traversing from the Saint Louis suburbs to the western Missouri town of Clinton, this state park nearly covers the entire width of the Show Me state.

The Katy’s scenery is so epic that bicyclists worldwide plan entire vacations around it. Rolling farmland, historic towns and the mighty Missouri River are just some reasons that make it a beloved bicycling, walking and running trail.

Finding RV campgrounds near the Katy Trail won’t be your biggest obstacle, but spring runoff will. Many segments of the Katy go through floodplains. Ride or walk the Katy during late summer.

Sedalia marks the western terminus of the Katy. Many trail fans say it’s not the most scenic way to begin your adventure, but Sedalia is far from the Missouri River, making it a safe bet if the eastern end of the Katy Trail was damaged by seasonal flooding. This historic town has lots to do, and the city’s Missouri State Fairgrounds have cheap RV camping with basic accommodations. 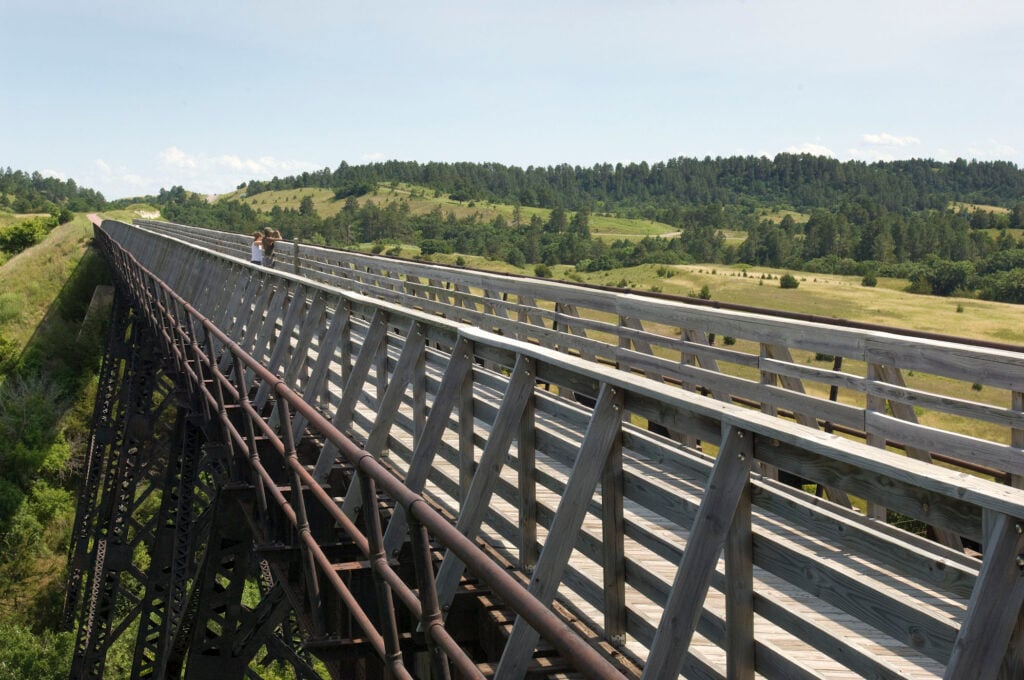 Coming up on the heels of the Katy Trail is Nebraska’s Cowboy Recreation Trail. Currently spanning about 200 miles between the towns of Valentine and Norfolk, eventually the north central Nebraska rail trail will knock the Katy from first place as the longest continuous trail in the United States.

Currently you can walk, bicycle or even horseback ride through high prairie lands, old West homesteads and river eco-systems rich with wildlife like bald eagles. Some spots are paved, the rest is crushed gravel. Tackle it on a rugged bike with appropriate footwear.

The western terminus of the Cowboy Trail makes a great base camp. It’s in the town of Valentine near the Niobrara River. This National Scenic River is a launching point for adventure paddle sports and unforgettable bird and butterfly watching. A few RV parks in Valentine make good base camps, as well as Smith Falls State Park. This popular park is home to Nebraska’s highest waterfall and popular take-out spot for the Niobrara River.

Don’t let the many stereotypes about flat, boring Midwest scenery keep you from exploring it more in-depth. These three Midwest campgrounds near great biking and walking trails barely scratch the surface of middle state adventures, whether you’re RVing coast-to-coast or planning to stay a while.