You are here: Home / Uncategorized / Mobile RV Medic's – Dale Sumner
This post may contain affiliate links or mention our own products, please check out our disclosure policy here.

At the 10th Anniversary Reunion Rally in Myrtle Beach a number of seminars were held on the 1st day of the rally. One of the seminars that I wanted to attend was the RV Electric Seminar given by Dale Sumner from Mobile RV Medic. Dale travels the show circuit and he presents an RV electrical seminar that he parallels to something more comfortable to most folks, water.

Water can be equivocated to electricity in most discussions. Water pressure for instance can be compared to volts. The diameter of a pipe under pressure can be paralleled to amperage. A pipe can be seen as a wire and a spigot can be seen as a circuit breaker. Throughout the 1st half of the seminar getting folks comfortable with electrical terms using water helped them feel comfortable with the basic electrical terms that we would be talking about in the 2nd half of the seminar.

Electricity as we have seen originates from a source. The source is required to provide a minimum amount of what is called volts in the wire so that it can efficiently perform the work that is required to power all the appliances in the RV. In the past voltages were understood to be 110volts however more recently 120 volts has become the benchmark that RV owners need to see applied to their RV electrical systems. The need for 120 volts becomes extremely important when a load is applied to the circuit when turning on a water heater, air conditioner or micro wave oven.

RV electrical loads are all rated using a term called watts. For example an appliance that is rated for 1850 Watts like a hair drier will pull 15.4 amps. On a 20A circuit this isn’t going to be a big problem since the wires would be capable of handling the amperage flowing through the wire. Take the same hair drier and go to an older campground that may not have the best electrical system and perhaps you might only be able to get 108 volts, now to run the same appliance you will draw 17 amps. Now make this draw cumulative over a number of normal appliances and you can see that before too long you could overload the electrical cords that connect from the pedestal to the RV especially those RVs with 30 Amp capabilities. 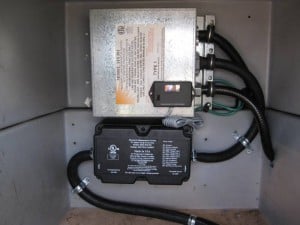 In these cases we spoke about using an Intellitech Power Monitoring System which begins to shed loads in order to protect your electrical system and allows you to use some appliances rather than trip circuit breakers. On 50A amp cords we discussed that both legs add and offer the RV owner a total of 100 amperes. Although there is more power and less to be concerned about there are a number of conditions that can affect this system as well. Surge is one of the demons that can negatively impact an RV electrical system although it may only occur less than 5% of the time it can be devastating.

As RVers we need to be concerned about a number of issues and the 1st thing that we have to deal with is whether or not the line voltage is too low or too high. These conditions can cause an excessive amperage draw which manifests as heat and the other can simply destroy equipment not designed to operate at 15% over its nominal rating of ~115volts.

Managing air conditioning time delay was an issue we discussed because if the piston in the compressor is at the top of its cycle it can draw a great amount of amps which could trip a circuit breaker and or damage equipment. A delay circuit to compensate for this of 136 seconds allows the compressor to relax to the point where the piston returns to a neutral position. Air conditioners may have this delay feature built in however if it doesn’t an external power management system can deal with this issue in the event of a power interruption.

Unlike houses, issues that are not uncommon in RV electrical supplies could present reverse polarity, an open neutral, an open ground, incorrect AC frequency and 240 volts being applied to the wrong terminals. We discussed defective electrical equipment which is typical in older campgrounds such as mis wiring, bad circuit breakers and worn electrical outlets. Each of these issues can happen and occasionally more than one of these situations can occur concurrently. Being able to manage these and other electrical issues becomes important to the average RV owner if safety and preservation of the RV electrical circuits and equipment is desired.

Dale Sumner’s seminar was very well received and concluded with a round of applause. As folks were breaking up and exiting the room the questions kept coming in. Dale answered every question and was eventually able to make it back to his display area. 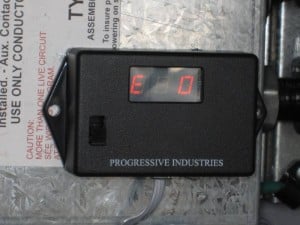 This is the Remote Display for the EMS unit. The cable is a data cable and not a phone cable and it can be mounted anywhere. The switch on the left of the unit is to by-pass the EMS unit however it is not recommended. In order to bypass the EMS, the switch is toggled up and the LEDs will display “OFF.” The display is currently displaying E0 or “NO” errors.

A little bit about Dale. Dale is a Master Certified RV Technician who operates the Mobile RV Medic. Dale has authored a book called Basic RV Electricity and Protection and is currently on sale for $5.00. Dale is a certified Progressive Industries Dealer. At the Rally a number of us chose to become owners of a new Electrical Management System that Dale offers for sale. I chose the model EMS-HW50C (50A hard wired) and having this system gives me a high degree of confidence that I am now in control of my electrical system. I can identify voltages across Line1 and Line 2 whether hi or low. I can see immediately what the current draws are for each leg of the electrical service. A 2 second notice flashes across reporting the frequency of the current being provided and should there be any errors that present to the system they would show up as “E” code from 0 to 10. The system will finally indicate if there was a previous error “PE” from 1 to 10 as well until the power is disconnected.

The Progressive EMS system protects the RV from all known threats when plugged into a RV power pedestal. The EMS-HW50C features a parallel surge monitoring system and is microprocessor controlled. In the event of a surge, a small user replaceable card featuring metal oxide capacitors traps the surge and sacrifices itself and saves the EMS unit and RV from damage. Once a surge has been realized an E10 code will be displayed on the remote monitor and the unit will continue to provide EMS services. The surge properties of the unit would be fully restored when the surge card is replaced.

I am told that in the event of a problem with this unit that a live person can be reached and any issue can be resolved by Progressive technicians. See the phone number in the on-line PDF manual.

Once we arrived home and I plugged into my pedestal, I can see that I have 122 volts and that I am only drawing 3 amps on the L2 side. I expect that this draw is being generated by the on-board battery charging circuits. I can only say that I am very pleased with this new equipment over my previous equipment that only featured 5 LEDs and no additional information. I am confident if a surge event occurs that I can fix this unit myself rather than sending the entire unit to the manufacturer.

I would like to compliment Dale who installed this system. It was very professionally mounted and installed and it is one of the cleanest installations that I have seen. The RV electrical cord is directly connected to the EMS-HW50C and the output then goes to the automatic transfer switch via a 6/4 SJ cord.

Dale Sumner has signed up to attend the 2011 iRV2 National Rally and you will be able to attend his seminar at that time which is not to be missed. 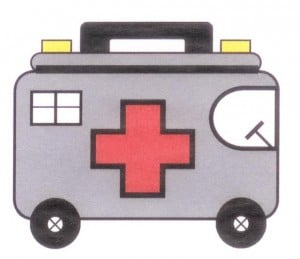