You are here: Home / Top Stories / National Weather Service: Be Prepared for El Niño
This post may contain affiliate links or mention our own products, please check out our disclosure policy here. 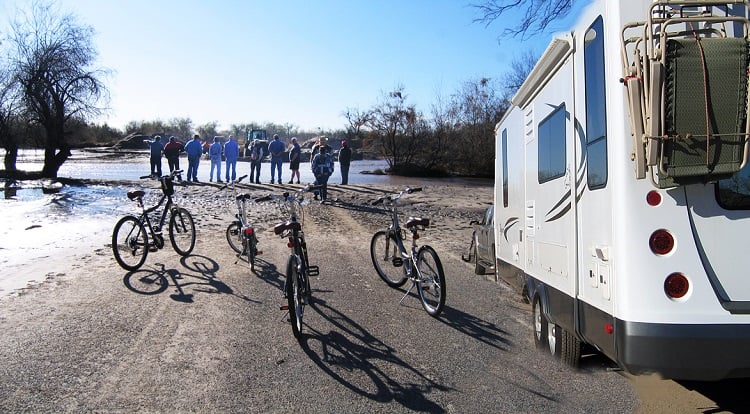 El Niño is coming. It’s practically a certainty, according to the National Weather Service (NWS), but is it something that RV travelers should care about?

The answer to that, according to NWS forecast maps and predictions, is it all depends on where you are in North America. If you’re in its most impacted path, you will be affected. Speaking to an overflow audience at the public library in the mountain community of Idyllwild, CA, Warning Coordinator Meteorologist Alex Tardy presented a solid case for what’s currently ahead for the turn of the new year and early spring of 2016.

According to the data interpreted by NASA and the National Oceanic and Atmospheric Agency (NOAA), those who will be most affected are travelers in Southern California and Arizona.

“The change in the jet stream should bring a more persistent stretch of storms for mid-winter through March. In the U.S. southwest, expect more frequent periods of rain and snow, but not necessarily stronger storms,” Tardy said.

Of importance to RVers, the amount of rain could result in rock and debris flows due to saturated grounds following repeated storms, which will impact roadways. Burned out hillsides won’t be able to stem the flow of heavy rains, which means that lowlands and particularly desert areas may have massive flows. Roads and bridges could become risky.

Tardy also explained that drivers, even those in high-clearance vehicles, will face danger when trying to cross impromptu streams. In answer to questions about snow related to the precipitation levels, El Niño typically brings moderate snow levels (but not the “Pineapple Express”), but there is uncertainty about how persistent the jet stream will take the storms through the heart of the Sierra Nevada range due to the jet stream prevailing across Southern California. 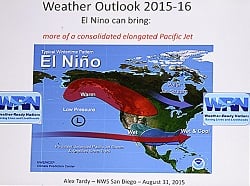 Will all this bring an end to the four-year drought? According to Tardy the answer is no. The Pacific Northwest, which is already a tinderbox for wildfires, will have less rain with warmer-than-normal temperatures. The arid condition has occurred because the 48 consecutive months for California prior to July 2015 were the warmest in history being 2.8 degrees above normal. Additionally, the snowpack last April 1 in the Sierra Nevada Mountains of California was a historic low at 5 percent on average.

There are, of course, skeptics. In Tardy’s opinion it’s better to say, “We over-prepared and it didn’t happen, than to underprepare and only react to hazardous conditions.” The consequences historically have been significant, such as the strong El Niño years of 1982-1983 and 1997-98 winters.

While the meteorologist cited previous El Niños in 1972, 1993 and 1998 that caused damage (with the worst being in 1965-1966), this promises to be much stronger with the highest rating ever seen this early.

“If there is a mid-winter break in the weather, it’s important to remember El Nino has its biggest impact between January and March,” Tardy explained. “Beginning in January there could be storm after storm.” 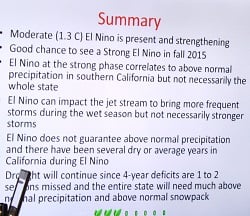 The summary of El Nino.

The San Diego-based meteorologist noted that localized flooding has already caused significant impact to Southern California’s mountains and deserts, the result of major monsoon episodes during the past three summers.

Measurements taken along the Equator in the South Pacific have been aberrantly different than in the NOAA’s history. The temperature of the water can be a reliable indicator of what’s to come – and what’s to come is a major shift in the jet stream. Changing from its pattern of hitting the U.S. Northwest, it is expected to enter Southern California with all its might. That could mean that RVers will experience more rain along the Gulf of Mexico regions for a brief period, but that will dissipate.

Taking your rig to Baja next spring? Be ready for more rain along those narrow roadways.

Tardy’s presentation, verified with maps and charts, was an eye-opener for those attending.   Deep-colored weather patterns educated the audience about what has been happening and what’s expected.

The good-news, bad-news is that it may not happen. While strong El Niños usually indicate wetter weather, it hasn’t always come to pass. For example, according to Tardy, 1965-1966 started off very wet, but little rain fell after January, leaving Northern California much below average. He also explained that in 1991-1992, much of Northern California was very dry.

If it doesn’t impact the jet stream greatly, prolonged hazardous driving conditions associated with RV travel will be much less of a factor – that’s the good news. On the other hand, no El Niño will mean that the severe drought with low water supply in the West – a major factor in higher food prices across America – won’t be eased. Even with El Niño, the drought won’t be alleviated.

Tardy predicted that if the El Nino effect does materialize, part of the country won’t feel intense effects from the weather system (except at the grocery store), however residents from Southern California to Texas and Florida in the lower 48 states are advised to begin preparing for the onslaught of storms, particularly in areas of poor drainage and low areas where the flow of water (from what could be the worst storm system in our lifetime) could change the landscape dramatically.

Barry Zander and his wife Monique (a.k.a. the Never-Bored RVers) have traveled 49 states, seven provinces and Mexico in their 28-foot travel trailer. They give presentations at RV events on getting started with RVing, focusing on lifestyle decisions. Barry has been a newspaper editor, congressional lobbyist and owned an advertising/public relations agency before Barry and Monique sold their home to travel North America.

The Zanders continue to RV from their cabin in Idyllwild, CA.