You are here: Home / Top Stories / Nature’s Amazing Show at Yellowstone
This post may contain affiliate links or mention our own products, please check out our disclosure policy here.

“Nature is ever at work building and pulling down, creating and destroying, keeping everything whirling and flowing, allowing no rest but in rhythmical motion, chasing everything in endless song out of one beautiful form into another.” —John Muir, naturalist and explorer (1838-1914)

The earth is a living organism. We see this on the evening news: hurricanes along the Atlantic and Gulf coasts, snowstorms in the northern states, tornados in the Midwest, earthquakes, tsunamis, and volcanoes around the globe. When we visit a natural history museum we learn that the surface of the earth is a shell riding on a core of molten rock called magma, which lies 50 to 60 miles beneath the surface. This shell is divided into tectonic plates that slide and collide, creating our continents—also creating those volcanoes and earthquakes. No place is this vibrant change more apparent than in Yellowstone National Park.

Some 640,000 years ago, this magma layer formed a huge bubble at Yellowstone and exploded with tremendous force. The area overlying the blown-out part of the magma collapsed to form a giant caldera or dip in the surface. This caldera is 30 miles wide by 40 miles long. Under it, the magma layer is only three to four miles beneath the surface.  Water seeps through fissures and cracks in the ground and is heated by this magma.  Mud bubbles up, geysers spout gallons of boiling water into the air, and steam rises from hundreds of fumaroles (steam vents) until it seems the very earth itself is on fire!  This violence resides alongside the peace of quiet meadows where bison graze, sparkling rapids glitter on swift-flowing rivers, lakes are placid, and forests are abundant—beauty formed out of devastation.

Yellowstone is the first and of America’s national parks. When explorers discovered and first wrote about the geysers, mud pots and steam pools, they were not believed. In 1869, an expedition led by Ferdinand V. Hayden, head of the U.S. Geological Survey, went into the area with painter Thomas Moran and photographer William Henry Jackson. When the reports were published and distributed, a movement began to protect this fragile land. In 1872, President Ulysses S. Grant signed the bill creating the first national park. There was opposition. The commercial interests—lumbering, mining, oil exploration, hunting and trapping—all wanted to profit from the area. Even when the park was dedicated, the salvagers and souvenir hunters did a considerable amount of damage to ecological systems.  Finally a U.S. Army cavalry unit was sent in to protect the park and its animals from thieves and poachers.  From this early protective force, the National Park Service evolved. 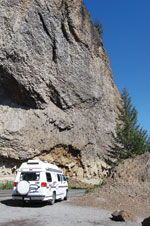 My wife, Grace, and I, drove into Yellowstone from the west on the first Sunday in August without camping reservations.  There are 12 campgrounds; seven are owned by the National Park Service and are occupied on a first-come, first-served basis. We were told at the entrance gate that limited camping was available at the most southern site.  But by the time we reached there at dusk the “Campground Full” sign was up.  We drove back up the road. I prefer not to drive after dark and had no idea where to go anyway, so when we saw an empty parking area by a lake, we stopped.  Sunset over the lake made spectacular photos; then we were both exhausted. We decided to face whatever would happen if it happened.

About midnight we were wakened by a ranger. When we explained that we could not get a site, he kindly allowed us to stay the night. However, he took our license plate number and warned us that we’d be fined if caught parking outside of a regular campground at night again. The next morning we went to one of the campgrounds owned by Xanterra, the concessionaire, and were able to make reservations for five nights in four different campgrounds.  In the midst of the summer season, we recommend making reservations in advance to assure a site.

Each day we went to a different area of the park. There is much to see!  There are two loop roads joined in a figure eight pattern. These were designed by Dan Kingman, a talented officer in the Army Corps of Engineers in 1838.  Both loops have more than a day’s worth of sites to review.  We purchased the book, Yellowstone: The Official Guide.  It lays out all the sites to be seen along the two loops and the five entrance roads. It is an invaluable guide to determining which of Yellowstone’s many attractions will benefit your journey.  It may be purchased before you arrive through the website at YellowstoneAssociation.org or at any of the park’s visitor center bookstores.

There are four types of thermal features to be seen and experienced.  A hot spring is a pool of superheated water that cools and circulates as it reaches the surface.  The great variety of colors is formed by light reflection, minerals, and microorganisms in the water.  A geyser is a hot spring with a restricted opening beneath the surface.  Like a pressure cooker, the superheated water builds up enough pressure to flash into an explosion of steam that shoots high into the air.  A fumarole is a steam vent.  The superheated steam rises through cracks and fissures to vent almost continuously.  A mudpot is a pool of water containing microorganisms that convert the water into hydrogen sulfide.  This acid dissolves surrounding rocks into clay, which mixes with the steam and heated water to form mud of varying colors.

The water and the ground around hot springs are boiling hot and can be dangerous.  Children must be controlled and pets are not allowed on the boardwalks.  The colors are magnificent.  Each hot spring is different: some are red, orange, yellow, blue, purple, green and muddy brown.  The wide variety of colors is due to the minerals, algae, heat-resistant microorganisms, bacteria, and fungi along with seasonal temperature changes and reflected light from the sky. Each hot spring is a frightening reminder of the intense heat beneath the earth’s surface. Near some, the heat has turned the area fallow where nothing will grow; near others the surrounding land and trees are pure white—covered with the mineral calcite.

The recovery of life from hardship is demonstrated through forest fires. In 1984, the Yellowstone area had tremendous wind storms that blew down thousands of trees; then came four years of extreme drought, with 1988 being the driest in 112 years.  Lightning started many fires which grew together and burned 36 percent of the park’s forests.  The signs of this disaster show in acres of standing poles—leafless and dead trees that have not yet fallen. But they will fall. Beneath these dead forests there is new life and new growth—young trees, flowers and plants that have sprouted since 1988. The cone of the lodgepole pine needs fire to burst open and spread its seeds. So fire has given birth to the new trees, removed the undergrowth so they may sprout, and burned away the shade from older trees to allow them to grow and flourish. 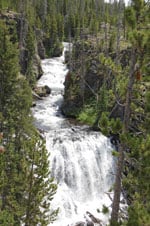 Other areas of the park are pure, awesome beauty. Forests that have not burned are cool and shady. Placid Yellowstone Lake is the heart of the caldera. The Yellowstone and Firehole rivers wind through the park. There are peaceful meadows where bison, elk, and deer graze, dramatic waterfalls enchant, nature trails provide places to walk, and dynamic vistas inspire awe and wonder.  A variety of activities await: 1,000 miles of hiking trails, fishing, ranger talks, visitor centers, bird and animal watching, photography, and just enjoying both the drama and the peace of nature.

Of course there is enough wildlife in Yellowstone to satisfy the most adventurous tourist—61 species of mammals, 18 fishes, 315 birds. Bison reign supreme. When one crosses a road—traffic stops!  Elk are prevalent.  We saw one run down a path through an amphitheater just before a ranger was starting a presentation.  Black and grizzly bears, pronghorn and big horn sheep, moose, and coyotes are in the park, but are more elusive.  Wolves were introduced in 1995 and are thriving.  Rangers warn that all are wild and can be dangerous.  Except for the tourist corridor along the roads and villages, most of the park is still in its primitive, wild state: a perfect environment for a natural ecosystem.

Our visit to Yellowstone was a culmination of lifelong dreams. We are both photographers and found hundreds of beautiful, unique and interesting scenes to capture for future memories. We left quietly by the east entrance through the red rocks of the Absoroka Range driving toward Cody, Wyoming.  The experience far exceeded the expectation.  Realizing that such incredible beauty can rise out of the devastation of an earth-shattering volcano is an eye-opening rise in consciousness.

Pete Gray began full time RVing in December 2003 and is a prize-winning photographer whose scenic photos have been sold through a California art gallery. His articles have appeared in MotorHome, Escapees Magazine and RV Life.