You are here: Home / Departments / Product Spotlight / New Era Offers Comfort, Value
This post may contain affiliate links or mention our own products, please check out our disclosure policy here. 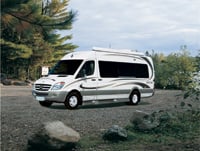 Economy and luxury are combined in the Winnebago Era, a class B motorhome built on the Mercedes-Benz Sprinter chassis with a six-cylinder 188-horsepower turbo-diesel engine.
Winnebago is marketing the Era as a superior value, since  its suggested retail  price of under $102,000 is substantially less than that of its leading competitor.

The advantage of a Class B motorhome is that it can be driven almost anywhere you can drive a car. The cab of the Era is designed for comfort and convenience with Ultraleather seats, and an RV Radio that plays CDs, has an iPod/MP3 input and a weather band and features a touch screen control panel that incorporates a rearview monitor. You can add an optional entertainment and GPS system.

The 2013 Era is available in two floor plans, the 70X and the 70A. The 70A has a flex bed system at the rear that can be made into a large queen bed or two twin beds. There is also a sofa bed. Another feature is an LCD TV that swivels so it can be viewed either from inside the motorhome or outside, while sitting under an awning.

The 70X has a large sofa at the rear that folds down into a large bed at the press of a button. There are four captain’s chairs that swivel to face a moveable pedestal table.

The galley features Corian solid-surface countertops and includes a two-burner range top, microwave oven, refrigerator/freezer and a stainless steel sink with a faucet that folds down beneath a glass cover to increase counter space.

The two floor plans of the Era carry suggested retail prices of $101,590 and $101,927. For more information, visit a Winnebago dealer or see winnebagoind.com.