You are here: Home / RV News / Newell Coach Introduces New p50 Edition
This post may contain affiliate links or mention our own products, please check out our disclosure policy here. 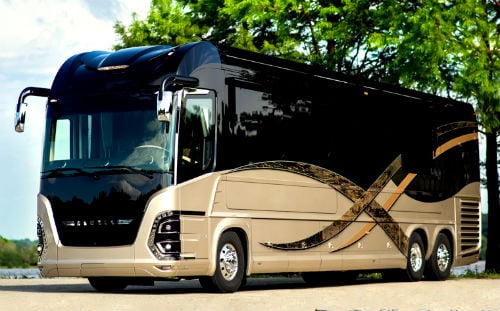 The exterior profile of the p50 Edition

Custom motorhome manufacturer, Newell Coach of Miami, OK., recently announced its all-new p50 Edition body design for the company’s series of coaches for 2017. Three years in the making, the p50 brings a new profile to its line of models ranging from 39 to 45 feet. And while its motorcoaches have undergone minor changes to its body styling in recent years, the p50 introduces many exterior modifications and comes standard on all new coach orders.

“We had changed the rear cap in 2004 and changed the front cap in 2006, which proved to be very popular,” explained James Neatherry, Vice-President of Engineering for Newell, to RVlife.com. “Since then we have been doing some minor chrome and other details, but for 2017 we thought it was time to start fresh and do a complete restyling of the whole exterior.”

Neatherry explained the redesign was the result of collaborating with Porsche Design Group, which provided input and styling cues for the p50 based on initial concepts from Newell. Newell then took the concept and brought it to life through engineering and product development to make the p50 production-friendly.

“We started talking to Porsche three years ago and worked with them for more than a year just on the styling and design,” said Neatherry. ”The remaining two years has been executing the engineering behind the design. We kept it very quiet for a long time and it didn’t really come to light until we started road testing.” 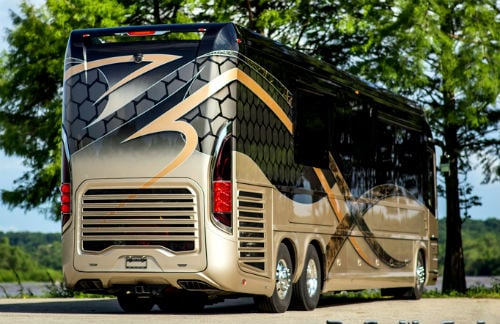 The p50 was the result of collaborating with Porsche Design Group, which provided input and styling cues.

The outcome from Newell was several exterior modifications to include:

“The interesting aspect with the p50 is that we wanted this approach to be evolutionary and not revolutionary,” says Neatherry. “So we took the front end, reshaped and sculpted it and kept some styling cues from the previous design, but updated them.  We really tried to give the windshield a new look and it comes way down on the body. There’s also a unique spoiler on top of the front cap. Some of the unique body molding made the design sleeker and fit to the overall body of the unit better. ” 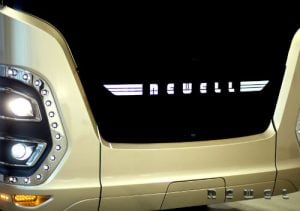 Be sure to also see what other RVers are saying about Newell Coach and its coach line.