You are here: Home / Top Stories / On the Road at 89
This post may contain affiliate links or mention our own products, please check out our disclosure policy here.

If 50 is the new 40, and 70 is the new 50, then certainly Eleanor Leeper’s story is not extraordinary. She’s 89 this month, so that’s just 69 or so. But even so, Eleanor’s solo lifestyle on the road as a full timer, embarked upon just a year ago, does seem remarkable to those who meet her along the way.

Eleanor, whose husband, Jerry, died in 2006 after a series of strokes, has been RVing alone off and on since then. But one day, after preparing a particularly energy-sapping dinner for her visiting family, she made the decision. “I just said to myself, ‘I don’t have to do this anymore. I don’t have to drag out the bone china and the silver and go through this anymore.’”

So she set about going through closets and cupboards and getting rid of everything nonessential to life on the road. And that was that. A two-day garage sale, a meeting with a real estate broker to discuss the prospects for renting out her home in the popular vacation paradise of Ouray, Colorado, a serious talk with “the kids,” and she was ready to roam.

“They gave me a little grief over it, but they surrendered pretty quick,” she remembers. “Now they don’t say much. And they haven’t taken the keys away from me yet.” As a matter of fact, one of her daughters-in-law searched the Internet for her and found the perfect 2007 Born Free Class C motorhome with only 10,000 miles on it, and her son flew out to California to pick it up for her. “I bought it sight unseen, and it was perfect for my needs,” she says.

Actually, it’s not hard to understand why the kids don’t say much. Eleanor has been a farmer’s wife, the proprietor with her husband of an arts and cultural center that they built, and president of five family-owned corporations in construction and real estate. In short, Eleanor’s life gives new meaning to the word “independent.” “German on my mother’s side,” she explains.

Independent and fearless, Eleanor has no apprehensions about her solo RV lifestyle at all. “I haven’t had an accident in 73 years of driving other than two deer running into me.” Besides, she notes, “Statistics show that most accidents happen within two miles of home. So I moved.”

On the road while traveling to a destination, she says, “I use caution, I park under lights, I service the RV regularly…that kind of thing.”

Eleanor has been RVing for some 50 years. She and her husband of 61 years started out in 1965 with a six-week family trip to Alaska in a school bus that they paid $200 for and rebuilt themselves with help from their teenage son. Five years later, the family made another major journey in the converted bus to the East Coast and Nova Scotia before selling the bus and moving on to a series of new and used motorhomes. So Eleanor is no stranger to the RV way of traveling.

Her travels now take her throughout the U.S., visiting her children, other family members and friends. Her five children live in Illinois, Colorado and Montana, and she visits each family regularly. She also joins other Born Free owners at rallies sponsored by the Born Free Leap’n Lions RV Club. Her recent travels included a rally at the Born Free factory in Humboldt, Iowa, and a gathering sponsored by the Born Free club in Door County, Wisconsin, where she joined 70 other motorhome owners for four days of sightseeing excursions. 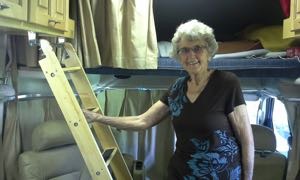 In addition, she says, “Since I bring my own bed, I don’t mind inviting myself places, and if I receive an invitation, I readily accept.” Her bed is the cab-over kind, and she climbs a five-foot ladder to get in—not much of a feat for a 5-year-old but an exceptional accomplishment for someone of her advanced years. “It’s not a big deal, really,” says this spritely, slim senior.

Part of the reason for her vitality and longevity, Eleanor believes, is that she eats healthfully, exercises daily and trusts in the Lord. She once prided herself on her home-baked pies, cakes and cookies, but gradually came to embrace a more nutritious way of eating. At this point in her life, she doesn’t enjoy cooking just for one and is grateful for the many dinner invitations she receives. When she does cook for herself, it’s oatmeal and dates for breakfast, an assortment of fruits and vegetables, and items prepared with flaxseed and almond milk, for instance.

Does this octogenarian ever get bored with her unusual-for-her-age lifestyle? “Not for a minute,” she says. Nor is she afraid of traveling alone. “I haven’t watched television for 35 years so I don’t see the bad things,” she explains. She loads up on DVDs and CDs from the local library for entertainment, and she is a passionate reader of nature publications, novels and nonfiction political books. She’s also made it a habit for 40 years to read the Bible cover to cover each year. While she eschews television programming, she does travel with a laptop and subscribes to Sirius satellite radio. “That’s how I keep up with my friends and the news.”

Eleanor has no plans to return to the life of a suburban homebody anytime soon. She admits, however, in a tone of cheerful anticipation after a life well lived, “I could go any time now.” In the meantime, she’s on the road to her next adventure.

Helen Fritz Hornbake is a freelance writer and RVer who lives in Gettysburg, Pennsylvania.