You are here: Home / Blog / On the Road with No Reservations
This post may contain affiliate links or mention our own products, please check out our disclosure policy here.

Upon asking what their summer RVing plans were, friends replied, “Our schedule is written in Jell-O.” I have to say that my future (in so far as I have any control) with this move from Arizona to Washington is written in Jell-O, as well. I’ll see where it leads!

My friends were shocked at my decision to head north. The first questions were: “Are you going to buy a house? A condo?” No. I don’t want to take care of anything anymore.  As many of my contemporaries had, I grew up in an era where to “own” something was the ultimate goal.  However, at this time of my life, I want to be free to pursue other interests!  “What interests?” I have no idea…yet.

Within my 20 years of full-time RVing, I bought property in the high desert an hour northwest of Phoenix and by the time I sold my RV in 2007, I was curbed with a back injury. With surgery plus therapy and time, that has mostly resolved but I have missed RVing a whole bunch. While I don’t feel that going back to full-time RVing is an option anymore, I have a permanent case of “itchy wheels” that can never be controlled by surgery, therapy or Cortisone-10!  Moving to a completely different part of the country was drastic but then again, why not? 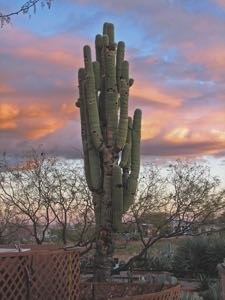 I loved my North Ranch Escapee 50-foot by 70-foot deeded RV lot with the park model/sunroom and shed office with the three-foot by six-foot window looking to the Bradshaw Mountains. During those years, I learned to love the desert and enjoyed my little piece of Arizona good weather. I faithfully trimmed my palo verde and mesquite trees. I arranged and rearranged the desert rocks to please my fancy.

I had become unhappy with the distances to major shopping, the airport and even church.  Possibly, this restlessness was a need to expand my horizons. If I was going to enjoy a change, I needed to do it while I was still in good health.

Friends warned me that my vision of living in our country’s “Great Northwest” was a summertime view and that the fall, winter, and springtime would likely be miserable and wet. Not so easily distracted from my mission, I checked it out. Aha! Sequim, Washington, is in the “shadow of the mountain.”  Mt. Olympus, 7,962-feet high, is about 35 miles away (as the crow flies) and takes the brunt of winter’s 200+ inches of rainfall and the rest peters out to roughly 16.6 inches by the time it reaches Sequim. Yes, I’m sure I will experience a fair share of gloomy days but I grew up in Michigan. We had gloomy days, too. 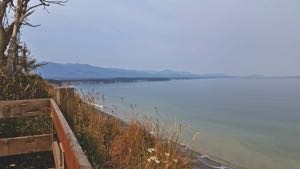 I am not as brave as once I was about jumping into new adventures with both feet, but I finally made the decision. The first obstacle was convincing my daughters (one lives in northeastern Washington state and the other in Virginia) that I was not choosing one daughter over another but choosing a “place.” The house sold with furnishings and with the help of friends, everything I still owned was packed into the back of my 2005 Town and Country Chrysler.

If you read my weekly online RVLife.com blog, “The Silver Gypsy,” you already know about my trip north. I had RVed North America east to west and north to south many times over the years so I didn’t need a specific plan or route, and I always did hate making reservations.

It felt great being on the road again, heading northwest to whatever awaited me.  The 1,478 miles took me four days and change, and I was tremendously excited as I proceeded up U.S. 101 with the bearded rainforest trees of the Olympic National Park to my left and Hood Canal to my right. Mountains and water-filled bays were part of my scenery the rest of the way to Sequim.

With the exception of the first five years of marriage, I have never lived “in” a town.  This is fun. I am within a few blocks of several box stores, an assortment of retail outlets, and a wide variety of chain eateries and unique restaurants. West of town is Sunny Farms Market, where I stopped many times over the years. They never disappoint with their fresh produce, meats, seafood and tasty made-to-order sandwiches. A farmer’s market lives in downtown Sequim on Saturdays. 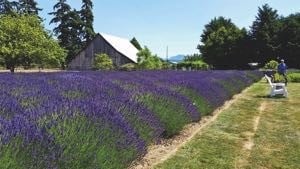 I was here in time to enjoy visiting the lavender farms as part of their yearly Lavender Festival. They also have the Sequim Irrigation Festival but I don’t know what that is…yet.  With the Olympic Discovery Trail, the Dungeness Recreation Area and the Dungeness Spit (our country’s longest natural sand spit), this place promises an active lifestyle as well as something for the soul via the Olympic Theatre Arts and the free summer concerts at the James Center for the Performing Arts.  The Sequim Aquatic Recreation Center has an indoor pool that I intend to make use of at some point.

For all of you RVers visiting the mountains, rain forests and beaches of our magnificent Olympic National Park, RV parks live here, including John Wayne’s Waterfront Resort.  Sequim Bay was such a favorite place for the actor that when he died, he bequeathed the land for a marina, and it has grown into a combination of not only a full and fancy marina, but waterfront cabins, RV spaces, and from what I hear, a wonderful eating experience at the Dockside Grill.

I had forgotten what a huge mountain of paperwork is required to move—changing banks, accounts, licenses, plates, voting, insurance, credit cards…the list seems endless.  Perhaps by the time you read this, I can truly say I am settled.  Some of those “ownership things” I gave to Habitat or friends or sold with the house had to be replaced for the apartment.  It is truly a new beginning and I do love stepping outside, looking to Olympic National Park’s mountains and seeing snow along the rugged ridges.

When the dust settles, I will explore those mountains and walk those beaches along with meeting new people and having new adventures. Although I have written about the Northwest many times over the years, I hope you will stick with me for a few more stories. God Bless.  (Hmmm, I think I’ll go find my favorite beach today!) 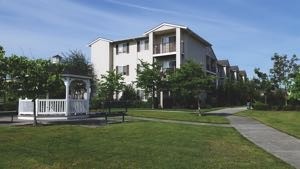 “Winter in the Wilderness,” Sharlene Minshall’s first novel (e-book & hard cover), and the fourth edition of “RVing Alaska and Canada” are available through Amazon.com.