You are here: Home / Top Stories / Pedaling Through History
This post may contain affiliate links or mention our own products, please check out our disclosure policy here. 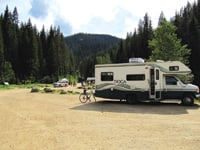 Named for the Olympian Hiawatha luxury train that once sped through the Bitterroot Mountains, the Route of the Hiawatha is now a repurposed family-friendly bike trail on the border of Idaho and Montana. Between 1947 and 1961, this route was known as one of the most scenic train rides in the world. Although the rails are long gone along this 15-mile stretch, the wilderness and wildlife are still here—as well as historic tunnels and trestles.

The Route of the Hiawatha is literally a beaten path—a hard-packed dirt and gravel surface that’s mostly downhill. With more than 40 interpretive signs along the way, there are plenty of good excuses to stop and take a breather while learning the area’s railroading and mining history. Except for a small portion of the route, no motorized traffic is permitted, but if you listen closely, you might still hear a ghost of a train whistle carried on the wind!

Depending on your ambition and amount of time you have to explore the Route of the Hiawatha, choose a 30-mile round-trip ride, or cut that in half by hopping a shuttle back to the start. Or, by taking advantage of well-placed Moss Creek Trailhead, riders can also opt for an out and back 15-mile segment in the middle of the overall route (turning around at a sign marking the former town site of Falcon). This “best of” route encompasses most of the trail’s finest features—six tunnels and seven high trestles. Because of the gentle 2 percent grade, even pedaling back uphill is doable for almost everyone.

Starting in the Dark 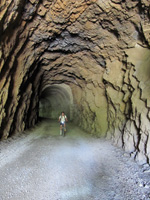 If you begin your ride at the official start and top elevation (4,147 feet) of the Route of the Hiawatha—the East Portal—you’ll immediately enter the 1.7-mile long St. Paul Pass/Taft Tunnel burrowed under the Idaho/Montana state line. Good thing a bike light is required on the trail because you will definitely need it to navigate the deep darkness (bringing an extra headlamp is also a good idea). Although no tunnel along the route is artificially lighted, most of the others are short enough to see the proverbial light at the end.

The Taft Tunnel was completed in 1908 thanks to the tenacity of 750 hard-rock miners toiling around the clock for two and a half years. It was not easy work, and the average immigrant laborer earned just a dollar a day. Mountainous terrain, deep winter snows and several large veins of water presented construction challenges, and made for wet and miserable working conditions. Most of the tunnels on the Hiawatha were dug by hand using sledgehammers and hand drills. In some cases, such as with the Taft Tunnel, steam-powered drills and steam donkey engines were hauled to the worksites to speed the digging process. 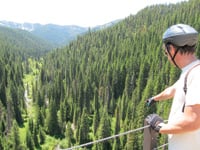 Construction was expensive—this was by far the most costly railroad ever built at the time. The harsh geology of the Bitterroot Mountains was mostly to blame for the price tag that ran into the tens of millions of dollars. Chugging through northern Idaho required mile after mile of switchbacks, tunnels and trestles.

You’ll find that the features that created a mild grade for train travel are also great for mountain bikes. As you pedal over the trestles, stop and look over the railing. It’s a couple hundred feet down to the ground! The tallest bridge, built over Kelly Creek, is 230 feet high. These trestles are steel now, but the first ones were made of wood or back-filled earth.

Fast Work
Between 1906 and 1912, a large work force was hired to complete the original railway as quickly as possible. Men and their families lived in nearby tent towns or in hastily built houses. Signs along the Hiawatha point out the former settlements of Roland, Falcon, Pearson and Taft. The latter is now buried beneath Interstate 90. General stores, a hospital and a hotel served the population, as did a larger number of saloons, dance halls and houses of ill repute. Winters were brutal and crime was high, but the hardy souls stuck it out until the work ran out. Except for a few rusty relics, the rails, signals, switches and labor camps are long gone. 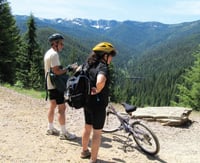 Although expensive propositions, building railroads was a necessity. In the early years of the twentieth century, if you wanted to travel from coast to coast, you took trains. To meet demand and make money, transcontinental railroads were rushed through anything in the way. The railroads literally moved mountains. This particular route over St. Paul Pass was especially coveted because the St. Joe River offered exclusive access to huge quantities of old-growth timber. It also made a great deal of sense, and cents, to electrify portions of the railroad. Doing so reduced the high cost of oil-fired, steam-powered locomotives. And those owning interests in copper and electrical power probably didn’t make out too badly either!

Completed in phases, the first section of rail line was electrified between 1912 and 1917. When the second phase was finished in 1920, the Milwaukee Road boasted the longest stretch of electrified mainline railway in the world. People came from all over to see this modern marvel. To take advantage of the public’s curiosity and the mountain scenery, a new streamlined train called the Olympian Hiawatha was added in 1947. From Chicago to Seattle, this luxurious and futuristic orange train carried passengers in comfort and style. Amenities on board included first class Pullman sleeping cars, chef-prepared meals served in an exquisite dining car, comfortable reclining seats, and “Skytop” and “Super Dome” lounges. These glass-domed observation cars were like rolling solariums offering unparalleled scenic views.

Devastating Fire
The Route of the Hiawatha is listed on the National Register of Historic Places in part because of its association with the Big Burn of 1910. At the time of the great fire that burned more than three million acres in Idaho and western Montana, the railroad had been operating for only a short time. Trains were running, but construction was still under way on many of the high timber bridges. Luckily, the tunnels along the Hiawatha were finished. They turned out to be real lifesavers. 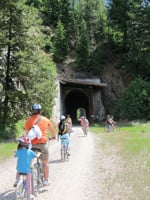 As the inferno raged over two days—August 21 and 22—about 25 miles of railroad between the town of Avery, Idaho, and the Taft Tunnel were consumed. Considering that about 1,000 railway workers and their families lived in this area, it’s amazing that only one death occurred along the Hiawatha (86 people perished in total). The grave of an unknown railroad laborer known as a “gandy-dancer” is marked on the route. Witnesses say the man panicked and jumped from the rescue train. Everyone else survived the flames because they stayed on the train and made it into tunnel 27. Everything up to the tunnel portals was destroyed. As you pedal through this tunnel, take a moment to consider what it would have been like to wait out a brutal blaze here. Other fires in the country have been more deadly, but none moved as swiftly from hurricane force winds as did the Big Burn of 1910.

Riding the Route of the Hiawatha is a treat for the entire family. Not only is this section of America’s Rails to Trails a chance to get a little exercise while traveling, but it’s also a chance to spot deer, elk, moose and smaller critters as you pedal. Choose the distance you want to cover, watch for wildlife, and enjoy a scenic and historic journey through cool tunnels and over high trestles. And the best part is, no matter where you enter the Route of the Hiawatha, it’s all downhill from there!

The Route of the Hiawatha is on U. S. National Forest land administered by the St. Joe Ranger District of the Idaho Panhandle National Forest. Lookout Pass Ski and Recreation Area operates the trail under a special use permit from the Forest Service. Fees go toward maintaining the trail. Monitors ride the route every day to ensure rider’s safety and compliance with fees and regulations. The Hiawatha Trail is typically open daily from 8:30 a.m. to 5 p.m., May to October.  Projected opening date this year is May 25.

If you’re not traveling with your own mountain bike, you can rent one at the Lookout Pass Ski Area, located adjacent to Interstate 90 at the Idaho/Montana state line, 12 miles east of Wallace, Idaho.  Adult mountain bike rentals are $30 or $36 per day and include mandatory helmets and lights. Use of bike racks is free. Child bike rentals run $20. Trailers for pulling little tikes behind mom or dad’s bike are $20-$22. Prices are subject to change. For information, visit ridethehiawatha.com.

A pass is $10 for riders over 13, and $6 for those between 6 and 13. Children under 6 are free. The pass must be visible and attached to your handlebars. Children under 14 years of age must be accompanied by an adult. No dogs are permitted on the trail. The ride is suitable for family members of all ages and is a gentle downhill ride all the way. It descends about 1,000 feet of elevation over 15 miles.

Shuttle tickets are an additional $9 for adults and $6 for children (no charge for bikes on shuttle).

Large parking areas can accommodate all sizes of RVs.

Restrooms are located along the trail, but not food or water. Be sure to bring more water than you think you’ll need, especially if riding on a hot summer day.