You are here: Home / Columns / Tech Tips / Performance Chips Boost Power
This post may contain affiliate links or mention our own products, please check out our disclosure policy here. 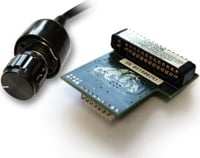 Under the hood of your tow vehicle, hidden away in a “black box” somewhere, resides your truck’s electronic brain, which controls the engine to ensure eco-compliance, and deliver good fuel economy—generally balanced against engine performance. We learned a lot about that a few years back when we bought a used diesel pickup. The original owner had spared little expense in souping up the 1996 diesel for towing—including the installation of an aftermarket performance chip, an add-on device that typically increases engine performance.

We were happy as little clams until that aftermarket chip conked out, and we were back basically to the “stock” settings that the truck manufacturer had built into our rig. We called the chip manufacturer and were assured we could easily replace the chip for a few hundred dollars—and we gave it some serious thought. But about the same time, we happened upon an idea called a tunable chip.

Unlike our aftermarket performance chip, this chip offered options that would allow the driver to “tune” the truck’s performance. A dash-mounted switch could be flipped through various positions. At setting one, the rig acted like a stock truck. Jump to setting two, add some more horsepower. Go to setting three, even more, and wow, on setting four—look out! Another setting allowed for running the engine at high idle, great for those really cold days.

We contacted Bully Dog Technologies, headquartered in Idaho, in search of more information. In the end, the company provided us with a six-position tuner suited to our truck. We’ve driven several thousand miles now with the tuner, and have this information to relay to our readers.

Installation
Some chip tuners come with fancy monitors that show boost, temperature, and a host of other dash-displayed information. We’d love to have one, but alas, for our “vintage” pickup, no such animal was available. Instead, we got a chip with a length of wiring attached to it, and the dash-mountable switch to be placed in easy reach of the driver. You may find a tuner for your truck that easily plugs into the rig’s OBD II port, right under your dash. It’s a quick and easy install. Ours was a bit more complex.

Our new chip had to be mounted in the vehicle’s computer box. In our case, this meant a job better suited to a contortionist than a shade-tree mechanic. In the end, we found that by removing a fender-well splash shield, we could gain access to the computer. We carefully cleaned up contact points where the new chip would plug in. From there the computer box was closed up, the wiring to the dash routed, and the control switch mounted in the dash. In all, about three hours were needed to do the job with justice.

And How Does It Work?
We took the modified Ford out for a little spin around a long block, and down a long stretch of two-lane blacktop and out on the freeway. This was done without our 24-foot travel trailer, just to “get a feel” for how things went. Position one was a snoozer; the truck ran as we had gotten used to when the old chip had died. Position two gave us a bit more “get up and go,” and in third position, we definitely knew there were some horses kicking around under the hood.

Going for the gusto, we flipped up to the fourth position on the tuner control and hit the gas. From a dead stop to sixty, I’m afraid the g-forces kept me from keeping track of the time. However, one quick peek in the rear view mirrors verified that we had left some pretty clear—or should I say, dark—traces of our passage. Black diesel smoke had belched out of the tailpipe. It didn’t take too long to reckon we didn’t really need position four.

Towing is where we found the Bully Dog tuner shone like a star. Our 8,000 pounds of trailer lets us know “it’s back there” when towing. By slipping the tuner into position three, hill climbing and quick-pace freeway entry became a breeze. Mind you, we have an exhaust gas pyrometer on the windshield pillar. Don’t even think about installing a chip tuner without investing in a good pyro—in position three we can easily start running up plenty of heat, enough to do serious damage to a diesel turbo.

What About Fuel Economy?
While chip tuners are primarily designed for performance, we did find that with careful driving, our fuel economy increased. This was particularly notable when driving solo. Our around town fuel economy went up from 12 to 13 miles per gallon to as much as 15. We generally keep the chip set in the second position for solo driving.

With all that weight, and the mass of a big box breaking through the air, we were really happy to have the performance. But what surprised us even more was that our towing economy increased in many towing environments. Before the installation of the chip tuner, we’d slink around in the 10 to 11 miles per gallon range. With the tuner set in position three, we see 11 to upper 12 miles per gallon, provided we aren’t bucking a head wind. Over hill, over dale, we don’t mind that kind of a reading.

And the Downside?
A transition year for OBD II engine computers was 1996. Gas-fired engines were then required to be able to produce diagnostic codes that could be read with the appropriate “code reader.” Diesel manufacturers were given more time, but even so, our 1996 did in fact produce readable codes, and we had a reader that could scan them. However, with the tuner chip in place, we suddenly said, bye-bye to scan codes. If something goes haywire with the control system, we’ll evidently have to remove the computer chip to be able to read the scan code. Not a pleasant thought. Presumably newer chip tuners don’t have this issue.

Chip tuners aren’t inexpensive. Presently a three-position chip tuner akin to the six-position one that we have retails for over $300. Tuners that are equipped with the fancy LED readout systems can range from the $600 range up close to $1,000. But compared with the price of replacing your present pickup truck with a newer one to get enhanced performance—well, the price of the tuner might be far more acceptable than that of the new truck.

And One More Thing
There are plenty of different tuner systems on the market. Some allow you to personally “tweak” your chip using a personal computer or other means. Tweak too much, and you can actually do some serious damage to your engine. Read that, “blow it up.” Damage your engine with an aftermarket performance chip, and your manufacturer’s warranty may not cover the matter. So look closely at the fine print in your contract, and ask plenty of questions of whomever you purchase any aftermarket chips or programming systems.

Check too, to make sure that whatever system you install is “state legal.” Your engine may hum like a champ, and run right over the top of the mountain pass without breaking a sweat. But if you pull in for a smog check, you may find that some tuners will burn “dirty” and fail to pass a smog check.

You can check out the Bully Dog system at its website at bullydog.com.