You are here: Home / Blog / Petit Jean – Arkansas’s First State Park
This post may contain affiliate links or mention our own products, please check out our disclosure policy here. 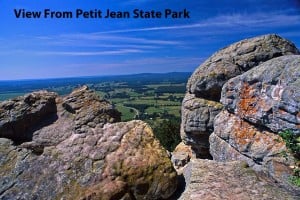 In my home state, we have a saying, “Arkansas State Parks. Aren’t you glad we’ve got ‘em?” That slogan, voiced by the well-recognized voice of Grandpa Jones, star of the Grand Ole Opry and television’s “Hee Haw,” played on airways for several years. Indeed, Arkansans are proud of our state parks. Each one has a different history, a different atmosphere, and a different purpose in showcasing the Natural State. 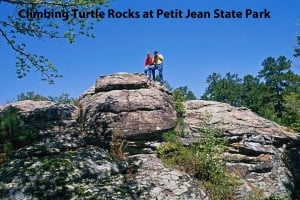 Long before Arkansas had a concept of state parks, Native Americans—nomads, hunters, and gatherers—used one of the state’s largest bluff shelters as a stop-over on their wanderings. They left behind pictographs located high on the back wall of the cave, evidence of their existence as bluff dwellers. Today, Rock House Cave is an archaeological historical site and visitors can access it on the Rock House Cave Trail at Petit Jean, Arkansas’s first state park.

I was a pre-teen on my first visit to Petit Jean, accompanied by two adult friends of my parents. The Legend of Petit Jean, marked by a long-ago grave, captured my imagination. The story goes…Chavet, a young French Nobleman, lived in the 1700s during the French exploration of the New World. He requested permission to explore a part of the Louisiana Territory, and for a grant to claim part of the land for France. The King agreed. 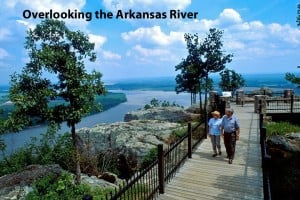 But the young Parisian to whom Chavet was engaged did not agree. She asked for an immediate wedding so she could accompany him to the New World. Thinking of the hardship and danger in crossing the ocean, Chavet refused. If he found the country good, they would marry upon his return, and then travel back to the New World to spend the rest of their lives. Chavet’s intended did not accept his refusal. So in love with the young Frenchman, she could not bear to see him leave. She cleverly disguised herself as a cabin boy and applied to the ship’s Captain to go on the voyage. She called herself Jean. The sailors on board called her Petit Jean.

Not even Chavet recognized his sweetheart. No one suspected she was a girl named Adrienne Dumont. The ship crossed the Atlantic in early spring and ascended the Mississippi River, and then the Arkansas River, landing at the foot of a 1,100-foot mountain that resembled the prow of a large ship. The Indians on land greeted the voyagers with hospitality and invited them to the top of the mountain. Chavet, his sailors—and the cabin boy, Petit Jean—spent the summer with the Indians. Petit Jean fished the streams and hunted the forests alongside her lover and the ship’s crew. When fall approached, the men prepared to sail back to France, promising the Indians to return the following year. They provisioned the ship with stores of food and water. Chavet, the sailors, and Petit Jean went aboard the evening prior to their departure. During the night, Petit Jean became violently ill with fever, convulsions, delirium and, finally, a coma. Of course, during her disorientation, the men discovered her true identity. At daylight, the departure was postponed. During a lucid moment, she confessed her deception to Chavet and begged his forgiveness. Acknowledging she could not live to reach France, she asked that he carry her back to the mountaintop for her last days. On a stretcher of deer skins, Indian tribesmen conveyed the young Adrienne back to their camp on the brow above the Arkansas River. Her strength ebbed. At sundown, she died. Two centuries later, Arkansas’s first state park received Petit Jean’s name. 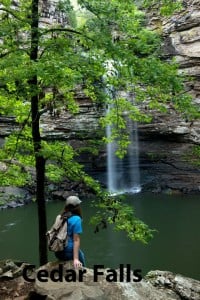 I remember that sunny day we picnicked close to the low mound of earth in a cove on the east point of the mountain. A marker inscribed with the legend identified the grave of Petit Jean. Is it true? No one will ever truly know. However, the tale creates an air of enchantment over the mountain that endures today.

Settlers—English-speaking Americans—homesteaded on the mountain from 1840 to 1850. The simple log cabin of farmer John Walker from North Carolina stands today at the entrance to Cedar Creek Trail. The idea for a recreation area on Petit Jean Mountain formed in 1907 when a party of stockholders in the Fort Smith Lumber Company inspected the mill and timber areas on the mountain. Their business trip turned into a week-long holiday of horseback riding and hopping log trains through the valleys and over the mountain. When the men explored Seven Hollows, they determined the logging of that region would be at a monetary loss. They decided the trees should live out their years unmolested by axes or saws. One in the party suggested that the area be offered to the United States government as a national park. The idea hung around until 1921 when Congress decided the development was too costly; the land not extensive enough, and its natural beauty not unique in the nation. Two more years passed before the Arkansas governor signed a bill that passed without dissent in the legislature to accept the mountain and surrounding acreage as Petit Jean State Park.

In 1933, a company of the Civilian Conservation Corps (CCC) was assigned to Petit Jean State Park. Most of the CCC men were WWI veterans, seasoned in construction. They worked on the mountain from 1933 to 1938, starting a native stone dam for the formation of Lake Bailey, completing a water tower, building roads and trails, and constructing the impressive Mather Lodge, pavilions, and the Davies Bridge over Cedar Creek to Red Bluff Drive.

Petit Jean State Park offers 21 miles of trails through woods and quiet glades, along side gurgling streams, past towering sandstone bluffs, and dropping into rugged hollows that end with views of waterfalls. The trails range from easy to moderate to the more difficult Boy Scout Trail. The park’s Visitor Center boasts exhibits about Petit Jean’s history, as well as Arkansas-crafted gifts. The park also has lighted tennis courts and volleyball courts. Throughout the year, park rangers provide programs on various topics relating to the history, conservation, and environment of Petit Jean State Park. Family-friendly activities, such as an egg hunt for Easter and games on July 4th, fill the park’s calendar. 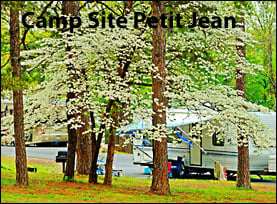 One of Arkansas’s historic treasures, the native stone Mather Lodge, underwent extensive renovation and reopened in 2012. Although the work did not affect any of the lodge’s original CCC and Works Progress Administration craftsmanship from the 1930’s, the dining room possesses a more rustic design and the expanded kitchen offers better service. A swimming pool and new restrooms were added. The park offers 33 guest cabins along the bluff of Cedar Creek Canyon, as well as two dozen guest rooms at Mather Lodge.

The Museum of Automobiles, privately owned, is located atop Petit Jean Mountain. The museum is home to the only Climber automobiles known to exist with the 1923 Climber Touring Car on display. Additionally, more than 50 vehicles are exhibited, ranging from a 1904 Oldsmobile French Front to a 1967 Ford Ranchero. Most of the vehicles were manufactured before 1950. 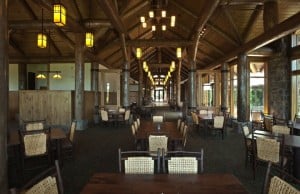 Petit Jean State Park caters to RVers, as well as tent campers, or those who have no equipment. The park offers 125 individual campsites, both pull-through and back in accommodations. In four campground areas with modern bathhouses, guests can choose from wooded or water-view sites. All sites provide water and electricity, and thirty-five sites have 50 amp service and sewer hookups. Rent-A-Yurts are available year round, furnished with the necessities for a camp-out. A 44-unit Rally-style camping area is also available.

Petit Jean is Arkansas’s only state park with its own airport. Aviation enthusiasts are accommodated with the airport’s fly-in campground, featuring five tent sites with water and electric hookups. A modern bathhouse with hot showers and flush toilets is on site.