You are here: Home / Blog / Petite Point Au Sable Lighthouse
This post may contain affiliate links or mention our own products, please check out our disclosure policy here. 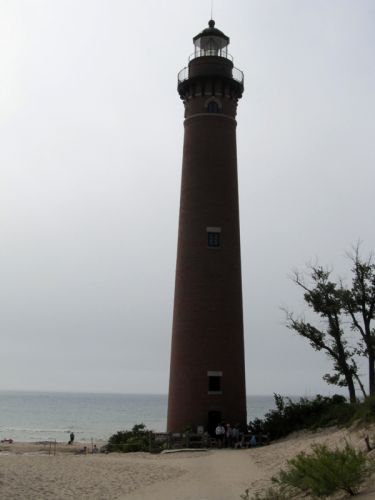 Did you know that more lighthouses dot Michigan’s shores than any other state?  Since the Great Lakes are well known for bad storms, that’s a very good statistic. If you’d like the chance to climb to the top of a 107-foot lighthouse dating back to 1874, be sure to stop at the Petite Pointe Au Sable Lighthouse (little point of sand) located in Silver Lake State Park on Michigan’s lower peninsula. Even if you decide against the trek up 130 spiraling stairs to the catwalk, the view from the shore is pretty nice, too. Forest and sand dunes surround the area. 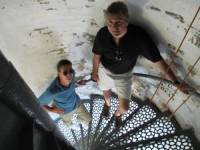 Known as Little Sable Point Lighthouse today, the presence and continuous use of its original Third Order Fresnel lens makes this a relatively rare light. It is one of only 70 such lenses still operational in the United States; one of eight in use in Michigan. A Fresnel lens (pronounced fray – NEL)  is a type of compact lens originally developed by French physicist August-Jean Fresnel especially for lighthouses . This lens is so special because it can be made much thinner than a comparable conventional lens, and can capture more oblique light from a light source, thus allowing the light from a lighthouse equipped with one to be visible over greater distances. Fresnel produced six sizes of lighthouse lenses, divided into “orders” based on their size and focal length. To give you an idea where a Third Order lens falls, a first-order lens has a focal length of 36 inches and an optical area 8.5 feet high. The complete assembly is about 12 feet tall and 6 feet wide. A Sixth Order (smallest) has a focal length of 5.9 inches and an optical area 17 inches high. You can get an up-close look at Little Sable Point’s lens when you go inside. A docent is on duty to answer your questions.

When the light was completed in 1874, a house was also constructed nearby to board the keeper, his assistant and their families. The tower was painted white in 1899 to make it more visible to ships during the day, but was restored to its original brick in the 1970s. In 1915, the original lard-burning wick lamp was replaced by a brighter kerosene-burning model. The light was electrified and automated in 1954, eliminating the need for a keeper. The house and ancillary buildings were then razed. The Little Sable Point Light is visible for 19 miles; the light flashes every 30 seconds. 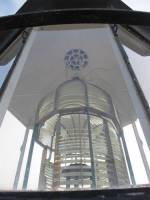 Usually open for tours daily from Memorial Day through September 30, 10 a.m. to 5 p.m.

Michigan State Park entrance fee is charged for all vehicles. In addition, fees to climb the lighthouse are $3 for adults and $1 for children.