You are here: Home / Top Stories / Pickin’ in the Square
This post may contain affiliate links or mention our own products, please check out our disclosure policy here. 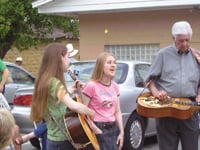 The breeze rustled the leaves, and at the other side of the town square, an RV pulled up. A man stepped out and began unloading a large acoustic bass while a woman unpacked a Dobro guitar.

“How about ‘Little Old Log Cabin’?” a bearded codger suggested to his companions sitting in the circle close by.

There was not a moment’s pause before the musicians started playing and the impromptu group broke into song.

I listened awhile, and then strolled on. I found another group where an excellent Dobro guitar player and fiddler had attracted a crowd that had settled into the lawn chairs they had so wisely brought with them.

There were about two-dozen groups playing. The groups not only filled the square in the center of town, but also the adjacent park and the covered porches of stores and homes, some of which had signs saying, “Pickers Welcome.” 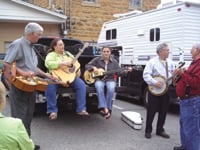 Bluegrass enthusiasts and any musician worth his or her finger pick will know I was in Mountain View, Arkansas. “Pickin’ in the Square” is a tradition 150 years old.

No one officially “performs,” not even top professionals, who show up here fairly often. No one puts out hats or instrument cases to collect tips. Mountain View is for jamming for the pure love of music, and musicians leave their egos at home.

Mountain View is in the Ozarks, the heart of hillbilly country. There, bluegrass has thrived since the original settlers came to eke out a living on hardscrabble farms.

Just a couple of hours’ drive from artsy, self-aware Eureka Springs, Mountain View is a world away. It does not put on airs, only sings them. The people are extraordinarily friendly and instead of considering visitors as money-bearing tourists, in Mountain View they just figure you’re there to join in the music.

“And he cannot be trusted with love,” sang a woman. 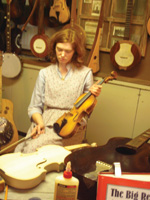 I noticed that one of the men in the lawn chairs listening to the tunes was whittling a piece of wood. I asked what he was making.

He grinned at me and pointed to the ground. “Shavings.”

We shared a laugh.

Mountain View is well-loved. Musicians show up from all over the country to jam with one another. None of the musical instruments are amplified so the groups can be fairly close without interfering with each other.

I also noticed all the instruments sprouted little digital tuners. No longer do groups have to sit for ages tuning to one another. They all know they are in tune, and a musician can jump right in to the middle of a jam without throwing anyone off. Technology plus bluegrass equals uninterrupted jamming.

This was an ordinary Wednesday night in the spring. The weather was warm, not hot, but cloudy.

“If it should start to rain, I got a building a couple blocks from here where we can keep playing,” offered one of locals sitting in with a guitar, inviting strangers to his property.

Since the rain was holding off, I wandered to another group that had made themselves comfortable on the tailgate of a pickup truck beside the square. They were top-notch musicians and played together seamlessly.

“Are you related?” I asked between songs.

“Oh, no. But we meet here every year to play while we are on vacation,” a woman said. She was from California, another woman from North Carolina, and the Dobro player was a sheriff’s deputy from Mississippi. They had all just arrived that afternoon and clearly loved pickin’ together.

No one gives lessons on the square. Young people are welcomed into groups to jam and can pick up tips by watching and listening, but the place to learn to play is in a class at the Ozark Folk Center outside town. Townspeople worked with the state to create the center. It opened as a state park in 1973, providing instant employment for people with skills that were dying out. Suddenly, the dulcimer makers, blacksmiths, candle makers, soap makers and quilters found themselves in demand. Even the old moonshiners came to build a still—but it’s for demonstration purposes only. Stone County is a dry county. (And while I wondered about the water bottles some of the old-timers carried around, there is no beer to be had anywhere in town except in private homes.)

The folk center offers demonstrations of everything from banjo playing to whittling. It also rents cabins and has a restaurant serving such traditional fare as fried chicken and corn pone.

The Folk Center draws those curious about the hillbilly way of life from all over the world. But the chance to go pickin’ in the square or just to listen and share in the love of music is what lures most people to quiet, unpretentious Mountain View, the jewel of the Ozarks.

Andrea Granahan is a writer who lives in Bodega, California.

IF YOU GO:
Billed as the Folk Music Capital of the World, Mountain View is near the Ozark National Forest in the northern part of Arkansas.

Special events include the Arkansas Folk Festival in April and bluegrass festivals in March and November.

Among the restaurants, Country Time offers homemade biscuits and incredible pies, and Tommy’s Famous is popular for pizzas, which are very good, but the barbecue is absolutely memorable.