You are here: Home / Great RVing Destinations / See The Remains Of This Abandoned Nevada Ghost Town
This post may contain affiliate links or mention our own products, please check out our disclosure policy here.

Awhile back I shared a post on Wilson Canyon Rest Area in Nevada. The reason my wife and I chose this location was we needed a base camp to explore the nearby ghost town of Pine Grove. 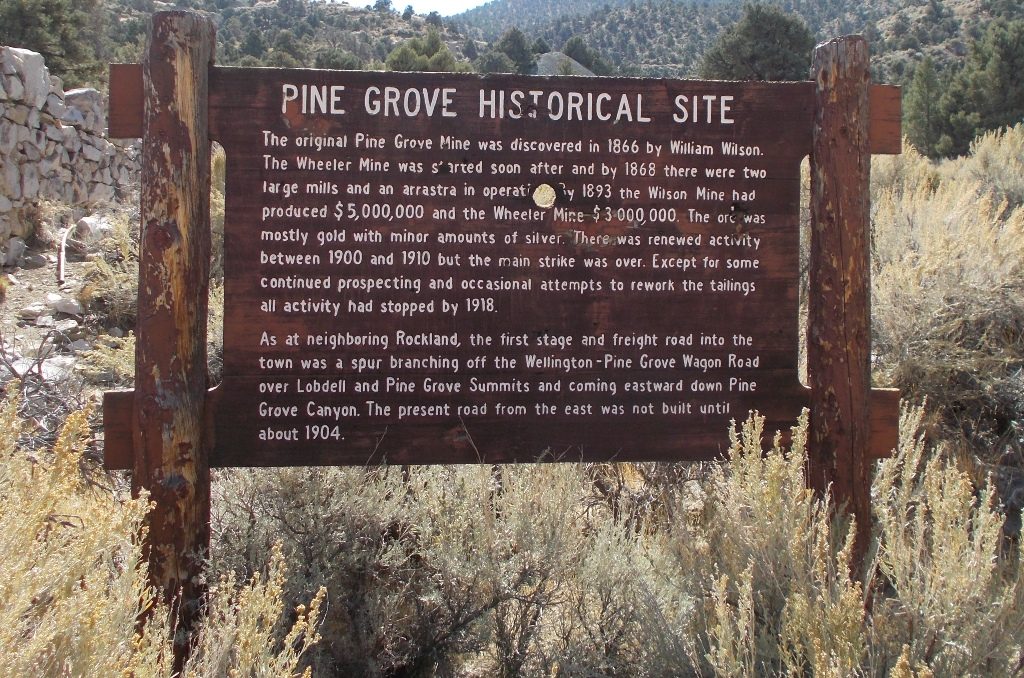 Gold was discovered at what would become known as Pine Grove in 1866 by William Wilson. By the summer of the same year, the area was inundated with eager prospectors hoping to strike it rich. The mining settlement was initially named Wilsonville but was later changed to Pine Grove by 1868.

By this time the community had a post office, a weekly newspaper, along with a population of approximately 200 hardy souls. Two steam-powered stamp mills and three arrastras were used to crush and process the ore, which also ran high in silver content. 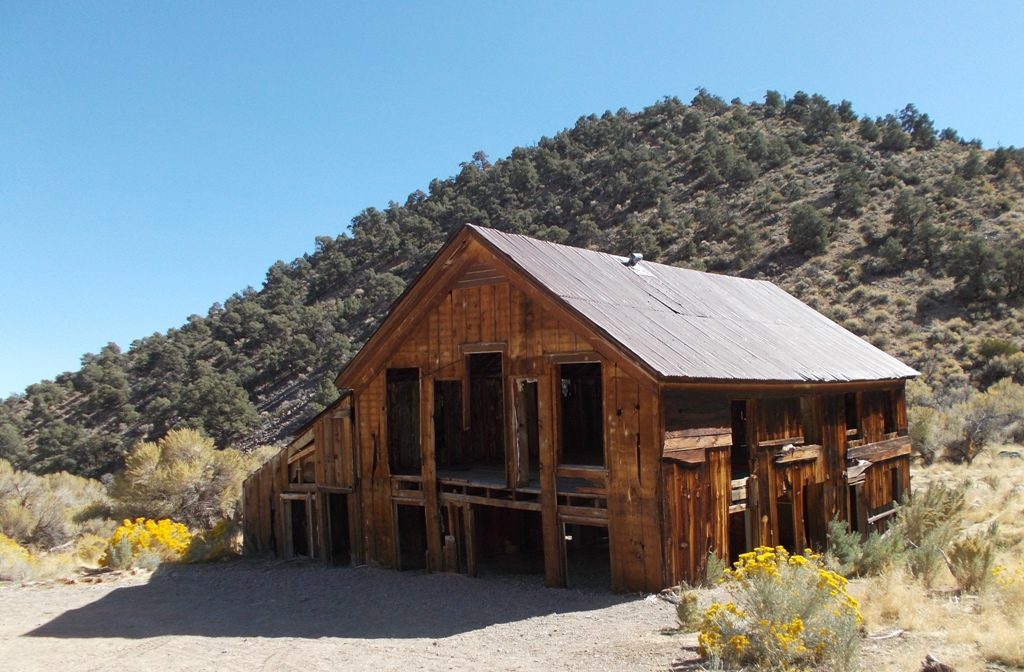 By the 1870s the population had grown to 600 residents and is reported to have contained three hotels, five saloons, a general store or two, an office containing a Wells Fargo agent, dance hall, barber shops, blacksmith, school, livery stables, and two doctors.

By the late 1880s the Wilson and Wheeler Mines, the two largest producers, were turning out a combined weekly total of $10,000 in gold and silver bullion.

With the passage of the Sherman Silver Act and the resulting financial panic of 1893, the mines became unprofitable, closed, and were only worked intermittently until 1918. By then the majority of residents and shopkeepers had already abandoned Pine Grove, leaving it a ghost town.

Current remains include a partial stamp mill, a hotel, a garage (possibly a lively stable), stone walls of a retail establishment and other structures. 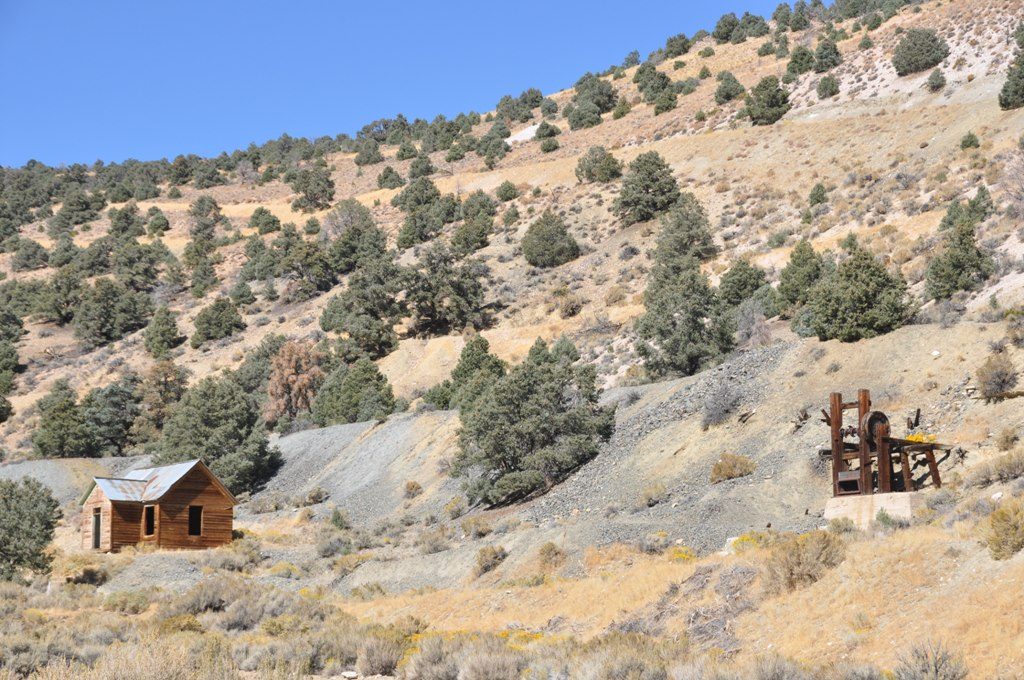 First thing when visiting is to find somewhere to leave the RV, as the last section of road to Pine Grove is not suitable for RVs.

As mentioned at the beginning of this article, you can camp stream-side at Wilson Canyon Rest Area.

Alternately you can camp at the Log Cabin Rest Area off Highway 339 near Yerrington, Nevada. There is no charge to stay the night at the rest area and it also offers a free dump station and potable water. You will find the rest area on the east side of Highway 339, about a quarter mile south of the intersection of Highway 95 and Hwy 95A. The coordinates are N38° 59.383 W119°10.921.

If you will be making a quick day trip to the site and just need a spot to drop the RV while you visit Pine Grove in your tow vehicle or dinghy, there is a spot a couple hundred yards in on the left of Pine Grove Road after you cross the irrigation canal which is BLM and state DOT land. 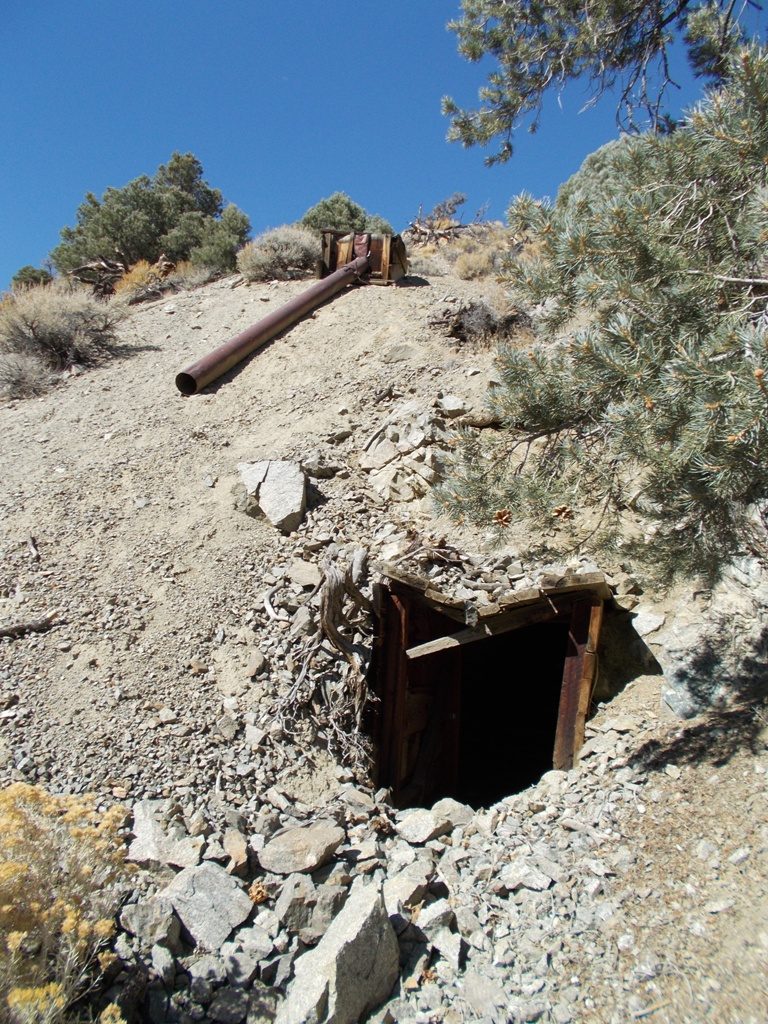 An old mine in the hills above Pine Grove

Follow wide and well graveled Pine Grove Road southeast until you reach National Forest Road #059 (not signed at the time of my visit) at N38° 42.814 W119° 03.022.  If you choose to drive your RV this far, there is a large area to park southwest of the intersection.

Note about halfway to Pine Grove you will encounter a split in the road. The split to the right bypasses a rather steep section of NF #059 and an eroded section of road that could be a problem for longer wheel based or two-wheel drive vehicles. A high clearance vehicle is recommended for the section of road between Pine Grove and Pine Grove Road.

Exploring the 100-year-old ghostly remains of Pine Grove, just another adventure in RVing!