You are here: Home / Top Stories / Praying Trees and Jumbled Rocks
This post may contain affiliate links or mention our own products, please check out our disclosure policy here. 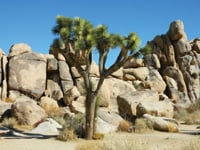 Near Palm Springs in Southern California, two deserts with ecosystems that differ primarily because of elevation come together to form a bizarre landscape.  The Mojave Desert and the lower-elevation Colorado Desert meet at Joshua Tree National Park. Viewed from outside, the park looks like the rest of the surrounding desert, but a drive inside reveals a fascinating variety of rock formations.

The area was named by mid-19th century Mormon immigrants who thought its Yucca trees resembled the biblical figure of Joshua with arms outstretched in prayer. Although the park is named after these weird-looking trees, the rocks are the real attraction. The most unusual sites are giant mounds of rocks with interesting features that appear to rise out of the desert floor, which is exactly how they were created—the result of ancient volcanic activity.

Geologists believe the landscape was born more than 100 million years ago. Molten liquid, heated by the continuous movement of the earth’s crust, oozed upward and cooled while still below the surface of the overlying rock.  After years of climate change, erosion, volcanic eruptions, savage floods and shifting tectonic plates, the land was chiseled into jagged cliffs, boulders caught in the balance, and tilting rock piles. The result is a paradise for rock climbers and a geological wonder for sightseers. 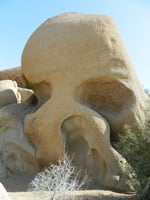 The cracks and folds nature sculpted in the rocks, along with the rough textures and warm, sunny conditions, make Joshua Tree a very climbable place.  When other climbing hotspots are covered in snow, climbers come from far and wide to scale these rocks. More than 5,000 climbing routes are marked within the park, and additional routes are being discovered.

The most interesting rock formations and many other points of interest can be found on the first 18 miles of a 25-mile loop that begins at the park’s west entrance. The road contains many pullouts to stop and take a longer look at things, and there are also many wayside exhibits that explain the plants, animals and geological features of the desert.  On this route you can also find several areas with picnic tables and restrooms where you can stop, have a snack and explore the high desert.

This road passes Hidden Valley, a one-mile trail that starts at the picnic area and winds among massive boulders through a legendary cattle rustler’s hideout. A few miles down the road you’ll find a three-mile trail to Ryan Mountain. The 5,000-foot summit has lookout points with marvelous views of points south.

A bit farther down the road is Jumbo Rocks, where you will find the fabled skull rock, a huge rock that resembles a ghostly skull, and several other interesting formations with some of the largest rocks in the park.

Joshua Tree has gained international attention as a superb rock-climbing area and many visitors enjoy watching rock climbers in action.

Just after you exit the park at the north entrance station, you’ll see the Oasis of Mara, where the park’s first inhabitants, Native Americans, lived.  In the 1800s, prospectors arrived, followed by homesteaders.  Today the oasis is home to the park headquarters.

Many like to veer off Park Boulevard and take a 20-minute drive south to Keys View.  On a clear day you can see beyond the Salton Sea all the way to Mexico from the 5,000-foot summit. Scenic nature trails range in length from a quarter mile to nearly two miles.  There are also hiking trails that are as short as three miles and one that is 16 miles.

Campers can select from nine campgrounds in the park. However RVs cannot exceed 25 feet, and there are no hookups.

One last bit of advice is to pay attention to the weather forecasts. This is a land of extreme weather. While winters can get below freezing, summer heat can easily exceed 100 degrees early in the morning.  Temperature changes of 40 degrees in 24 hours are common, so bring a variety of clothes you can layer on and off as conditions change.

Before retiring in 2006, Doug Imberi operated the public affairs office at a military distribution center in Tracy, California. He lives in Salida, California, when not traveling in his fifth wheel with his wife and two mini dachshunds.