You are here: Home / Top Stories / Preserving Tribal Culture
This post may contain affiliate links or mention our own products, please check out our disclosure policy here.

The center is named for the large village of Hibulb that was at the end of a bluff overlooking Puget Sound. Warriors who lived in longhouses at Hibulb protected their people from invasion of their territories. From Hibulb, they could see enemies approaching from a long distance and they would light a huge signal fire to warn the other villages and longhouses across the bay and up the Snohomish River.

Tulalip Tribes, known as the People of the Salmon, are the federally recognized descendants of the Duwamish, Snohomish, Snoqualmie, Skagit, Suiattle, Samish and Stillaguamish tribes. The 22,000-acre Tulalip reservation was established in 1855 by a treaty that guaranteed hunting and fishing rights to all tribes represented by the signers. In return for the reservation and other benefits promised by the United States government, the Duwamish Tribe exchanged over 54,000 acres of their homeland, including a large chunk of modern-day Seattle and King County.

Today the Tulalip Reservation is thriving with businesses that serve more than 6 million visitors a year, and it is one of the largest employers in Snohomish County.

The Hibulb Cultural Center, which opened in 2011, is located on a 50-acre natural history preserve. The 23,000-square-foot structure features a main exhibit, a revolving temporary exhibit, two classrooms, a longhouse, a research library and a gift shop. For visitors, the center serves as an introduction to the Northwest tribes, their culture and history.

The exhibits may be viewed on a self-guided tour, but we had the pleasure of joining a group guided by Lois, a tribal member who is knowledgeable and informative. We met first in the cedar longhouse that is built into the museum. I learned that not all Indians were teepee dwellers. The Tulalip peoples lived in longhouses, each of which might house 14 to 20 families. Tribal meetings were held in the longhouses and even today the longhouse serves as an important center where teachings and traditions are passed from generation to generation.

The Tulalip have a binding relationship to cedar and salmon. At the center, visitors learn how weaving, fishing and cooking defined their culture. The cedar tree is considered a gift to serve throughout one’s life. Every part of the tree is used with nothing wasted. It is a perfect resource, providing everything from baskets, bowls, cloth, and canoes, to long-lasting carvings. 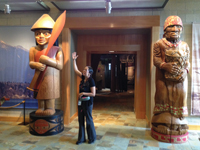 The Tulalip are a fishing people. The cultural center has a display showing fishing gear, traps and techniques. Also shown is a “summer house” where people lived while fishing, hunting, gathering berries, etc.

Formal education began at Tulalip in 1857 with a Catholic priest, Father Chirouse, who taught English, reading, spelling, history and math. He also was a student of theirs as he learned to speak one of the local dialects, Lushootseed. Father Chirouse was revered by the Tulalip people and later became an Indian agent and the voice of the people.

A sad period in the history of the Tulalip, as well as many Indian tribes, is when, in the 1800s, the U.S. government required all native children to leave their homes and stay in boarding schools. In an attempt to “civilize” the children, they were forbidden to speak their native language, practice their own religion and beliefs, or wear their accustomed clothing. The children were allowed little contact with their own families. Father Chirouse’s school was closed and replaced by a more military-style education. The result of total immersion into the white man’s world caused the old customs and native languages to become nearly extinct. 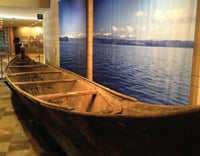 At the cultural center, walls are decorated with small plaques of men and women who served in the United States Armed Forces. Each wall acknowledges a particular war or period served. The Tulalip Tribes Veteran’s Department has combined forces with other veteran programs to provide services for returning warriors.

A special exhibit, Coast Salish Canoes, will be on display until June, giving visitors an opportunity to learn about canoe carvers and different types of canoes. The exhibit shows canoe travel routes in Puget Sound and traditional canoe-based gatherings ranging from canoe races to festivals and journeys.

Plan on spending some time at Hibulb Cultural Center. Although it can be self-guided, I recommend joining a guided tour. The short stories and anecdotes are fascinating and informative. To learn more about the center, visit hibulbculturalcenter.org.

Mary E. Trimble is a writer who lives in Camano Island, Washington. She is the author of several books that can be found at marytrimblebooks.com.