You are here: Home / Blog / Quality Neighborhoods in the Full-Timer’s Universe
This post may contain affiliate links or mention our own products, please check out our disclosure policy here. 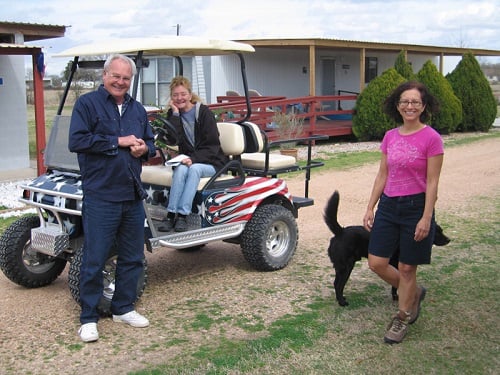 I dare you: walk around any typical suburban neighborhood at 7:30 am on a weekday and say hello to a stranger who’s headed out to work. There’s a 50/50 chance that the recipient of your attention will at best mutter a greeting back to you without making eye contact – and at worst, report you as a suspicious person to the authorities.

Now, do the same thing in any typical fulltime RVer’s gathering spot like Quartzsite. Try this experiment in the morning when you see a stranger walking out the door to take her Terrier on walk. Can you guess what will happen? It’s a safe bet that your subject will stop to chat and 30 minutes later you’ll have an invitation to join her at bingo.

RVers have a reputation for being some of the friendliest people on the planet but do you ever wonder why? Not all of us are retired, so you can’t say it’s because fulltime RVers don’t have to work anymore. So is it because we share a common bond of dump station disasters and awning mishaps? Maybe. Clearly we’re not all alike and other than RVing, we usually don’t share that much in common. So what is the magic that makes nomadic people so willing to stop and chat with others, while those folks who live in the same stick house for decades hardly know the names of their neighbors? Last night while chatting around the campfire with another traveler, I think we figured it out.

Fulltime RVing “neighborhoods,” whether they’re permanent or temporary, are filled with people who choose quality of life over quantity. It doesn’t matter whether someone lives in a 40′ bus or a 1987 van conversion, or whether they live in that machine all year or just part time; fulltimers stop and acknowledge one another because we live with less and aren’t burdened with the endless act of gathering and paying for stuff. Not being overly consumed by keeping up with the rat race, we have created extra space in our lives that gives us more time and mental space for letting in and embracing the unexpected.

I know this sounds a little wu-wu but hear me out. When you’re running the rat race and keeping up with the Joneses, you’re so enslaved to jobs that enable you to pay for your prestigious possessions that you don’t have one extra minute to stop and chat with a stranger. Time is money, money is time, and like the Alice in Wonderland rabbit who constantly watches the giant pocket watch, you’re late late late for everything that gets you nothing in return – especially when it comes to quality of life. By not saying hello to a stranger, you never know what kind of interesting day you could have had.

I’m not encouraging anyone to ditch their belongings and live a life of spartan existence. But what I am saying is that people who choose to live with a little less than what modern American considers the “norm” really do seem to be having a better time enjoying life than those who continuously chase down their happiness through possessions and money.

And with that said, the sun is setting and it’s now happy hour. Cheers to fulltime RVing!