You are here: Home / Blog / Quartz Hill
This post may contain affiliate links or mention our own products, please check out our disclosure policy here. 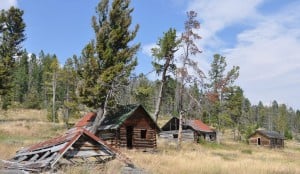 In the last installment we reviewed places to set up camp in preparation of exploring the history along Quartz Hill Road. Starting at the Dewey, MT. end of Quartz Hill Road, your travels will take you past the Dewey Cemetery, the mining camp of Quartz Hill, surrounding mines and connect you with Vipond Park, which was mentioned in an entry a couple weeks ago. Even the road itself is historic as the narrative below will reveal.

The first mining claim in the Quartz Hill area was located by John Vipond in April of 1868. Additional prospecting resulted in more claims being filed and the need for a good road to transport supplies and ore. During this time the town of Dewey developed along the Big Hole River at the base of the drainage leading up to Quartz Hill. In order to get ore to the smelters, the miners built Quartz Hill Road from the mines down the canyon to Dewey. As a result of being located at the receiving end of Quartz Hill Road, Dewey thrived as a supply and milling center for the mines. 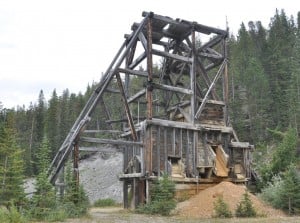 The most productive mine in the Quartz Hill area was the Lone Pine, which was located in the late 1870s. In 1891 it was sold to an English syndicate for the handsome sum of $725,000. The new owners installed a 25-stamp mill and a concentrating plant at the mine which produced $33,000 in silver monthly in addition to smaller amounts of lead, zinc and copper. The first boom ended in 1895 when low silver prices and a depletion of good ore forced the mines to close. In 1928 the Quartz Hill Mining Company bought the properties and reopened the mine when a new ore body was discovered a few hundred feet southwest of the original Lone Pine vein. This new discovery was called the West Lone Pine and was a steady silver producer from 1933 to 1950. The buildings you will see during your visit to Quartz Hill are from this period.

Although most of the Quartz Hill’s production came from the Lone Pine mine, there were a number of other mines which contributed. The Aurora Mine produced 663 tons of ore from 1933 to 1936 from workings located about 1/2-mile northwest of the West Lone Pine mine. Another significant producer was the Monte Cristo Mine, located about 1.25 miles north of the Lone Pine, which produced 19,872 ounces of silver. Ruins of both mines remain with the most interesting being located at the Monte Cristo. The still-standing multi-compartmented ore box at the Monte Cristo is made of logs rather than sawn lumber typical of such structures. 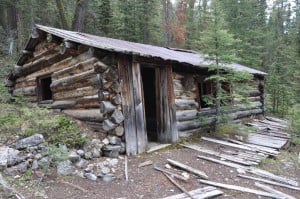 Cabin at the Monte Cristo Mine

The most adventurous part of our visit was riding motorcycles and an ATV up the mountain from our camp at the Valley of the Flies (see last week’s entry). As Montana doesn’t have helmet laws, we had little protection from the thousands of flies along the way at lower elevations. Being speckled with bug parts at 30 miles a hour, just another adventure in RVing!

While the town of Dewey is not very ghostly as ghost towns go, the true ghosts of Dewey reside in the cemetery, which you will find along Quartz Hill Road at: N45° 46.235 W112° 51.775 A stroll among the headstones of Dewey’s former residents will reveal much about the past of this now-quiet town.

Continue up Quartz Hill Road for about five miles to: N45° 42.945 W112° 53.915 which will bring you to the remains of the Lone Pine mine on your left and the homes of the last miners on your right.

Quartz Hill Road is suitable for most two wheel drive vehicles. The unnamed road to the Monte Cristo Mine is a bit rougher and narrower requiring higher clearance.