You are here: Home / Top Stories / Quartzsite—A Boondocker’s Paradise
This post may contain affiliate links or mention our own products, please check out our disclosure policy here. 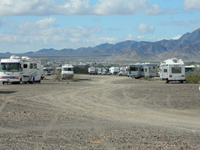 When temperatures start turning icy across the U.S., thousands of snowbirds flock to the Southwest desert of Arizona.  Along Interstate 10, about 20 miles from the California state line, a city about the population of Atlanta erupts like an old west boomtown amid the desert sand, rocks, sagebrush and cactus. RVers come from all parts of the U.S. and Canada to enjoy the warm, dry temperatures and camp on public land at no cost courtesy of the Bureau of Land Management.

Located 85 miles north of Yuma, Quartzsite swells from a summertime population of a few hundred to sometimes nearly a half million, due mainly to the weather.  While summertime high temperatures average well over 100 degrees, the mercury hovers near the 70-degree mark in the winter.

The Chamber of Commerce calls it “Snowbird Haven” and a “Gathering Place.”

“We have over 70 RV parks,” pointed out Cee Carnevale, a volunteer at the Quartzsite Visitors Center. “But that could never accommodate all the people that come here in the winter.” The BLM offer miles of free camping close to town. 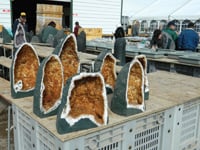 Not only do vacationers flock to Quartzsite for the weather, from October to March, but vendors also make up a significant population, and they will sell you anything you can think of, from antiques to zebra statues. It’s been called the world’s largest flea market, and nobody would argue that.

“It used to be just rocks and gems,” said Carnevale, who moved to Q-town 20 years ago from Boston.  “But now you have everything.”

I bought obscure parts for my old fifth-wheel, cotton socks made in Alabama, sun visors covered with fake hair to shield my bald head from the winter sun, a stained glass window and countless other items.

Not all the stuff is new. You can find plenty of antiques and collectibles spread out on tables all over the place. If it was ever made, chances are pretty good you could find it here. Need a gun permit?  You can go to a three-hour class, pay $200 and walk away with a concealed firearm permit recognized in 37 states. How about getting Fido’s teeth cleaned?  There’s a service that will clean your dog’s teeth without anesthesia for $100.  What about some emu oil for pain relief and skin moisturizing?  You can get it all at the flea markets.

There are also major league swap meets and shows featuring rocks and gems, RVs, arts and crafts, and classic and custom cars. 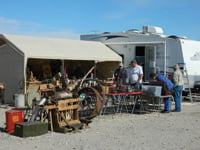 The flea markets in Quartzsite go back to the mid-1800s when cowboys, prospectors, miners and Indians came to town to trade goods. During the same time period, a stagecoach station served travelers making the trek across the desert, and the Army experimented with using camels instead of mules to pack supplies over the desert. So the town has always offered something to support those passing through.

The level of support to modern day travelers has really increased.  Several industries have sprung up to support RVers boondocking in the desert.  The first day we arrived at the BLM’s Scaddan Wash site, located about three miles east of Q-town, we looked out the window to see who was honking their horn when we saw the Schwan truck driver signaling campers he was selling frozen goodies. Should you need your wastewater drained, the RV Proctologist is only a phone call away.

I asked my neighbor how in the world they could find you out here. “They’ll find you,” said the veteran of many winter camps here.  “They know this area pretty good, and with a cellphone they can call when they get close and you can flag them down.”

Some campers come to Quartzsite to rendezvous with a group. Imaginative markers signal the way to group campsites.  Some use red plastic solo cups or pink ribbons; other will write their name on paper plates, and one unusual symbol we saw was a cowboy boot painted yellow, hanging from a cactus.  A lot of the smaller groups will circle their coaches and have a big campfire in the middle, like back in the days when horses and mules pulled wooden wagons along dusty trails.

Today’s travelers have the luxury of relaxing in folding chairs, pouring their favorite drinks and enjoying the sunsets. The skies turn beautiful shades of blue, purple and orange framed through billows of clouds that change from white cotton balls into dark blotches as the sun slips over the mountains. Soon the warm, dry air turns crisp and cool and several fires start popping up amid the camps. 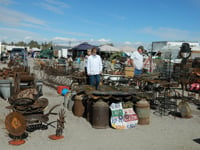 The BLM grounds make terrific campsites for those who want to enjoy the desert and Q-town. The grounds are your typical desert setting—sand, dirt, rocks and mostly flat, with shrubs popping up here and there. I could not believe how clean these public grounds were. Absolutely no trash. Campers were more concerned with keeping the desert clean than were the managers of some of the campgrounds we paid to stay in, which brings us to the best part of camping on publicly owned desert.  You can stay for 14 days free of charge, and there are four 14-day sites within a five-mile radius of town.  After 14 days, the BLM requires you to move 25 miles away or to a Long Term Visitor Area, which will cost you between $40 and $180 for up to six months with water, sewage and trash removal.

Before retiring in 2006, Doug Imberi operated the public affairs office at a military distribution center in Tracy, California. He is an award-winning home brewer, and lives in Salida, California, when not traveling in his fifth wheel with his wife and two mini dachshunds.