You are here: Home / Blog / The Range Bucket List: A Must-Read For Golf Lovers
This post may contain affiliate links or mention our own products, please check out our disclosure policy here. 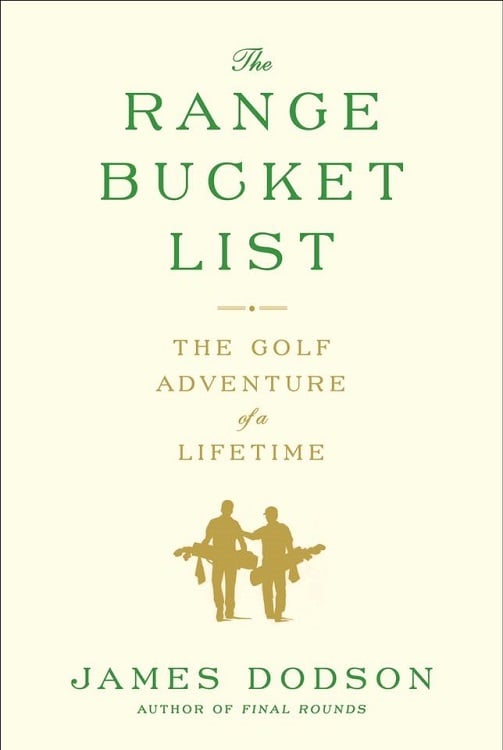 Veteran golf writer James Dodson has just released his latest book, The Range Bucket List: The Golf Adventure of a Lifetime. A two-time winner of the United States Golf Association’s Herbert Warren Wind Award for “Best Golf Book Of The Year”, Dobson found the inspiration for the book when he rediscovered a list written to himself when he was just 13 years old.

That list was written more than five decades ago and was titled “Things to Do in Golf”. It included the golfing aspirations of a young boy who had no idea where life would take him. The author rediscovered the piece of paper in an old trunk. Realizing that he had yet to achieve many of his thirteen-year-old dreams, Dodson pondered the things he’d add to the list if he wrote it today. He subsequently expanded the list into a golfing “bucket list” of the people and places he had yet to meet and see in the golf world.

In this tribute to the game he loves, Dodson takes readers on a journey around the world and into the lives of characters large and small. It includes vignettes like the interesting lunch with Donald Trump, rounds of golf with John Updike, intimate conversations with Arnold Palmer, scoring a memorable 13 on a hole at St. Andrews, and revealing the real reason The Masters has always been broadcast on CBS.

“The Range Bucket List” is simultaneously an exhilarating armchair adventure and one man’s love letter to a game that has fundamentally shaped him and his life, filled with unforgettable characters, untold history, and lots of heart. Here’s an excerpt from the book:

Since I’m the son of an incurable optimist who believed that golf provides the best opportunities for competitive fun and friendship in a complex world, I’ve always felt the game to be about its remarkable people, places, and traditions far more than a good score on the card. I have an abiding passion for old clubhouses and vintage courses, as well as the deep friendships and diverse landscapes that have enriched my own peculiar golf IQ, along with the game’s incomparable history of colorful characters and assorted heroes and rogues, all linked by an incurable addiction to chasing a tiny ball all over God’s green earth, discovering whatever adventure lies just around the next dogleg.”

“The Range Bucket List: The Golf Adventure of a Lifetime” is published by Simon & Schuster and retails for about $18 on Amazon here.