You are here: Home / Blog / Ride the Astoria Riverfront Trolley
This post may contain affiliate links or mention our own products, please check out our disclosure policy here. 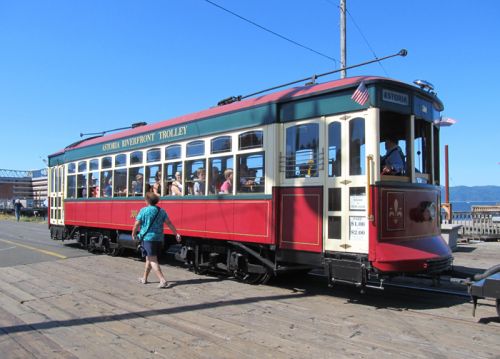 Astoria, Oregon offers many attractions, but to really get to know this picturesque maritime community, don’t miss a stroll or a ride along its waterfront. Since the city built the 5.1-mile Astoria Riverwalk through downtown and on the waterfront, it’s become the best way to enjoy some of the same Columbia River sites and scenery that both early explorers and modern-day travelers have stopped to admire. Derelict buildings (left over from Astoria’s days as the salmon canning capital of the world) and rotting piers have been replaced with a flat asphalt trail, pocket parks, benches, a maritime memorial, overlooks, great restaurants, and shopping.

If you don’t want to walk or bike the entire length, board “Old 300” instead; it runs right alongside the trail. For just $1 you’ll enjoy a ride in a beautifully refurbished 1913 streetcar— stay on for as long or as short a trip as you’d like or pay $2 to hop on and off all day long. Knowledgeable conductors and motormen narrate the journey, so it’s a great way to learn about Astoria’s 200+ years of history in just an hour. Don’t be shy about asking questions! Along the route, you’ll get a good view of the Astoria-Megler Bridge, considered to be the longest three-span truss bridge in the world. There’s a trolley stop at the Columbia River Maritime Museum, and another big draw are the sea lions at the far eastern end of the trail. You’ll hear their bark long before you see them sunning themselves out on the docks. There are nine official stops in total along the route. 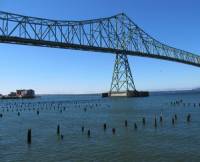 The detailed woodwork inside Old 300 is especially beautiful. The car was built in 1913 by the American Car Company of St. Louis, Missouri for the San Antonio Traction Company in Texas. Streetcar service in San Antonio officially ended 1933, and following that the trolley was left outside where it deteriorated for decades. Eventually the trolley wound up in the Pacific Northwest, and an all-volunteer group of Astoria residents raised thousands of dollars and restored the Old 300. Tourists and locals alike are lucky she is back in service. All aboard!