You are here: Home / Top Stories / Riding the Rails to Yesteryear
This post may contain affiliate links or mention our own products, please check out our disclosure policy here.

In high anticipation, we gathered at the Mount Rainier Scenic Railroad depot in Elbe, Washington for a ride on the longest continuously operating steam train in the Northwest. With a mournful whistle, a steam engine pulling four cars click-clacked its way toward us.

The Mount Rainier Scenic Railroad is a big attraction at this tiny town, named by German immigrants for the Elbe River Valley in Germany. We had our choice of seating, and our family of six adults chose the last of four cars, which happened to have windows with no glass, the better choice to hang out to take pictures. Some cars had glass windows. We sat on bench seats; the car before us had tables, much like a dining car.

Bill, our conductor, made his career on trains for 41 years and in his retirement volunteers with the railroad. He coached us to signal the engineer that it was safe to move the train forward, a signal known as “High Ball” followed by the train’s engine number. Together we yelled “High Ball 17!” and the train’s whistle immediately responded and with a blast of steam, we were on our way.

A train’s whistle, originally referred to as a steam trumpet, is an efficient means of non-verbal communication and each cadence has its own meaning. One whistle indicates the train is ready to go. When we passed a crossing, we heard two long, one short, and one long cadence; other times it blew a greeting as we passed various landmarks. The gentle swaying of our bench seats and the nostalgic whistle made me think of what traveling 100 years ago must have been like. Sitting by the window, I often felt the spray of steam condensation. 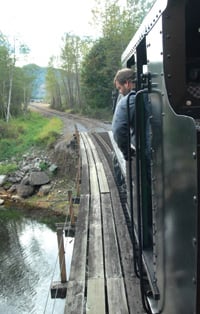 The train’s maximum speed is about 10 miles per hour, giving us plenty of time to see a few backyards, and then look at wide-open spaces with grazing cattle and horses, meadows, a spectacular beaver dam, and mountain streams, cloudy with glacier runoff.  At one point we were on a trestle, high in the air.

As we climbed a grade, our sturdy little train chugged what sounded to me like, “I think I can, I think I can.” As we traveled Mount Rainier’s forests and foothills in October, we viewed fall’s colorful changing leaves, mixed with brilliant green conifers. At one point, as we crossed the Upper Nisqually River, we got a peek of the great mountain, its top capped with clouds.

We pulled into the small, unincorporated community of Mineral for a museum visit. Mineral began as a mining town, and then turned into a logging camp with a sawmill, no longer in operation. Today Mineral claims to have the most comprehensive collection of steam logging locomotives in the world. The excursion schedule allowed 45 minutes to visit the exhibits. A gift shop offered railroad memorabilia, and a small concession provided light snacks and beverages. Some people brought lunches and sat at picnic tables situated throughout the railroad camp.

When our conductor learned I was a writer, he invited my husband, Bruce, and me to visit Engine 17’s cab. It was a high step, plus three more steps up to a space filled with boilers and the machinery needed to pull the train. A blast of heat—about 110 degrees—made me appreciate the work of an engineer. We were told that on a hot day the engine cab could climb to 140 degrees. No wonder we often see an engineer leaning out a window!

A two-foot wide walkway the width of the train gave access to two pressure gauges and about 30 valve handles. Rather than wood or coal used in the old days, this steam engine is fueled by diesel, and a large fuel tank is also in the engine cab. There are no ready-made parts for this American Locomotive Company Engine 17, originally built in 1929. In its renovation, all parts had to be machined from scratch out of blocks of steel. The rebuilt engine has been in use for about 1,500 hours.

The excursion takes about two hours. We rounded out our day with a late lunch in Elbe at the Mount Rainier Railroad Dining Company, an old train that has been turned into a restaurant. We enjoyed our meal and our group of six had a dining room to ourselves. There are other eating choices either in Elbe or close-by communities.

During December, the Mount Rainier Scenic Railroad conducts Santa Express train rides on Saturdays and Sundays, with the last trip scheduled December 22. You can make reservations and find more information about the railroad and the museum at mrsr.com or by calling (360) 569-7959.

Mary E. Trimble is a writer who lives in Camano Island, Washington.