You are here: Home / Top Stories / Rise and Fall of the Mighty Argo
This post may contain affiliate links or mention our own products, please check out our disclosure policy here. 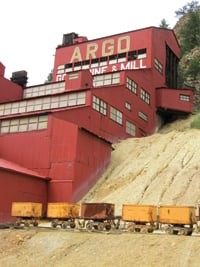 The Argo Gold Mill and Tunnel in Idaho Springs, Colorado, made quite an impact on the state’s mining history. From its completion in 1913 until a fatal accident 30 years later, many miners were able to strike it rich thanks to the technology and efficiency provided by the mill and the tunnel. The best way to learn about this significant time in the Centennial State’s past is to visit the Argo Gold Mine and Mill, now a national historic site.

Renovated and opened to the public in 1978 as an educational tour, the site has retained most of the original equipment used for processing gold ore. A visit includes a self-guided tour of the Double Eagle gold mine, and a gold panning lesson. But the main attraction here is not a mine tour, but rather a mill tour with a history lesson thrown in. The bottom level of the five-story mill serves as a museum filled with mining relics and interesting old photographs.

Your tour kicks off with a presentation by a member of the Argo staff. You’ll not only learn the history of the Argo Mill and the Argo Tunnel, but also the difference between placer mining and hard rock mining, and how and why it all got started on this spot over a century ago. During the talk, samples of gold and gems found in the local mines are passed around the room. A film brings the Argo’s story to life, as does a demonstration of a very loud pneumatic drill.

Following the noisy drill demo, a short bus ride up the hill takes you to the 1890 Double Eagle gold mine (on the same level as the top of the five-story mill), where the self-guided portion of your tour begins.  At the top, you’re on your own to explore a short section of gold mine, and then walk downhill through the various levels of the mill. Inside the mill, you’ll encounter narrow stairs with uneven treads, loose floorboards, and shaky handrails, so watch your step and your children. Interpretive signs rather than a tour guide help explain how the mill and much of its machinery once operated. 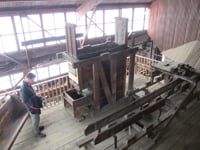 The Argo’s story began with the discovery of placer gold in Idaho Springs, at what is now the confluence of Chicago Creek and Clear Creek. George Jackson was responsible for this first major find in 1859, which set off Colorado’s Gold Rush. Good news traveled fast, and practically overnight 50,000 gold-seekers streamed into Clear Creek Canyon. After a couple of decades, the easy placer gold in the streams gave out and lode mining replaced panning and sluicing. At least 100 hard rock mines—the Orr, Queen, Sunnyside, Bertha, Arizona, Saratoga and many, many more—were worked between Idaho Springs and Central City, a distance of a little more than four miles. As the shafts were sunk ever deeper into Quartz Hill and the Seaton and Pewabic mountains, the mines filled with water. As the mines reached depths of 500 and 1,000 feet, pumping costs made up the bulk of the mining expense, and soon enough, mines that could have continued to produce were closed. Prospectors just couldn’t stay ahead of the rising water or the rising costs. 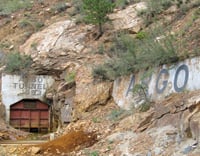 The solution to the water problem was to build a tunnel that would run horizontally below the vertical mine shafts. The tunnel would not only act as a drainage system, but also provide ventilation and transportation of the ore to a processing mill. The project was started in 1893 thanks to Samuel Newhouse and his investors, and was the most ambitious and costly mining venture ever undertaken at the time. But it proved worth the risk. Drilling and construction continued for 17 years, and by 1910 the Argo Tunnel ran from the east end of Idaho Springs to the northwest corner of Central City. Along the 4.16-mile route, it intersected directly or by crosscut tunnels to an estimated 100 mines. The tunnel was built on a slight grade to allow water to flow in a flume out to the portal. The first two and a half miles of the tunnel were 12 feet wide with a double track. Beyond that, the width of the tunnel decreased to 10 feet allowing for a single track. The combined benefits of drainage without pumping and the ability to haul ore to a mill at the tunnel’s portal allowed mines that had been closed for years to reopen.

In 1913, soon after the Argo Tunnel was in operation, the Argo Mill was completed. The most up-to-date milling processes were incorporated to ensure the highest percentage of precious metals recovery. During its three-decade lifetime, the mill processed over $100 million of gold ore. Electric locomotives were used to haul three-ton ore cars to the mill. Each mine that shipped ore to the Argo Mill through the tunnel was allocated a separate storage bin. Upon arrival, the ore was assayed to determine its mineral content. If both the mine owner and the mill agreed on the value, the total ore shipment was sold to the mill and concentration began. 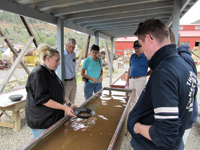 On your self-guided tour down through the mill, you’ll see many pieces of machinery that were used to extract gold and other minerals such as silver, copper and lead from the rock. The diversity of the local ore required many different types of equipment. One example is an amalgamation table. Amalgamation is the process of removing gold by absorbing it in mercury while other metals and waste rock wash away. The gold and mercury mixture (amalgam) was heated, causing the mercury to vaporize and leave nearly pure gold behind. Flotation cells were another major concentrating method used in the Argo Mill. Finely ground ore was combined in a complicated chemical/water/oil/air mixture. Metallic particles then floated to the top and formed a froth. This gold-bearing froth was skimmed off and dried.

At one point, seven concentrating tables were in use at the Argo. The vibration of this type of table caused powdered ore to separate into bands of heavy and light materials as it washed across wooden ridges. Heavy gold could be removed in this way and further concentrated by amalgamation, flotation or cyanidation.  Today, one of the mill’s old cyanide leaching tanks serves as a photo gallery, which is located in the museum on the bottom level of the mill. You can actually walk into the round tank and admire an interesting collection of black and white photos of early local mining activities. Just try not to think about all those caustic chemicals of yesteryear! 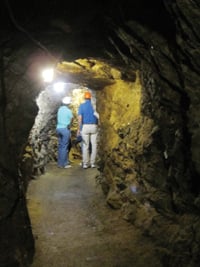 Several varieties of ore-crushing and grinding machines were also at work at the Argo. The arrastra, ball mill, and tube mill functioned to break up the ore and expose the individual particles of valuable metals so they could be separated from the waste rock. Twenty 1,050-pound stamps were also used to pulverize gold-bearing ore. No amount of earplugs could block out the deafening noise of a stamp mill!

Operations at the Argo Mill and Tunnel continued quite successfully until a fatal accident on January 19, 1943. Four miners working in the tunnel blasted into a water-filled shaft (pumping had stopped and the unused area had not drained), causing a huge wave to flood out the tunnel entrance, instantly drowning the four men. For hours, the water blasted out of the tunnel like a fire hose. Coincidentally, it wasn’t long after the accident that the federal government ordered all gold mines in the United States to shut down because they were not considered essential to the war effort. The profitable era of the Argo Tunnel and Argo Mill came to a close.

Throughout the ages, all hard rock miners have contended with many of the same challenges: water drainage, ventilation, and economical transportation of their gold bearing ore to a processing mill. Fortunately, these problems were resolved for 30 years, allowing $100 million of gold ore to be processed— and that was back when the shiny stuff was only worth $18 to $35 per ounce. Just think what that value would be today— Eureka!

Denise Seith is a freelance travel writer and treasure hunter in Salem, Oregon. She and her husband, Larry, own www.GoldRushTradingPost.com, an online prospecting equipment and supply store.

For more things to see and do in and around Idaho Springs, visit clearcreekcounty.org.