You are here: Home / Blog / Rockcliffe Mansion—A Treasure of the Gilded Age
This post may contain affiliate links or mention our own products, please check out our disclosure policy here. 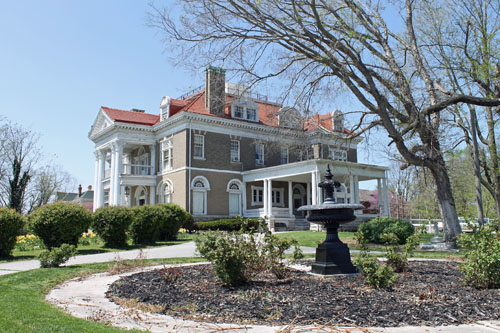 Over the years, we have visited several mansions in different parts of our country. Ironically, many of the men who built such houses did not live long enough to enjoy the fruits of their fortunes. However, lumber baron, John Cruikshank, built his dream home and lived in it for 24 years. Mr. Cruikshank’s desire was to erect the finest home of his day, showcasing the best woods of his trade. He also wanted his magnificent house to sit high atop a Hannibal hill with views of the Mississippi River and the logs from his lumber operation floating on its wide muddy crest. From his front porch, he wanted to see his cemetery plot in Riverside Cemetery. One obstacle stood in his way—the Cruikshank family home. A three-story frame house, built by his father when he established businesses in Hannibal, sat on that particular rocky cliff at the top of the river port town. So the wealthy and successful lumber man set out to do the near-impossible. He had the entire house hoisted onto logs and moved by mules 350 feet to the site where it stands today. Well-known architects Barnett, Haynes, and Barnett, designers of the St. Louis Cathedral, the Governor’s Mansion in Jefferson City, and the St. Louis Post Dispatch Building put their talents to work on the Classic Greek Revival house, built at a cost of $125,000. The home’s furnishings, hand-carved pieces selected and shipped from all parts of the globe, cost an additional $50,000, somewhat less than the $75,000 price tag for the property’s landscaping. In 1900, after two years of building and furnishing, Mr. Cruikshank moved his wife and four daughters into the mansion he proudly named “Rockcliffe.” In a special 1902 article in the St. Louis Post Dispatch, the newspaper called Rockcliffe “The Finest Home in Missouri.” 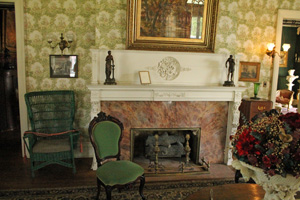 One of Ten Fireplaces in Rockcliffe

The house boasts gigantic rooms and halls with palladium windows and ten marble and tile fireplaces. Only the fireplaces in the Reception Hall and the Red Room burn wood. In the other rooms, the ornate fireplaces burn gas logs and have elaborately hand-carved mantles matching the specific room’s décor. Mr. Cruikshank chose the finest oak, walnut, and mahogany for doors and window facings. Some pocket doors have two beautifully-grained woods laminated together, each side matching the trim of a particular room. However, in any room in which Mrs. Cruikshank presided, she had the solid wood painted white. Gold gilt wallpaper imported from France covers many walls of the massive home. Tiffany chandeliers and a large stained glass window on the landing of the grand stairway are products personally commissioned by Mr. Cruikshank at the Louis Comfort Tiffany Company in New York. 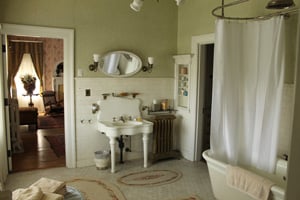 The great house was built with plumbing, electricity, and gas. However, the owner thought electricity was a fad. Yet when the Cruikshanks entertained, which they did often, Mr. Cruikshank showed off the electric light that automatically came on when a door to a coat closet on either side of the front door opened. The Cruikshanks entertained lavishly. In 1902, Mark Twain, a personal friend to John Cruikshank, visited Hannibal for his last time. The Cruikshanks honored the famous man, who spent ten years of his childhood in Hannibal, with a reception. Furniture in the Reception Hall at the foot of the grand staircase had to be moved to accommodate the 300 invited guests.  A hot and humid evening along the Mississippi River added to the discomfort of Twain admirers standing shoulder to shoulder and spilling over to the large porches. Mr. Cruikshank asked his friend to keep his comments to the crowd brief. Twain agreed, and then spoke for an hour and fifteen minutes. 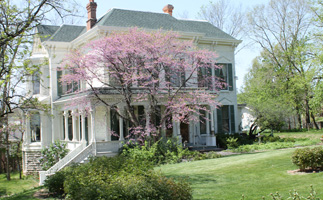 By 1920, the Cruikshank’s daughters were either married or engaged to be wed. After Mr. Cruikshank’s death in 1924, the large mansion overwhelmed Mrs. Cruikshank with its size and maintenance. She had the windows boarded and the doors locked before moving to the family home that Mr. Cruikshank had skidded to the side of the new mansion. A daughter then lived in the house. The magnificent Rockcliffe with its carved marble and tile fireplaces, thick-paned windows,  and doors, mantles, and trim of the finest woods fell silent—abandoned—for 43 years.

The children of Hannibal claimed the stately mansion as their own “haunted house,” with an occasional boy or girl tip-toeing to peek through the boarded windows into the mysteries of the grand old home. Missouri wind and weather took its toll on the structure, and a few vandals broke into “Missouri’s Finest Home.” Eighty of the 125 windows were broken. A fire had been started on a side porch. The other porches rotted. The imposing front columns were braced by two-by-four beams, keeping them erect. Many townspeople believed the grand structure presented a hazard to children at play. The house was scheduled to be razed.

A Grand Downstairs Room in the Mansion

Within a week of the scheduled demolition, three local families purchased the old Rockcliffe—people who recognized that the mansion had been built by a lumber baron who supplied the finest quality of building materials. With its double brick wall construction on a shelf of rock, the old house stood more solid than most houses built 75 years later. In closer examination, the house had settled on its rock foundation only 1/16th of an inch. The massive pocket doors on the interior still slid smoothly into their wall casements. The new owners proposed to restore Rockcliffe to its former grandeur. As they scrubbed walls and fixtures clean, townspeople joined in the excitement. Many donated items similar to its former furnishings. Fortunately, one Cruikshank daughter had stored a quantity of linens, lace curtains, and original furniture from Rockcliffe’s earlier days. Today, the entire mansion is a testament to the ingenuity and craftsmanship of 19th century builders—and to John Cruikshank’s dream of a home on the highest hill in Historic Hannibal.

The home is open for guided tours and receptions. Bed and breakfast accommodations are also available. Visit www.rockcliffemansion.com for hours of tours and rates.