You are here: Home / Departments / RV Industry News / RV Life Blogs: Recycling Trees into Art
This post may contain affiliate links or mention our own products, please check out our disclosure policy here. 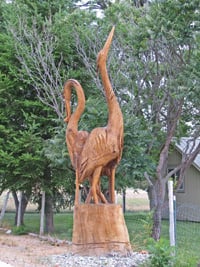 As our writers travel the country, they find all sorts of interesting and surprising things to write about and photograph for their blogs at rvlife.com. Take, for example, a recent blog by Sharlene Minshall about the impressive chainsaw carvings that she ran across in a little town along the Columbia River in Eastern Washington.

Sharlene’s blog entry is reproduced here, but for other entertaining stories and photos, make it a habit to check out all the blogs at rvlife.com. Most writers post new stories on their blogs every week.

The Silver Gypsy: Carving a Menagerie
One morning last September when daughter Janet and I took a few days to explore the Northwest, we started down Foster Creek Avenue in Bridgeport, Washington, and as we continued along, we realized it was lined with intriguing wooden carvings. Bears, bobcats, salmon, owls, herons, eagles, wolves and rabbits lined the streets.  We had to stop, turn around, and drive it again.

Without anybody around to ask, we continued our trip. When I returned home, the Internet solved the mystery. New curbs and sidewalks were being put in and in the process, the trees would be made unstable and dangerous. The city also realized the trees were diseased and harbored insects. The evenly spaced sycamore trees have now been docked, limbed, and carved into a unique menagerie by Bonney Lake chainsaw sculptor Jacob Lucas.

At 14 feet tall, you don’t just pass on by these wooden carvings of animals without noticing. They are eye-catching for sure, and you need to stop, get out, and look at the marvelous detail. A local resident came up with the idea of preserving the trees by turning them into works of art. New trees will be planted between the carvings by the Okanogan County Master Gardeners.

The woodcarvings are sanded into smoothly finished works of art, some blackened with torches, others finished in such a way that it brings out the wood’s blonde color. The Bridgeport High School mascot is a mustang and that is painted black. School colors are orange and black.

In explaining his work, Lucas says he is not sure what a piece will look like until he is working with it. He works the knots into the carving. At the time we saw them, the sculptures were all animals but there is the possibility of a pioneer trapper and a fisherman.

Lucas expects to have the sculptures finished by the summer of 2014 at a probable cost of $60,000. The city is accepting donations of any size to pay for the project. Individual carvings may be sponsored by groups and businesses.

If you have any interest in donating, contact the Bridgeport Chamber of Commerce.

Sharlene Minshall writes the “Silver, Single & Solo” column in this magazine and “The Silver Gypsy” blog at rvlife.com.