You are here: Home / RV Lifestyle / These RV Nomads Have Become Boondocking Experts
This post may contain affiliate links or mention our own products, please check out our disclosure policy here. 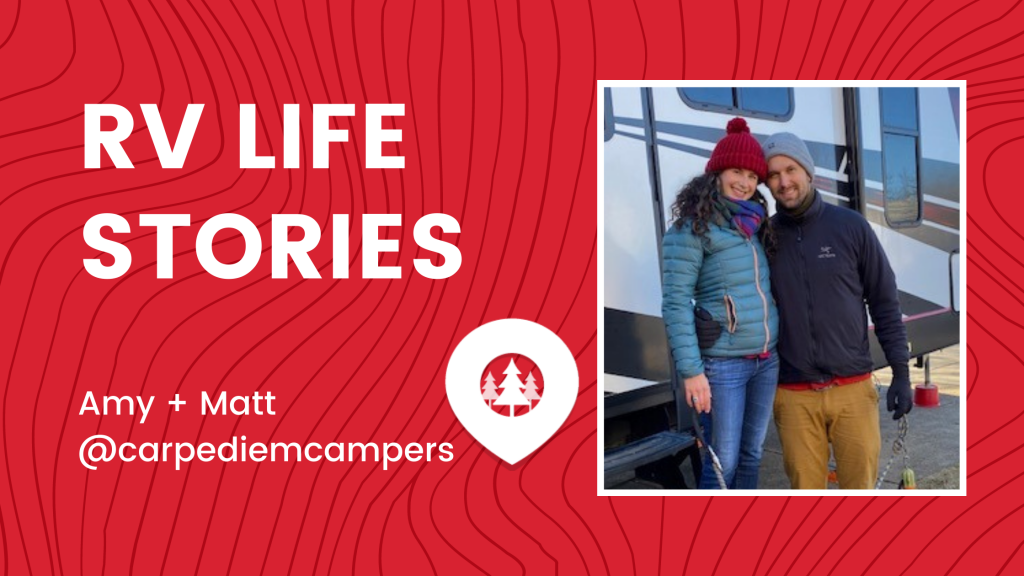 Matt and Amy are the faces behind @carpediemcampers. If you aren’t familiar with the phrase, “carpe diem” is a Latin aphorism, usually translated to “seize the day.” Generally, this phrase is used to urge someone to make the most of the present time and give little thought to the future.

In the case of Matt and Amy, they are definitely making the most of their time. This RV nomad couple has lived full-time in their fifth-wheel for over 3 years. They travel the country, go boondocking, and explore with their two dogs and cats.

Before they were RV nomads

Like many others, Matt and Amy jumped into RV life without any prior RV experience. They aren’t the only ones who are first-time campers. In the 2021 North American Camper Report, KOA reports that in 2020 there was an influx of new campers at a rate of 5 times the numbers in 2019.

Like others in a similar life stage, Amy and Matt experienced a sentiment of “feeling a little stagnant at home with their jobs and routine.” Amy had always wanted to explore New Zealand for an extended period of time. But, like many, they were tied down and owned a house and had dogs. Adventuring in an RV was a unique option for them to explore the country and capture the same vibe as exploring New Zealand.

The jump into RV life wasn’t sudden for them, though. After being sparked and intrigued by the documentary Minimalism, they began to consider, “What would be possible if we had less?” They also started listening to podcasts. Matt and Amy said that their favorite RV podcasts are RV Entrepreneur, Don’t Quit Your Daydream, and Technomadia. From there, they discovered the welcoming RV community.

After 1.5 years of planning, saving, downsizing, and figuring out things that could work for them, they joined the full-time RV life. 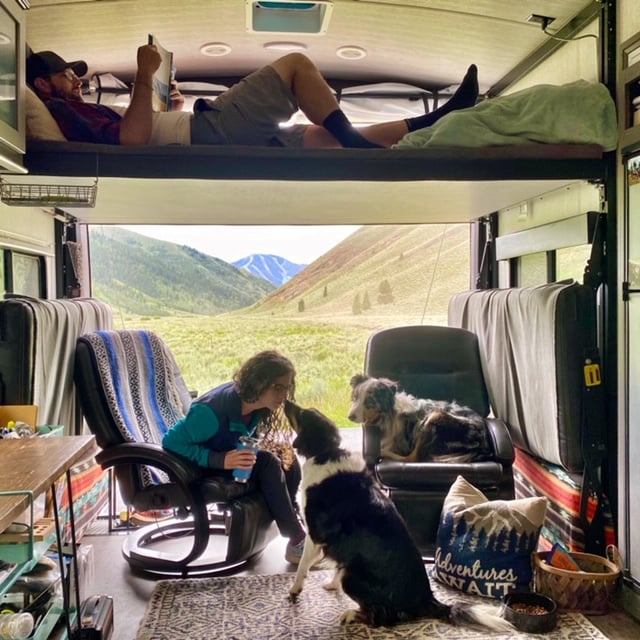 The first challenge in buying an RV for this RV nomad couple was finding a rig that would work for them. After all, Matt is 6’6″. The average height of a typical RV is somewhere between 6’6″ and 6’10” – with the slide height being even less.

They were also hunting for a used rig. Because they were new to RVing, they didn’t want to buy a brand new RV in case they didn’t enjoy the lifestyle. After some back and forth with some sketchy dealers, they found a rig and bought it with cash.

After getting out and boondocking in their 10-year-old rig, they started having issues. Their original RV home was a 36′ fifth wheel with opposing slides. They discovered that they really enjoyed boondocking. They also discovered that having a smaller rig can make boondocking easier. After confirming they enjoyed the RV lifestyle – in fact, they say  “we’re obsessed with this” – they traded it in for a 26′ toy hauler.

Their Cruiser Striker toy hauler is perfect for their boondocking lifestyle. The big garage door is a great feature and they say “you can bring the outside in.” (And isn’t that what camping is all about?)

What makes this rig good for boondocking?

After switching to a smaller rig that is better for boondocking, some key features that the Cruiser Striker has are: 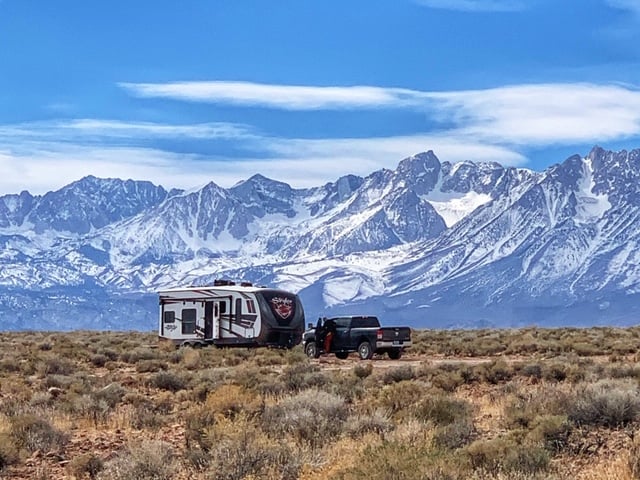 These adventure RV nomads travel in their 26′ toy hauler

How do they find boondocking spots?

Matt and Amy gave up the preconceived societal rules, and that includes the use of plans. Now, they don’t like to have firm plans for when they go boondocking.

We go where the wind blows us.

Their strategy involves driving to the general area they want to explore and then looking for a good boondocking spot. If they are wanting to visit a particular National Park, they look for surrounding areas to make their base camp. Typically, they stay within 20 to 40 miles of town in order to have sufficient amenities for Amy to work.

They do have a specific vetting process for their boondocking sites though. They learned a lot in the first year of boondocking.

An example of their no plans rule? Once they had planned to stay and explore Salt Lake City for 6 days and ended up spending 3 weeks!

The freedom and flexibility are what makes this lifestyle so great for these RV nomads.

Boondocking for a 3-month period

With their RV set up, they can make their water last for 2 weeks when boondocking. In addition to their large water tank, they also have 6-gallon jugs in the truck that are easier to fill up when things start to get low. 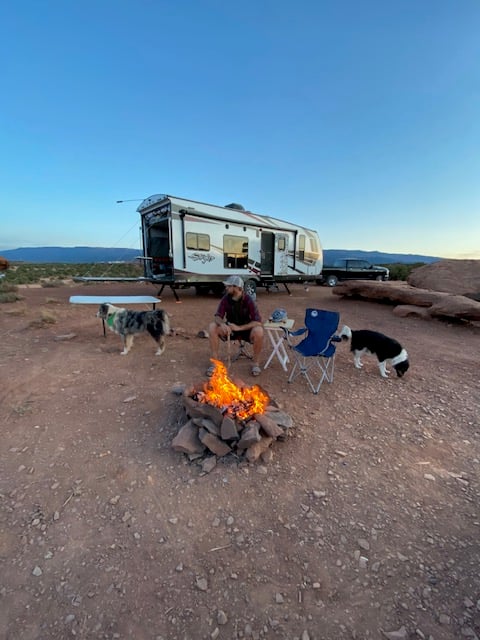 There is more to boondocking than picturesque views though – sometimes things can get scary! But as the saying goes, “a smooth sea never made a skilled sailor.”

On one of their first boondocking experiences, they barely missed out on a tree collapsing their rig. There was a 180-foot tree swaying near the rig that Matt feared would crush them. That same weekend, another RV in the area had to be towed out because they weren’t so lucky.

Back in their first year of being adventure RV nomads, these two learned a lot about vetting RV spots. They were in California on the Lost Coast and had picked out a spot. It took over an hour to drive up the windy roads that just kept getting more narrow and bumpier with nowhere to turn back. At the top, it was almost dark. That wasn’t the worst part – their freshwater was empty! At some point on their harrowing drive up, they had bottomed out and inadvertently caused the tank to drain.

They found a tiny spot to turn around. In act of getting turned, there were times when half the fifth wheel was hanging off the cliff! They then had to drive down the windy cutback road in the dark.

The biggest lesson they learned in this incident was that one of them has to stay calm in these types of situations.

Now, they use online tools to make sure the roads aren’t too windy. In general, they recommend scoping out spots ahead of time if possible. 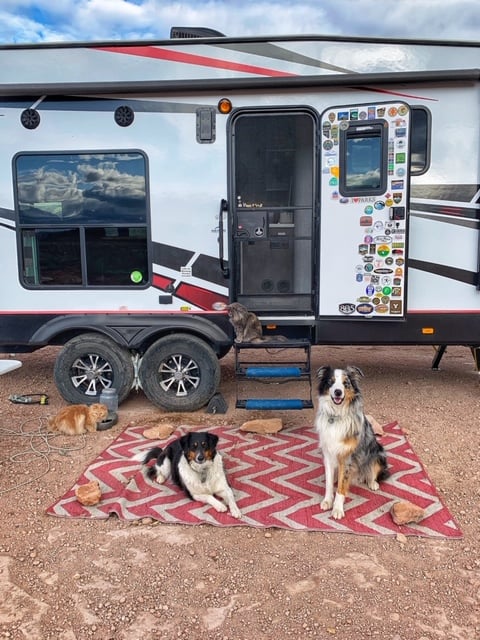 What’s next for these RV nomads

There’s no slow down in the future for these adventure RV nomads.  As they stated, “We’re obsessed with this.”

The ever-changing views of their adventure lifestyle are too great to give up. Even though they miss their family and friends at home in St. Louis, RVing has given them the opportunity to visit family across the country. 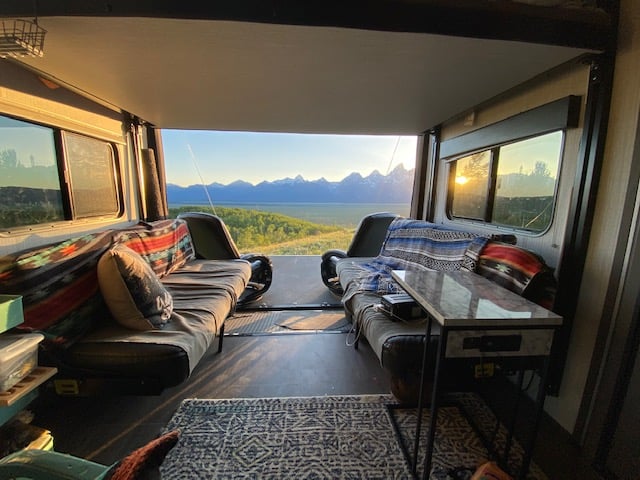 Matt says that “the new experience is what sold [him]. When you first start, it’s like a honeymoon phase, but that has never gone away…” Being an RV nomad has also allowed them to discover new passions like fly fishing. Amy also creates responsibly crafted earrings.

You can follow Matt and Amy’s RV adventures on their Instagram, @carpediemcampers. For more tips on dry camping, check out the video below. 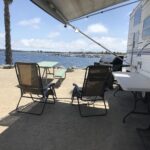