You are here: Home / Blog / RV Solar Power Pros and Cons, Part 1
This post may contain affiliate links or mention our own products, please check out our disclosure policy here.

Many new full-time RVers hit the road without solar power systems on their rig for two big reasons: 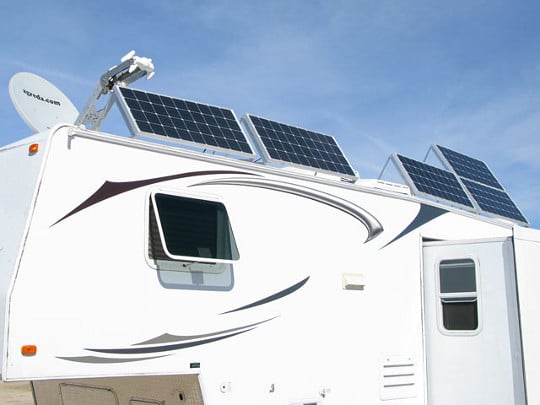 Waiting to invest in RV solar power seems like a smart move if you fall into either of those two categories. But if you’re like my husband and I, and you already know you enjoy getting off the beaten path and deep into the woods or far into the desert, paying for a good RV solar power system before you hit the road is a better idea.

Still undecided? Here’s my list of RV Solar Power Pros and Cons, as requested by one RV Life blog reader. Keep in mind I’m not a RV solar expert, but I have absorbed a ton of information by observing how my husband has dealt with our systems over the last eight years as full-time RVers.

RV solar power can be expensive. 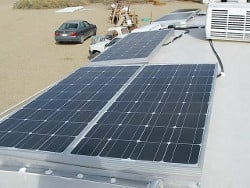 Well, let me back up; a cheap system that costs, say less than $1000, is definitely helpful but it’s probably not going to power everything you need to be comfortable. Our first system (about $1800 back in 2008) wasn’t large enough for us, even after we made a few upgrades. When it came time for a new-to-us RV, we made sure to invest enough in RV solar to power all of the items we feel make our lives comfortable and productive. Keep in mind, we don’t have television but we do have a mobile satellite Internet system, which is a big energy hog. Everyone has different power needs.

I was especially surprised that the cost of our robust system (around $3700) was about the same as it would have been eight years ago. Unlike domestic home solar power systems, RV solar pricing hasn’t decreased as much as I assumed.

In case you’re wondering, the main components of our new RV solar power system include:

RV solar power can be complicated.

Again, I preface this by saying that I have no tolerance for learning about electricity or any of the things you must do to plan for the right RV solar system, like performing an energy audit. You can pay someone to do it for you, or figure it out like my husband did. Once the system is installed, it’s pretty self-managing but occasional glitches do happen. You can read about my husbands RV solar observations, here.

One of the reasons RV solar is awesome is that it can greatly reduce your camping fees, if not eliminate them altogether. Each season we head out to the Southwest for several months and we enjoy free camping on public lands while living off grid. Both times we decided to buy RV solar, it paid for itself in just a few months because we practically eliminated RV camping fees. However, that’s just us – we love dry camping and rarely stay in RV parks. Therefore, depending on the complexity of your RV solar system and how often you dry camp without hookups, you’ll need a hearty dose of patience while you wait to recoup the investment.

If you have a RV solar electric system, I’m really curious how my own list of RV solar cons compares with yours. Do my theories match up? Let me know below.

Now that we have a few of the negative cons of RV solar behind us, next week I will share my top three reasons why I know RV solar electric systems rock!