You are here: Home / Blog / RV Travel Tales: A Day in Glacier National Park
This post may contain affiliate links or mention our own products, please check out our disclosure policy here. 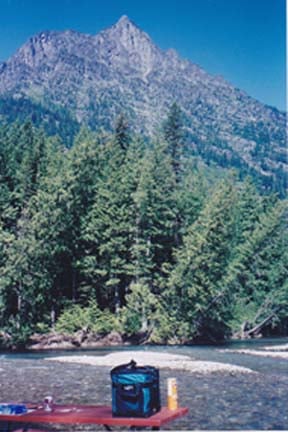 From childhood, I’ve been a romantic, dreaming of walking in forests, overlooking waterfalls, and eating lunch by a clear, gurgling stream. One summer day, Lee and I found a picnic table right at the edge of McDonald Creek in Glacier National Park. We unpacked our sandwiches and drinks and sat looking up at a tall stone mountain that rose from the opposite bank of the stream almost to the blue sky. Crystal clear water rippled over magenta, pink, brown, and reddish rocks in the creek bed. “I’m living my dreams,” I thought to myself—and perhaps, even out loud to my husband. Of course, I had to be past 60 years of age before I experienced any of those fantasies.

We had parked our motorhome in Sundance on the west side of the park and started on the Going to the Sun Road early that morning, stopping at almost every pull-out to marvel at the beauty of the mountains capped with snow. Lush green valleys of fir trees spread below the curves of the narrow roadway. Although we snapped dozens of photos, I had to agree with a quote from George Bird Grinnell, a prominent person in the development and preservation of Glacier National Park: “Pictures seem to dwarf the majesty of the mountain peaks.”

At McDonald Lake, we watched ducks with russet heads paddle past. They looked like the mechanical ducks one sees at carnivals, their legs rotating at the hips. The ducks swam so fast that they appeared to be running rather than floating.

After lunch, we stopped at the Logan Pass Visitor Center and took the boardwalk trail climbing a hill into a meadow strewn with a carpet of red, yellow, white, and lavender wildflowers. Almost immediately, a white, shaggy mountain goat ambled across the boardwalk. He stepped off into the meadow apparently oblivious to the numbers of people snapping pictures as he munched on the flowers. The higher we climbed, the more goats we saw, some of them in groups of three or more. At one point, a young kid crossed the path in front of me, so close I could have brushed my fingers across his thick furry back. But I did not dare!

In addition to the colorful pebbles in the streams, we discovered different rocks along the Logan Pass Trail. In a book I bought in the Visitor Center bookstore, I read that the rocks in the Helena Formation range in color from gray to tan to brown and are quite visible in the mountainsides that we observed as we climbed the trail. The varying colors indicate the depth of water when the sediments were deposited literally millions of years ago. At some points, ribbons of a particular color appeared to run around the side of the mountain. Above the Helena rocks, the green and red argillites of the Snowslip formation extend upward on Clements and Reynolds Mountains. The green and red hues are caused by iron in different chemical combinations. Again, the depth of the water during deposition controls the color of the rocks. Little or no oxidation happens in deep water and the result is the green of oxygen-poor compounds. The red shade is caused by the oxidation or rusting that occurs when iron is deposited in shallow water. The red was more evident to me, but it was interesting to spy the green rocks, not only on some of the mountainsides, but cropping up along trails.

Daylight stretches the clock during summers in Glacier National Park. As we returned to our motorhome at twilight, we stopped at a trail—actually, a boardwalk—that led into a cedar glade. The soft sounds of the forest wrapped us in a peaceful cocoon as the wind gently rustled through the tall red cedar trees. At 9:00 when we unlocked our motorhome door, darkness has not yet dropped its nighttime shade.