You are here: Home / Blog / RV Travel Tales: A Rest Stop Encounter
This post may contain affiliate links or mention our own products, please check out our disclosure policy here. 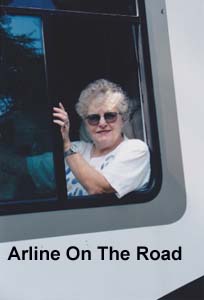 Meeting people on the road is one of the bonuses of my RVing lifestyle. Some have become lifetime friends; others are mere acquaintances. However, the woman I met one May afternoon in a Tennessee rest area is simply an interesting encounter. I traveled alone that day, in route to a Life On Wheels Conference in Bowling Green, Kentucky. My companion dog, Carmen, had become extremely ill, and our veterinarian advised that she not accompany me. I missed not taking her out when I stopped to rest, and I felt a bit lonely when I prepared my sandwich. I looked out my window and spotted a lone woman at a picnic table, so I gathered up my plate, drink, and napkin and trekked over and asked if I might join her.

For the next half hour, she talked non-stop, never even taking time for introductions. A former teacher, who lived at that time in Mission, Texas, she said she was headed for a park in Knoxville, Tennessee. She had been traveling since early May, camping out of her van, and was ultimately going to Hershey, Pennsylvania.  Later, she planned to motor on to Bethlehem, Pennsylvania, for her 50-year college reunion.

She told about the innovative basic math program she had put together for “slow learners” when she taught school. On the first day of class, she had established the ground rules by posting her martial arts certificate on the bulletin board! Then she went to 50 businesses in the town and asked for a math problem each one encountered on a single day for a month. No business refused, and a carpenter gave her more than 30 problems to solve. She took those practical, down-to-earth situations back to her class to solve. The carpenter even visited her classroom and talked to kids who might be interested in his craft. Her students not only learned the practicality of math, but they thrived under her strict supervision.

To illustrate, she told about founding the music festival in Bethlehem. A few years prior she had worked in a booth during the festival and a man and young child approached. The dad, his hand on the kid’s shoulder, said, “There! She’s the one!” He pointed to the woman who held my attention during that lunch time on a spring day. Without catching a breath, she went on: “The man explained that his son was slacking off and he had told him that if he didn’t straighten up, he was going to send him to the teacher who had turned around his life.”

On a personal side, she said she had been the youngest of four sisters; indeed, fourteen years younger. She married an alcoholic and raised a son and daughter.  The marriage was not happy, and when the son left for college, she hitched a fifth-wheel trailer to a truck and traveled the United States for four years, spending a month in each state. Later, she switched to a motorhome. But on that day, she explained that she had settled in South Texas due to needing warmth in winter for a back fusion she had endured. With wanderlust still in her blood, she drove a van along her summer routes.

I finished my sandwich and bid this interesting lady good-bye. I still had many miles to go to my destination in Bowling Green. After I got back under the wheel of my motorhome, I chuckled to myself.  She had never even asked where I was traveling!