You are here: Home / Blog / RV Travel Tales: A Small Town Character
This post may contain affiliate links or mention our own products, please check out our disclosure policy here. 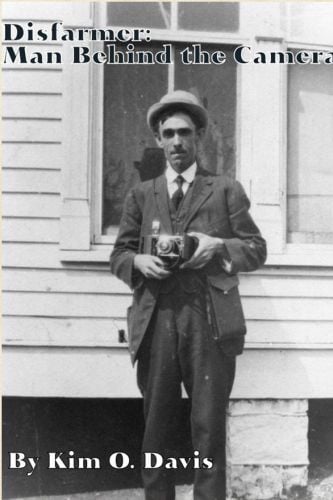 Every small town has at least one “character,” someone who is a bit eccentric, peculiar or unconventional. Some times a town has more than one—or perhaps, an individual who stands out in different generations. My hometown of Heber Springs, Arkansas, is no different. From the 1920’s to the 1950’s, Mike Disfarmer worked in our town as a portrait photographer. The cranky, odd man of German descent photographed in an American Gothic style a steady stream of farmers, housewives, babies, young children, and soldiers off to WWII. The late Fay Olmstead, who grew up with enough cousins to fill two wagons for a Saturday afternoon trek into town, recalls going in for a group picture at the studio. “It was something to do,” she said. “It cost a quarter and we had a picture in our hand to mark an occasion.”

In his Main Street studio, the disheveled and peculiar man, remembered by local folks as spooky or weird, pointed his subjects to a stark white or solemn black backdrop, and grunted  “…stand still.” He disappeared underneath the light shroud of his portrait camera to snap their pictures for pennies. That is, if the mood struck him—or the north light from his studio’s vertical skylight danced certain shadows across his subject’s faces. Sometimes with no explanation, he said, “Not shooting today!”

Almost fifty years after the death of the maverick portrait photographer, two New Yorkers came knocking on doors and offering cash for vintage photos stashed in albums, dresser drawers, and old trunks. The images Mike Disfarmer transferred from glass negatives to paper for mere nickels drew up to 1,000 pieces of silver.  In the art and photo world of New York, critics hailed the nonconformist photographer as one of America’s greatest portraitists. He captured a spontaneous reality absent in work by city photographers. In Original Disfarmer Photographs, edited by Steven Kasher, an essay by Alan Trachtenberg states, “Disfarmer worked by instinct, knowing what was right for a photograph. He knew how to fill a frame and made no effort to change the angle of a head or elicit a smile. No one knows what mixture of precision and passion he performed under the dark cloth.”

Yet, those he photographed believe the crusty old man who framed himself in fanciful tales simply shot photos as he had learned from an older photographer as a means of eking out a livelihood. He worked with handmade cameras, using only two lens, a 12-inch Tessar made by Bausch and Lomb mounted on a Wollensak Betax number 5 shutter, and a shorter Wollensak Double Anistigmatic number six. He persisted with slower glass plates rather than celluloid. Some of his cameras and equipment are on display today at the Cleburne County Historical Society in Heber Springs.

Times were hard in and around Cleburne County in the Arkansas Ozark foothills for the first half of the 20th Century. Farmers scratched out a meager livelihood on rocky hillsides. Loggers clear cut and hauled away the county’s biggest natural resource—trees. Disfarmer’s photographs, mostly in a 3 ½ by 5 ½ postcard format, revealed folks as they were, typically rural people coming to town for Saturday shopping. Many wore work clothes of that era—rumpled pants, bib overalls, and print dresses. Some posed with hunting dogs—or a big catch from the Little Red River. A few wore bandages on fingers or scrapes on knees. On occasion, a cigarette dangled from a smirking mouth and a hat jauntily covered a home-style haircut. Few smiled, not even embracing young lovers or dads holding a firstborn.

While art critics state that souls were bared, local historian of Heber Springs, Dr. M.E. Barnett, believes subjects wore expressions of gloom or fear because of the eeriness of the Disfarmer Studio and the frightening old photographer who worked in silence. The question is posed:  Why did people continue to file into his studio for portraits? The late Dr. Gerald Pearce said his parents had Disfarmer take his picture in a cap and gown because… “I was the first grandchild to graduate high school!”

From Cleburne County history, Dr. Barnett recounts that Mike Meyer came to Heber Springs about 1914 with his mother and other relatives from Stuttgart, Arkansas. As a teenager, he first practiced photography in a partnership with a man named Penrose in a studio in the lavish Jackson Theater on Main Street, perhaps learning his trade. Some photographs found today are stamped Penrose/Meyer Studio. After the theater burned, Meyers established his studio on the porch of his mother’s modest frame home. A tornado that ripped Heber Springs apart in 1926, demolished the Meyer home and the lone photographer built his studio with a living quarters on Main Street. Ironically, Disfarmer claimed that the Heber Springs storm displaced him for a second time in his life. He told an imaginative tale about an earlier tornado back in Indiana that had snatched him as a baby from his true parents and dropped him on the doorstep of the Meyer family. In turn, he believed that the Meyer’s own baby, the real Mike Meyer, had been carried away in the fierce storm.

By all accounts Mike Disfarmer had no friends, except perhaps, alcohol.  Exhibiting his obvious distain for family and neighbors, he legally changed his name in 1939 from Meyer to Disfarmer, disassociating himself from his German surname meaning “peasant farmer.” Still, he exclusively photographed people of Cleburne County, many of whom were farmers. While art critics claim that the aloof man created some of the most soul-revealing portraits of his time, his subjects and their descendants treasure the sense of life in the Ozarks captured forever in the faces and body language of those who stood before his camera.

Upon his death in 1959, Disfarmer left behind no documents or artifacts.  Before his dank and dark studio was razed to make way for a Piggly Wiggly Store and parking lot, former Mayor Joe Allbright bought the contents, including remnants of the photographer’s equipment and approximately 3,000 glass negatives, for a paltry sum of five dollars. His subsequent sale of the negatives to a Little Rock attorney, Peter Miller, and Miller’s marketing of the prints, brought the photographs’ significance to the attention of Toba Tucker. Tucker, who modestly characterizes herself as a documentary portrait photographer, lived among Cleburne County residents for two years during the 1990s, photographing subjects of the original pictures, and ultimately publishing her work in Heber Springs Portraits. In an essay by Helen A. Harrison in the book’s foreword, she states, “In his work, Disfarmer often seems mercilessly frank, like the grumpy relative who enjoys finding fault. As a result, many of his portraits have a guarded quality.”

She goes on to say that Toba Tucker, a genuine outsider in relation to Ozark folks, made a determined effort to allow her subjects extraordinary latitude in self-presentation, encouraging them to reveal their own truths. She says, “In contrast to Disfarmer, Toba was like the wise relative who counsels without contradicting, praises without flattering, and respects confidences.”

In two important aspects, however, Tucker emulated Disfarmer. She adopted his camera and his studio setup, a challenge she says that paid off in the human insight and poetic dimensions of the subjects she photographed many decades after they had stood before Disfarmer’s camera.

Harrison continues, “Without diminishing Disfarmer’s achievement, I say that whatever art we find in his work is a by-product of the commercial portraiture that was his livelihood.  Toba’s primary concern, without consideration of financial reward, is the expression of her artistic intentions. The earned trust and affection of her subjects reflects in their eyes.”

Folks like the late Joe Allbright, Peter Miller, and Toba Tucker first brought Disfarmer’s work to the attention of collectors and artists. Their interest in preserving the work of a crotchety old man resulted in a peek into Arkansas Ozarks culture in the 20th Century. Mike Disfarmer’s unique portraits are included in the permanent collections of the Museum of Modern Art, the Metropolitan Museum of Art, the Arkansas Art Center Museum, and the International Center of Photography in New York.

A new biography of the now-famous photographer, titled Disfarmer, Man Behind the Camera by Kim O. Davis, is available at amazon.com. The author spent over two years interviewing Disfarmer’s Arkansas family members. The book contains never-before-seen photos from Disfarmer’s body of work. Heber Springs Portraits: Continuity and Change in the World Disfarmer Photographed, is still available at www.amazon.com. Original Disfarmer Photographs, edited by Steven Kasher is also available, but in hardcover is expensive. Disfarmer’s photography can be viewed and purchased at www.stevenkasher.com.