You are here: Home / Blog / RV Travel Tales: A Surprising Find in Lebanon, Kentucky
This post may contain affiliate links or mention our own products, please check out our disclosure policy here. 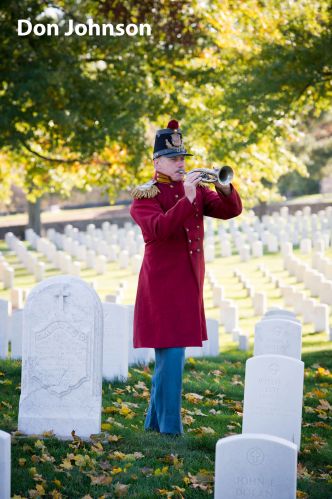 History is on every corner of every street in Kentucky. However, on a visit to Lebanon, we made an unexpected discovery: a room in the Marion County Heritage Center dedicated to baroque trumpeter Don Johnson and the secondlargest collection of horns in the US made by the J.W. Pepper Company. The largest collection is in the J.W. Pepper Museum. Don Johnson’s collection contains many one-of-a kind horns. Johnson won the National Trumpet Competition three times and his two awarded gold plated horns are also displayed.

Don Johnson and his family have lived in Marion County, Kentucky for about 20 years. Without recognition or fanfare, he and his wife raised their children. No one locally knew they had an unbelievable talent in their midst—a musician who has performed at the Kennedy Center, three Presidential inaugurations, toured in Taiwan and Europe, performed at the Smithsonian, the National Archives, and the National Museum. He has recorded for the National Museum of Music. A native of Lexington, Johnson attended the University of Kentucky, following in his father’s footsteps. His son, Don Johnson III, is the third generation trumpeter in the Johnson family.

In 2004, Don Johnson attended the Historic Brass Society Festival. Upon hearing several baroque trumpeters perform, he purchased a Naumann trumpet and began to introduce his friends to its beautiful tones. His fellow musicians were pleasantly surprised with the difference in the tones coming from baroque trumpet compared to their modern trumpets. They were hooked—and started purchasing baroque horns. Johnson decided to start a group exclusively for baroque trumpeters, anticipating church performances and concert series.

Soon Dr. Michael Tunnell started to play with the group on a regular basis, and numbers of his students from the University of Louisville began to sit in on practice sessions.  More and more trumpeters wanted to join the group. In the spring of 2007 an ensemble from the group, Don Johnson, Don Johnson III, Wayne Collier, Joseph Van Fleet on trumpet, and John Bryant playing the timpani, competed in the National Trumpet Competition in the Historic Ensemble Division. They won.

Don Johnson says: “Our concerts are designed to include all of the different styles of music credited to the baroque trumpet: signal calls, cavalry and dance music, duets, solos, and trumpet with voice, which requires playing in different styles and tone colors.

He continues: “The ensemble tries to appeal to different audiences. Some people want to hear only authentic music. This means playing a trumpet with no vent holes, or to say it another way, with no finger holes.”

In their concerts, Kentucky Baroque Trumpets play some of their music with no vent holes to demonstrate the difference. However, Johnson notes that almost all baroque concerts in North America are played on reproduction period instruments, meaning trumpets with vent holes. He says the reason is, partly, to please the modern audience’s ear. While this group respects the purist in musical tastes, they believe there is room for all music lovers in the world. Thus, they also play modern trumpets in their concerts.

Kentucky Baroque Trumpets gained wider recognition when movie producer Stephen Spielberg asked Don Johnson to be the artistic director and create “Lincoln’s Own Band” for the 2012 movie “Lincoln.” Spielberg asked Johnson to replicate President Lincoln’s Marine Band. Johnson’s band played at a train station as Lincoln made his way across America, and Don Johnson himself played a solo. “Lincoln’s Own Band” also performed in the National Geographic movie, “Killing Lincoln.” The red uniforms trimmed with gold worn by band members in both movies are on display at the Marion County Heritage Center.

Kentucky Baroque Trumpets also hosted a master class at Centre Square to coincide with the early June concert. The group invited anyone who could play a brass instrument to join in the rehearsal and to perform with accomplished artists in a selected piece of music at the concert. Kentucky Baroque Trumpets are opening a new musical path in the historic city of Lebanon in central Kentucky.